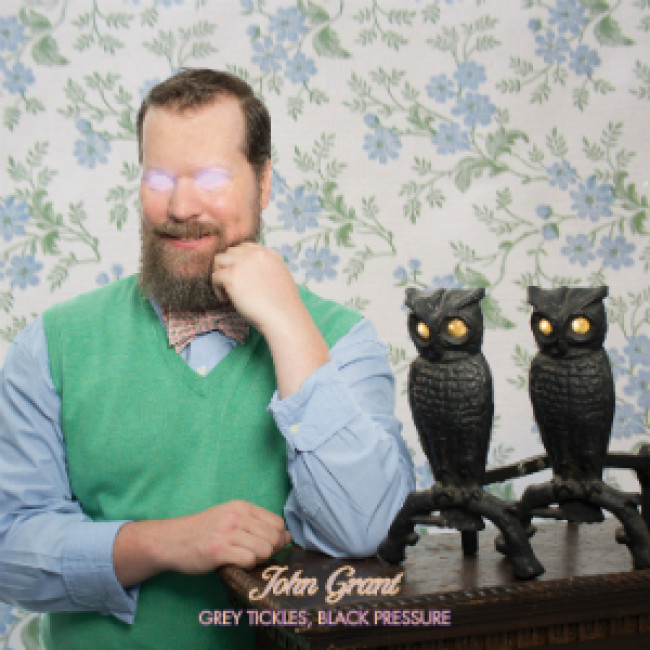 Some say that the job of good music is to elevate living into something more than survival.

Some wish they had lived through the sixties… I wish to be living through John Grant’s career.

I’d have seen him play Liverpool if only I’d been brave enough to go alone and I wish I had been. None of my friends could go and I was ill. It’s a regret I live with.

I couldn’t be more grateful to be living through the same time as the most beautiful male singing voice I have ever heard in my life. I listen to John Grant sing and the world is transformed into something more beautiful than it was a moment ago, no matter how pretty or tawdry the view. My soul feels richer in its presence. Like reading good literature with beautiful prose and an interesting plot. John Grant goes where other songwriters fear to tread. Complaining about being upstaged in the pity department by children with cancer isn’t something most people are willing to sing about (Grant lives with HIV). No matter what you are suffering, there is always someone worse off. The man who brought the word “callipygian” into our consciousness is at it again with his candid expression of desire and appreciation for the male body. It’s genuinely shocking. And for that reason, it’s a sorely needed contribution, not just to music (though it is), but to culture and society. This is a voice that we needed to hear. A psychic once told me “the world needs your song” and I think it’s true here too.

The shock about encountering such lyrics reveals where we have as yet failed to accept ourselves as a society. I get the same reaction from people when I sing about having an orgasm and female sexual pleasure in my music. I think there’s something fundamentally wrong with our culture if such things are taboo. There is a part of me that enjoys the shock value, to shake things up a bit and wake people up for a moment. But the authenticity and honest expression is what makes this music so important and where it serves to connect.

It starts with an “Intro” track, a speech about love… then come voices in foreign tongues… disturbed by electronic interference.

Grey Tickles, Black Pressure opens with the track of the same name. I was wondering what sound he was going to go for this time, given the huge leap from acoustic to electronic from Queen of Denmark to Pale Green Ghosts. My favourite John Grant song is “GMF” and I was delighted that the title track that starts off the album is in that same sound. While simple in terms of instrumentation and arrangement, John Grant excels at satisfying and unexpected, inspired twists of melody. The songs sound like instant classics and trail blazers at the same time. A line I have never heard anyone else tread in quite this way before. I love the detailed thoughts, the stylishness of the personality, the lifestyle being expressed. I am in love with him through his music.

“Snug Slacks” is something like a spoken word performance put to minimalist futuristic funk and reminds me of Beck at his more experimental moments. On “You & Him” it gets spacey and psychedelic electro like some sort of MGMT does Brit Pop mash up- and yes it sounds better than that description. It works. Grey Tickles, Black Pressure is an album that bridges the gap between the conflicting sounds of both previous albums, effortlessly combining the acoustic with the electronic to spectacular effect.

His songs are hymns for the people kicked out of the church. Both in sound and content. His voice is my bliss and I am closer to the creator when I hear it.

“Global Warming” is a beautiful acoustic song… with a soaring classical interlude between the magnificent vocals. It’s a state of the world address. “How am I supposed to live in a world/Without Madeline Kahn?/My Favourite girl is gone” Grant highlights first world problems mixing them in with global issues. “Global warming/Is ruining my fair complexion…and Brazil does not need any more encouragement.” With his signature alchemy he turns depressing themes into gold with the beauty of his voice. It’s a stand out track.

By the time we get to “Black Blizzard” it sounds to me like we are traveling through outer space on an eighties spaceship having a spiritual experience as we leave the Earth behind and catch sight of it through a window.

My natural inclination with music tends to be that most dance music I hear is clinical and slightly soulless, mechanical. So I don’t know what magic this is, but John Grant manages to transform or inform electronic sounds with more soul and spirit than the average musician can get out of a beat up pet acoustic guitar that they’ve carried around and played for the last twenty years.

Quite how he manages to encapsulate the best elements of the Beatles at their best, stand on the shoulders of those giants, to take us somewhere even more interesting, while incorporating new romantic style, futuristic sounds, Massive Attack, church choirs and present day dance music elements is anyone’s guess, but these things collide to great effect on “No More Tangles”. “Geraldine” is radiant. Those chord progressions blow my mind. Feels like I am coming up on something good, a feeling I thought I had left behind in drug-fuelled nights a long time ago.

The album closes with “Outro” – a reading by a child- words often read out at weddings- words with which this album began: “Love is patient. Love is kind… Love never fails.”

In a world starved of music that is original, fascinating and meaningful, after listening to this album, I feel nourished and satisfied. Apart from wanting to play it on repeat to discover all the layers to the lyrics and melodies, to know the stories more intimately, to go traveling for more inspiration for living. To be elevated.

The album Grey Tickles, Black Pressure by John Grant is out 9th October 2015 through Bella Union.