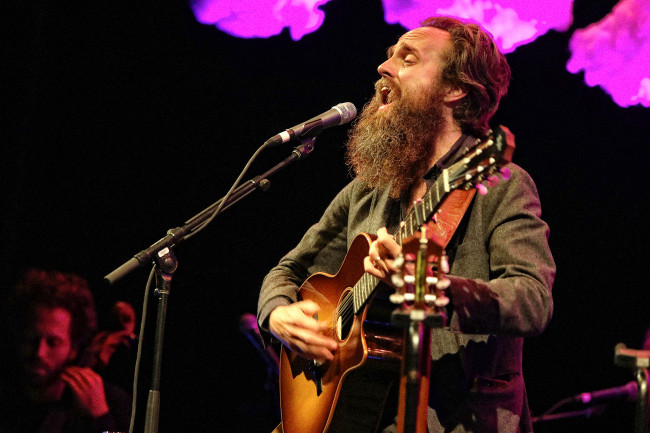 And so it transpires, this weekend is the opening of Sydney’s Vivid Live 2018 festival, in its 10th year. I’ve made the trip up from Melbourne to see Sam Beam and his full band, Iron & Wine, play at the Sydney Opera House having never set foot inside the building. I expected to be pleasantly impressed by the surrounds and the acoustics, but wasn’t quite expecting the scope of the event.

There’s a line in Beam’s song ‘Thomas County Law’ from 2017’s to-die-for album, Beast Epic, that befits this occasion: ‘Nobody looks away when the sun goes down”. And why would you, when on the dot of six, the sun well below the western horizon, the Opera House is transformed into a psychedelic creature. Alive under a sky criss-crossed by lasers and surrounded by twinkling gardens and a glittering black sea teeming with ferries, tall ships and those kinds of cruisers that only the super-wealthy can accessorise.

But all this is merely the support act for what’s to come inside. The Opera House is cavernous, its massive soaring windows and terraces offer prime views to the Vivid light shows outside. The Dame Joan Sutherland theatre itself is more austere, the concrete balcony boxes line the walls like a brutalist mausoleum. However, the stage is softened in placid blue light and a bunch of clouds hover over the collection of instruments waiting on their musicians.

There is polite applause when the super-prolific genius of a songwriter emerges with the band and immediately launch into an uplifting rendition of ‘The Trapeze Swinger’ (Around the Well 2009). The audience have awoken and the gritty ‘Monkeys Uptown’ (Kiss Each Other Clean 2011) ensures everyone’s more animated.

Accompanying Beam on this tour are Teddy Rankin-Parker on cello, Eliza Hardy-Jones on keyboards & backing vocals, Beth Goodfellow on percussion and backing vocals and Sebastian Steinberg on bass. They’re all quite phenomenal musicians and sound perfect in this room. They have fun with the eclectic newie, ‘Last night’, especially Goodfellow who plays a huge array of bells and shells, bowed cymbal and who knows what else.

There are no distractions from giant screens or fancy projections needed here; the clouds that constantly change hue are the only props. The focus is on Beam and his beard and his gee-tar, as it must be. I’ve heard him say before that his voice is kind of flat – not out of tune – but somewhat one-dimensional, hence his love of collaborations. He’s known for some wonderful duet albums, with the likes of Ben Bridwell from Band of Horses (Sing into my Mouth) and Jesca Hoop (Love Letter For Fire was one of my favourite albums of 2016), but tonight it’s the two female band members who provide superb vocals that lift his songs to higher altitudes.

He chats and laughs, sips his glass of red between songs. Someone tells him to just ‘Play a song!’ amid his banter and he acts wounded. Reminds us ‘…I’m the wall between you and your fantasies!’ He gets his own back when someone yells, ‘You’re a legend!’ cheekily telling us how geographically isolated we are if that’s what we think.

The setlist is a great selection, some old, some new. Some are new takes on oldies so they almost feel like covers. Mid-gig he descends to his most lo-fi roots when the band disappear off-stage. He pretends he’s glad they’ve gone, whispers, ‘It’s just us now…’ so the few thousand of us genuinely feel privileged, as if it’s just him and us on the front porch with a whisky and a banjo. The audience is respectful, reverent even.

Beam is a legend, even if he doesn’t think so himself. I reckon these lyrics from ‘Right for Sky’ are pretty apt.

‘If I could choose, I would do things right
Teach my dreams to look me in the eye
Sing my heart out into my hands
Shine where light demands.’

He is a shining light, even when the city is Vividly aflame.