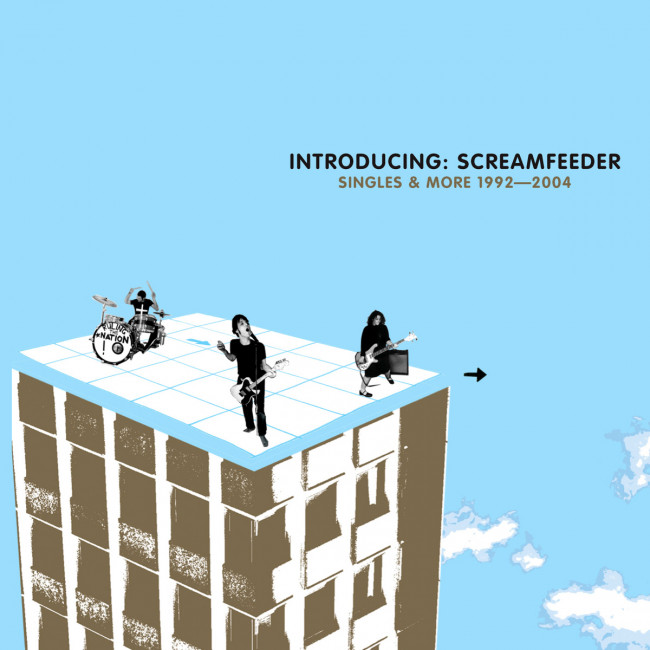 Well, last week, Everett True tackled the Dirty Jeans comp as well – and GUESS WHAT? Though his was inevitably meatier with context, our two reviews basically agree on two points – a) roughly a third of that collection is dry derivative shit, and b) there just weren’t enough chicks represented.

So, guys, I’m pleased – and I do mean it, honestly tickled pink – to announce that one of the champs from Dirty Jeans, Screamfeeder, has recently (hmm!) unearthed their singles and etcetera collection from 2004 and released it on their Bandcamp page as a free download. And, unlike the patchy Aussie alt-comp, this one is all-around MEGA.

The mega-power-pop entity that we know as Screamfeeder emerged in 1990 or so (or maybe 1989 – the stories always change), after a key personnel swap in Tim Steward’s band: the bass-playing bloke walked out and Kellie Lloyd stepped in, not only to fill his bass-playing shoes but also to lend cheery, non-fuss vocals to Tim’s charming, fey persona. You can hear the difference from the get-go: “Dart”, with Kellie, is a knock-out golden tune, a true belter of the best Breeder caliber, replete with a childhood call-and-response bridge.

“Wrote You Off”, however, is about as 3 Doors Down as you could get, all angsty chords and razor-edge romance – except, y’know, seven years before “Kryptonite”, and therefore better by default. BOOM.

But, anywho – with or without Kellie’s sparkling vocals, something shimmers about Screamfeeder. Is it Tim, with the breathy, wispy charm that floats over even the meatiest of rock frames (like in “Lost in the Snow” or “Above the Dove”)? Yes, but the real watermark is that solid riffage, that surge of careening feedback and pulse-racing bass that fills the ears, fills every space in the room with pure radiant youth. Even in the brazen, grungy “Fingers & Toes” (in which the usually pristine Tim actually goes hoarse), you can see/hear it shine, some buried beacon under the dirt-stained veneer.

Tim and Kellie earn points for music college-friendly lyrics, too. Imagine – “Hi Cs” alludes not to the fruit punch, but notes; “Fill Yourself With Music”, though it smacks ya with happiness like a sledgehammer over the head, praises the euphoria of melody hand-in-hand with the euphoria of being loved. Pavement-esque, this latter one is, without being Pavement at all. And let’s not forget “Mr. Tuba”, a delight of a pop anthem that rebels against, erm, a demanding tuba player: “Mr. Tuba, your sound, it’s beautiful and round, but you don’t listen/the rest of the band are tired of playing your tune” Yes. Please, yes. Why the hell not?

Above all, it’s the poppiest stuff that’s gripped me. Like “Mr. Tuba”, but most especially “12345”. Cute little mini-synth sounds. Sweet and simple chorus. The only way to perfect this lovely bit of whimsy is to gather all your closest kooks and dance in the privacy of your own home, away from all the arena-career-rock eggheads and grimy guitar lords.

They got a knack for it, I’ll tell ya what. Screamfeeder do follow formulas, I can’t deny that – but instead of the dull, straight-faced urban murk that smeared the alt-rock 90s airwaves, Tim and Kellie romp across the stage with child-like abandon. The sound’s as disposable as candy wrappers, but hey, when you’re a kid (as you may be when listening to Screamfeeder – so immediate and immature is the joy that streams from their songs), you collect every little scrap and keep ‘em safe in your closet.

But. But but but. Then something happens at the end. Something I never, ever would have expected from a band that maxes out at 4-minute thrills: a “Tomorrow Never Ends” cover.

Naturally, Screamfeeder aren’t the first to do this. My particular favorite is the utterly transcendent Chameleons version, which is so logically theirs that you’d swear Burgess wrote it. But, actually, that’s precisely what happens here – the Aussies seize the psychedelic classic and mold it to their own blissful noisy image, while still embracing the spaced-out core of the first. Glorious.

What this proves, ladies and gents, is that Screamfeeder should be mentioned in the same breath as the Breeders, the Pixies, or the Throwing Muses when we think about high-class boy-girl revolutions in the alt-rock hemisphere. In fact, I betcha a million dollars that, if the lovely folks of Screamfeeder did hail from the US, they WOULD be in that canon, without question.