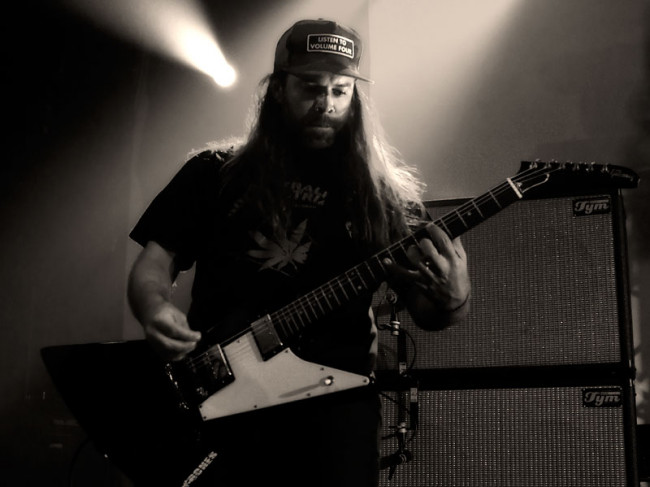 Driving the 15 minutes across Brisbane’s southern bible belt, from Salisbury where there are probably as many churches as shops, past Hillsong’s base in Mt Gravatt to Mansfield, Brisbane’s infamous religious heartland and the home of Violent Soho, it strikes that in over 10 years in Australia, I don’t think I’ve ever been to a proper suburban gig. I’ve been to shows in Paddington and West End but never anything as far from the heart of the city as Mansfield.

I’ve heard that shows at suburban pubs were a lot more common back in the 1980s and 1990s, before noise complaints from residential encroachments and the replacement of band rooms with the far more profitable pokies, took hold. The establishment of a dedicated entertainment precinct in Brisbane probably hasn’t helped, with the music scene now suffering from the success of transitioning into a few square blocks of an inner city area, as the clubs and bars have slowly taken hold to the detriment of the city’s live music scene.

The Mansfield Tavern is exactly what you expect from an Australian suburban pub. Nothing like them really exists in the UK but imagine an out of town pub in the same way you’d imagine an out of town shopping development and you’d have a good idea. A large car park in the middle of the site has a large bottle shop (off licence) on one side, the pub on the other side. Even by 8pm the car park is full and feeling a lot like Heavy Metal Parking Lot as people congregate by their cars with their mates before the show.

The band room itself is like a large cattleshed with air con. By the time the main support act, Ceres, play its packed. I’m not sure of the capacity but it must be in the 800 to 1,000 range. It’s puzzling that Soho have decided to play a national tour that includes some reasonably small venues considering the year they’ve had, especially given the impact they made at Splendour In The Grass back in July. Their last tour included three sold out nights at the 1,500 capacity Hi-Fi in Brisbane so the downsizing (at least in Brisabne) is curious even though it involves playing in their home suburb.

The success that the band has had is evident in that, by observation, they’ve reached the enviable and extremely rare status of being a band where it’s acceptable to wear one of their t shirts to their shows. Outside of a few bit metal bands and Pop Will Eat Itself, it’s an unwritten law that Soho have overcome. The room is packed with an array of Soho shirts from down the years, while the merch stand is doing a roaring trade on the most recent designs.

The downside of breaking out and achieving a crossover audience is that you can’t pick who likes you. Between acts it’s a case of make your own entertainment, with random sing-a-longs interspersed with far too many “Aussie Aussie Aussie Oi Oi Oi” chants, in the way that only Australians can bring nationalism to a night out at a pub seeing a band. The high levels of testosterone towards the front of the room manifests itself in the dudebros shaking out their beer cans over everyone before throwing the empties towards the stage and shirtless crowd surfers during the set. Even before Soho start, a dude manages to run onto the stage and attempts to stage dive a distance that includes clearing the foldback speakers as well as the photo pit but just manages to face plant it into the back of the barrier. Luckily he manages to miss a photographer and a couple of security people in the pit, but it looks like a near miss and no less painful for him.

One final entire room sing-a-long is provided with ‘Killing In The Name” before the band takes to the stage, bassist Luke Henery, first out as ever, Luke Boerdam , wearing that same Mudhoney t-shirt I’m convinced he wears at almost every show, and they launch straight into ‘Dope Calypso’.

As someone who’s only see the band play festival sets during 2014, it’s a similar setlist to those big shows and one that concentrates almost exclusively on the Hungry Ghost album and the standalone singles that came out between the second and third albums, with not much from the band’s formative years. Nine of the album’s 11 songs are included, with only the title track and ‘Liars’ absent.

‘Lowbrow’, ‘Gold Coast’ and ‘Neighbour Neighbour’ follow in quick succession, the band barely pausing between songs but it’s ’In The Aisle’ that provides the highlight of the first half of the set. Guitarist James Tidswell spitting out the “Waiting for God, Waiting for God” refrain in perfect unison with the crowd, while Luke Boerdam really howls out the verses, Luke Henery, always the visual focal point of the band, pulling out all of his best rock moves, drummer Michael Richards, as ever with his face obscured by his hair, thrashing across his drum kit.

The crowd are at the heart of this show; screaming out every word along with Boredom. ‘Saramona Says’ has the circle pit bros hugging each other as they yell “Let’s start a fire” at the top of their lungs and the slower-paced ‘Fur Eyes’ doesn’t bring much in the way of respite, even though there are couples trying to slow dance to it.

Waves after wave of crowd surfers keeps security busy in front of the band. With their attention taken up with what’s coming at them from the other side of the barrier, they miss another stage diver during ‘Tinderbox’ who’s brought a potted plant with him for the ride. Unlike the guy who failed miserably in his attempt to clear the barrier before the band started, this one has enough velocity to virtually Fosbury flop over everything and into the crowd. The good job and thankless task that security are doing is acknowledged by Tidswell a couple of songs before the end of the night.

Every show has its mid-set lull; sometimes it’s a slower song, sometimes an obscure B-side or a new track that no one knows. What’s really surprising is that tonight’s mid-song lull takes place during ‘Muscle Junkie’, a song from Soho’s first album and one that’s been a mainstay of their sets for years. It gets a muted response from the audience when Luke Henery starts up the intro bass riff and the reaction never really gets above a small rumble of appreciation. By comparison they follow it up with ‘Covered In Chrome’, the one song above all else that everyone wants to hear tonight, with the shirtless bros crowd surfing en masse as the rest of the room sings every word as loud as they can and turns it into one big mosh pit. I got into an argument on the Collapse Board contributors’ forum describing Soho as ‘Big dumb rock’ even though it was meant as a compliment. How can any song whose chorus is “YEAH” x 15 and which includes the refrain “HELL. FUCK.YEAH”, three words that have more or less become the festival chant of 2014 be anything else than good ol’ Big Dumb Rock in all its glory?

The printed setlists gaffa taped to the stage list ‘OK Cathedral’ as the final song of the night, one of Hungry Ghost’s more subtle songs, less Big Dumb Rock than it is more interesting shoegaze guitar textures. However, the way it’s played live, extended into a guitar battle between Boerdam and Tidswell, manages to combine both of these aspects and turn it into a stadium-sized anthem. It’s not printed on the setlist but how could they play in Mansfield and ignore not just one of their finest moments but a song that they probably wouldn’t have written if they hadn’t have lived here. So the night ends with an encore of ‘Jesus Stole My Girlfriend’, the perfect finale, the not just the sound of the suburbs but this particular suburb.

When it comes to Violent Soho, in my mind, the greatest philosophical question has always been why has it taken so long for Australia to pay attention to them. They always felt like one of Brisbane’s great undiscovered musical secrets and have always been one of the most loved bands within the city’s music scene even though no one else really seemed to be paying attention until the last year or two.

I’ve photographed them loads over the years.  The first time was when they were the second band on the indoor second stage at Market Day. I had some photos published by Mess+Noise to go with an interview with them back when Mess+Noise was still a printed magazine, and have photographed them at various support slots, headline shows and festivals since 2006. (Annoyingly they’ve obviously changed the Flickr URLs so none of those photos come across to the posts now, although they’re all on Flickr)

I think I put it best when I wrote in June 2009, almost five and a half years ago:

“By right Violent Soho should be the ones with the number one records, with the Rolling Stone features, the extended interviews on Video Hits, on constant rotation on Triple J, playing the sell-out shows at huge venues, being lined up for the ARIAs. But the people of Australia have spoken. And they want Eskimo Joe. At least they do this year”

It’s not like you can say Violent Soho are better than ever, they’ve always been this good, it’s just that everyone finally realised this. They’re no longer Brisbane’s best kept musical secret.