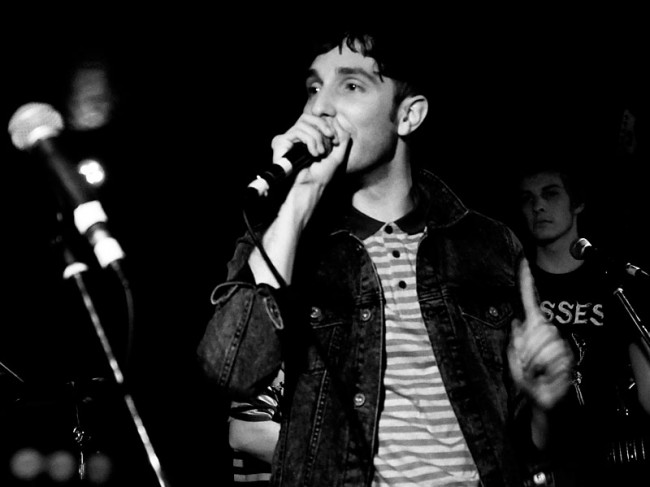 The first rule of writing about Velociraptor is that you have reference how many people play in Velociraptor.  The second rule of writing about Velocirpator is that when it comes to live reviews you have to mention what ‘mode’ Velociraptor are playing in for that particular show (i.e. how many of them are in the country and were available to turn up on the night).   While the band has operated with 12 members for years (rendering the first rule obsolete), recent times have seen the available numbers depleted thanks to the lure of overseas adventures and members just going AWOL (at least according to their recent press release).  With Shane Parsons and Simon Ridley often unavailable due to their commitments with their other band, DZ Deathrays (currently touring the UK), Velociraptor suddenly found themselves in a precarious position where they might have just looked like any other band on a stage.  The only thing for Velociraptor to do was to recruit a couple more people to swell the ranks and bring their numbers back to something approaching normality, at least for them.

Although word counts are often squandered for no good reason thanks to those two rules on writing about Velociraptor, there’s rarely any challenge as to what a 12 piece garage band actually achieves and for a long time it’s been their greatest weakness.  Any band that can put eight guitarists on stage should sound massive, except they never do, usually everyone their amps turned down real low, so low that at least half of them might as well just be miming.  For a long time there’s also been the question of when charming ramshackleness  crosses the line into general sloppiness.  Instead of getting better there was a period when every time I saw the band they seemed to have regressed and taken a step backwards.

But tonight is different and shows the band at their very best.  I don’t think in all the times I’ve seen Velocirpator, ever since that first time when they played downstairs at the Waiting Room all the way back at the start of 2010, that they’ve been this thrilling.  The recruitment of George Browning (Teen Sensations/Sulphur Lights) and Yuri Johnston (Keep On Dancin’s) proves to be a complete masterstroke as the change in drummer and bassist has added an instant rock solid foundation for the rest of the band to play on top of.  There’s no doubt that the band are completely reinvigorated by the changes in personnel.  There’s still no sign of keyboards anywhere in the mix but the guitars and the vocal army, Julien James, Rohan Dodd and the back-from-Europe, Joshua Byrd gathered around one microphone, the rest of the band set up similarly on the other side of the stage, sound more powerful than they’ve ever been.

Kicking off with ‘Riot’, Jeremey Neale’s assertion that “I heard you joke it was a riot and everyone was on the floor” is prophetic as the band are greeted with an instant mosh that lasts for the whole duration of the set.  The front rows crammed against the stage are sent sprawling and it’s not long before a continual procession of crowd surfers take their positions above the crowd.  The floor bounces to a level that’s totally disconcerting and makes you seriously consider the structural integrity of the building.  Given Black Bear Lodge is more accustomed to quiet acoustic nights, it’s probably been a while since the venue was put through this sort of punishment.  When was the last time Violent Soho or DZ Deathrays played here?

The band fire off pop gem after pop gem in relentless fashion. ‘Riot’ is followed by ‘Suzanne’, ‘Oh Yeah’ and Sleep With The Fishes’, some of the oldest songs in Velocirpator’s repertoire but there’s a freshness and an immediacy about the songs, they sound more urgent than ever. Velocirpator have always been a party band but tonight they become the party band.  World Warrior EP songs ‘Mystery Man’, ‘Jnr Astronauts’, ‘Scientists’  and ‘Cynthia’ bring the setlist more up to date before new song and the single that they’re launching tonight, ‘Ramona’ ends the night.  On first listen the Arctic Monkeys aping ‘Ramona’ disappointed although unlike everything else the band has written, it turned out to be a ‘a grower’.  Played live it loses the shackles of the stilted studio version and becomes another infectious hit for Velociraptor’s ever increasing canon.

Those gigs that you stagger out of, weak-kneed, ­­sweat-drenched, ears-ringing, gasping for the fresh air of the cool night?  Well, they’re the best gigs, aren’t they?