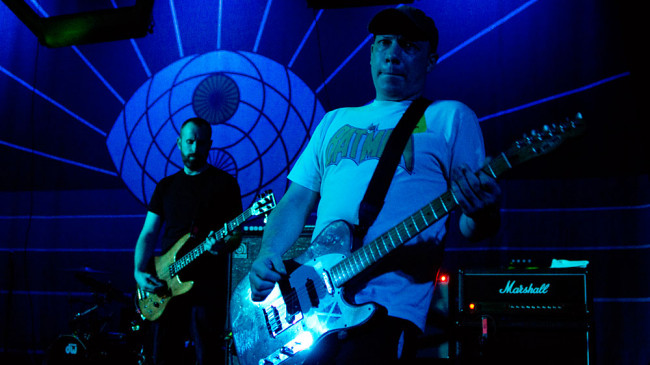 “This song’s called ‘Sister’, it’s for Gillian Triggs, for standing up to the bully boys.” Mick Turner throws up a long arm with devil horns at the end and smiles slightly.

“Yeah, Bookshelves Brandis,” he muses. “What a turd.”

He brushes his guitar strings into a gently insistent melody around which the drums flutter then coalesce, looping and gathering momentum and volume until it’s almost anthemic. I’m carried back a couple of hours, to when someone I was interviewing got talking about the shit she’s faced as a woman in the music business and ended up having so much to say it seemed almost to surprise her as well as me. Bits of her stories revisit me, made epic by the soundtrack. Eventually, the heavy strum winds down and the room comes back into focus as the music dissipates.

Turner’s music often drifts, beautifully, but this set is unusually driving and loud. Partly it could be the presence of a drummer, Joe Alexander (of Terrible Truths and director of Bedroom Suck Records), who acquits himself ably in the seat warmed at various times by Jim White (Dirty Three) and Jeff Wegener (Laughing Clowns). He seems more on the beat, or ahead of it, than those guys. The crowd’s bigger and far more attentive than it was for Mick’s solo Cat Power support on the same stage a couple of years earlier. But ‘Sister’ is the only song that gets a name or a dedication. Even ‘Deep Waters’ from the Dirty Three’s Don’t Look Back-approved classic Ocean Songs (1998) simply rolls out, unannounced and understated, recognised by a few but appreciated by many. It’s the opposite of Warren Ellis’s famed approach to song introductions. Regardless, this is an entrancing set from a unique musical combo.

Like Ellis with his banter, Mogwai both recognise and skewer the cinematic grandiosity of their instrumental music with their titles: Hardcore Will Never Die But You Will; The Hawk Is Howling; ‘You’re Lionel Richie’. It’s equivalent to throwing up a pair of devil horns, kind of silly and kind of knowing it but all the more sincere for that. Not that the titles are present tonight. Guitarist Stuart Braithwaite, who takes the frontman role, acknowledges a hero’s welcome with many polite thank-yous and grins but doesn’t introduce even the impeccably-titled “I’m Jim Morrison, I’m Dead”. We just get the music. And it’s funny, while you’d think that means the music could be about anything, it’s not. That is, it’s not about anything, at least for me, tonight. My ‘Sister’ flashback is the only time the soundtrack gets a film to go with it. But it wouldn’t feel right to call this abstract. Mark Rothko said his paintings aren’t representations of experiences, they’re experiences in themselves, and that applies to Mogwai too. Movies aren’t really the right comparison, their songs are more like rides. As with dance music, it’s less what it means than what it does.

This set feeds that dance music comparison, focusing on pulse and repetition with an emphasis on the last two albums, Hardcore… (2011) and Rave Tapes (2014). The latter strips back the former’s distorted riffs for a skeleton of synth and pounding drums, in modular constructions that become muscular in the live setting. For ‘Deesh’, the band members huddle in and take up extra drumsticks, while the Kraftwerkian ‘Remurdered’ is all about the massive bass that kicks in halfway through. Mogwai live is a physical experience. Some young, drunk dudes near me have their arms in the air and around each other.

There’s new song ‘Teenage Exorcists’ with Stuart singing (a bit like Placebo, no diss from me) and keyboardist Barry Burns sings unintelligibly through the vocoder a couple of times, notably on the melodic ‘Hunted By A Freak’. He also does Gruff Rhys’s part in ‘2 Rights Make 1 Wrong’, a curio from Rock Action (2001) that takes on new life by pumping up and extending the stuttering electronic beats in the second half, a welcome bit of syncopation as a respite from everything else in the set being so on-the-grid. Ancient ‘Ithica 27 ø 9‘ is a glimpse of the meandering Mogwai that helped define the guitar end of 90s post-rock, but there are no showings from the delicate Come On Die Young (1999). We get epic piano (‘Autorock’) and nods to metal (‘Batcat’), both highlights. But the moment everyone seems to want comes during ‘Mogwai Fear Satan’, when everything settles down to a hush then, predictably but so enjoyably, explodes. The young dudes grab each other by the shoulders with howling mouths and, a few metres in front of me, the silhouette of a hand thrusts up through the blinding lights and makes the devil horns.