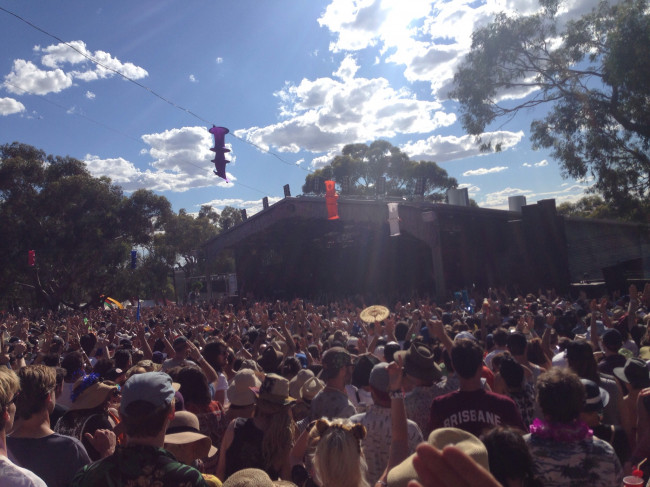 We’re through the looking glass – on the good side.  Day Two is buffered at both ends, forming a temporary autonomous zone whose participants abandon property (I wake tumbling from my neighbours’ tent, raising no questions but only smiles on both sides) and identity (everyone else knew to dress up).  Though there’s still only one stage, things are less linear.

Strains of the City of Ballarat Municipal Brass Band float on the breeze from the Ampitheatre, an appropriately vague anthem.  Things get gently underway.  Tiny Ruins swell and sigh magically, mallet drums and soft bass under fleshy acoustic and a lead guitarist sitting up in the high register like old Ronald from the Flaming Lips in a tunnel.  Particularly with Hollie Fullbrook’s dusky voice, they’re reminiscent of Brisbane’s McKisko, hovering on the spooky edge of the melancholic shadows but still welcome in the morning sun.  It might be at around this point that the DJ spins ‘Who Knows Where the Time Goes’ by Fairport Convention and I feel I must highlight the excellent interstitial music over the whole weekend.

Mia Dyson brings the grit, the dukkah on your eggs (very popular here), the morning cigarette, and while her bar band music is a little too stock anthemic for me, it draws the punters to their feet and ends with an early smattering of shoes in the air.  A little later, the good ol’ boys and gals of Phosphorescent take us to a shadier, quieter part of the same barroom.  As has been noted, it’s a room hung with well-worn cliches, but there’s a little sparkle and blur to this pre-afternoon nap music.  I miss the end of Phosphorescent due to said nap, but I’m told they get a bunch of shoes too.

A little earlier, up the hill under the famous Arch of Love (dressed in cheetah print this year), a fancy dress wedding conducted by a kimono-clad celebrant draws cheers.  Dancing around a bit later (Eno’s ‘Needle in the Camel’s Eye’ another wonderful choice to be blasted between sets), I pass a group of topless women painted with “Free the Nipple”.  Many of the costumes around the place are under-sea themed – jellyfish, other fish, blue things – and all of them congregate mid-afternoon at the Deep Sea Doof in under the red tent just out of the arena.  A large bucket of Campari is swished around generously and some sort of fashion parade/dance-off seems to carry on well after we’ve returned to the main stage.  Apparently Cloud Nothings were good too.  The Public Opinion Afro Orchestra certainly are, and their mass dance-inducing set can take a lot of the credit for hyping the crowd for Ghostface Killah.

And hyped they are.  Ghostface’s set is definitely the most packed I see the Ampitheatre in the daylight.  The mood is joyous, joints are passed to strangers, heartfelt W hands are thrown.  In true style, the first half consists of the DJ spinning warm-up tunes, leaving the remaining 20 minutes for the Killah and his sideman to further hype the crowd, regularly request W’s in the air, and cram in a couple of choruses and a verse or two from a bunch of Wu-related hits: ‘Ice Cream’,  ‘C.R.E.A.M.’, even ‘Shimmy Shimmy Ya’ and, as you may have heard by now, ‘Protect Ya Neck’.  We’re subjected to a potentially vibe crushing five minute version of the X Factor as a series of folk volunteer at Ghosty’s request to perform Meth and ODB’s verses and are rejected within seconds.  But then the winners emerge victorious, with the crowd behind them like modern Courtney Coxs:

Today’s sunset slot is taken by Augie March, old favourites who seem born to this Victorian countryside but who, like most people I know, went off a few too-smooth albums ago.  Turns out they’re great.  Opener ‘Definitive History’ is devastating. The gently breathing music is haunting in the sense of something you can’t escape and it’s one of too few recent songs heavy enough to begin to face the ravaged Australian psyche: “One for the mother/one for the dad/one for the Treasurer/one for the plasma screen/don’t forget the developer’s dream”, goes the chorus, set between verses of violence and proud ignorance.  Our Day Two paradise is rudely contrasted with the world outside.  Thankfully, from there, we’re cradled by some older, unfairly forgotten classics – ‘Here Comes the Night’, ‘There Is No Such Place’ – reminding me more than anything of the rumour that singer Glenn Richards is or was a florist, creating little bundles of beauty to grab onto.  Closer ‘This Train Will Be Taking No Passengers’ is another trip to the dreaded outside world, but it’s also ripping knees up.

Up at the lookout, the sunset itself is one of the most popular draws and for good reason:

Speaking of ripping knees-ups, Ty Segall isn’t half bad at them.  For a so-called wunderkind touring a critic’s-choice album, he’s disarmingly friendly and clearly enjoying himself.  Manipulator is shinier than past work, mixing his North American garage yoof style with Bowie/Bolan/Brett embellishments, right down to the strings and double LP.  But live, the songs are ragged and minimal, becoming recognisable just in time for the band to crash into the next one. It’s all great fun and good vibes, more joints are passed, requests are shouted and acknowledged, and it’s over in a flash.

“The Skatalites – are you kidding me?”, asks Ty before he finishes.  “No”, answers the literally stage-filling band/collective legend with a brassy honk.  Wikipedia had told me there are no “original” members left, but there are certainly some people of distinguished age in the group, including a charming female singer who winks through ‘My Boy Lollipop’.  They play ‘Guns of Navarone’ – they HAD to, right? – and it’s the heaven I knew it would be, but when they start up Roland Alphonso’s ‘Phoenix City’ I lose my shit.  Thanks Meredith.

“De La Soul – are you kidding me?”, asked Ty a couple of hours back.  “No”, they answer eventually, but it’s getting late isn’t it?  I’m a bit distracted.  Back up the hill.  Good people.  Eating loads of chips.  They play ‘Ring Ring’, they play ‘Me Myself and I’, they play the timeless ‘Roller Skating Jam Named Saturdays’, they don’t play ‘Eye Know’.  Unfairly, I’m cut about that.  Time for bed.

Half the crowd doesn’t seem to bother with the main stage on Sunday, but there’s a peaceful vibe despite the looming drive home and I couldn’t think of a better way to spend it.  Master Song’s Tai Chi class goes for 40 minutes and teaches us the ‘Lotus’ routine and a several-second kung fu bit.  I have a few lie downs as we go.   Krakatau play prog, not the ubiquitous fuzz rock or psychedelic freak-outs but actual keyboard noodling, fancy chord, jazz drummer, sax guy, fat bass prog.  Goes well with gozleme.  Jen Cloher has Courtney Barnett in her unassuming band and her songs warrant further investigation.  Goes well with a Bloody Mary.  Marlon Williams is a Kiwi troubadour with a sweet croon and he comes out with this quote-of-the-day: “I’m gonna play a Leonard Cohen song.  If you think it’s ‘Hallelujah’ and you’re worried, don’t be, it’s not.  If you think it’s ‘Hallelujah’ and you’re not worried, please leave”. It’s all in his polite tones.

We pack the tent.  We have a Pink Flamingo, an amazing pink fizzy gin drink, at the Pink Flamingo Bar.  It’s a grand tent, like being in a zeppelin with a dirt floor – were they full at night, I wonder?

The Lemonheads are The Lemonheads.  Just great.  Evan does the first few tunes by himself, starting with ‘The Outdoor Type’ (der) and summoning Courtney Barnett again for the beautiful ‘Being Around’.  The band itself is perfect hangover music, blasting the cobwebs out tenderly.  ‘Tenderfoot’ (that makes two Smudge songs?) is amazing and by the time they play a rollicking ‘If I Could Talk I’d Tell You’, I realise now’s my chance to get that shoe up.

The Meredith Gift – the nude lap of the oval and the day’s climax – is more of an organised affair than I expected.  Many would-be Grecian athletes are turned away before the opening parade, multiple heats and final.  Shit they’re fast.  One finisher makes a public marriage proposal which seems to be accepted and gets a few shoes.  The mood is such that this is no great surprise.  It’s a bit of a shock to walk straight out of this and onto the highway, but we do.