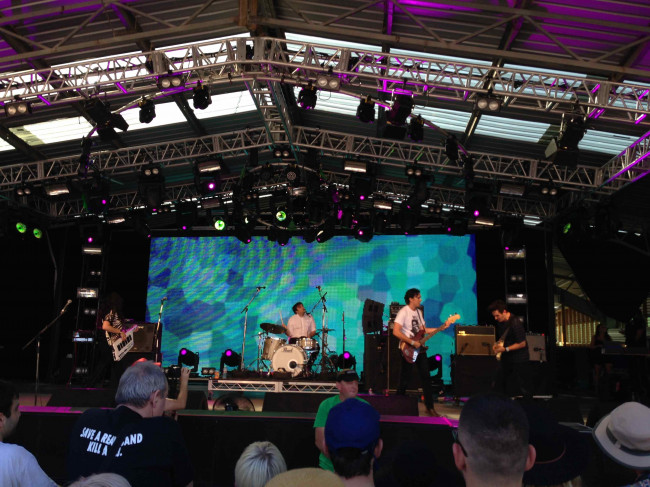 It’s immediately apparent that it’s true: Meredith is NICE.  Even the put-upon town of Meredith, ten minutes from the festival grounds, is welcoming, the lovely pub dishing up “festival lunches” and handles of beer opposite the corner store selling bags of ice and ammunition.  The staff/volunteers at the festival gate manage to make a vehicle check for glass, the only real contraband here, feel like a high five.  Somehow there’s no queue.  We drive up to a ridge and gaze out.  Spread out below and around us are thousands of tents, leaving one high-set grassy patch with a clear view to the line of wind turbines on the western horizon and a short, but not too short, walk to the loos.  The neighbours lend us a hammer. Later I will sleep with them.

At the Supernatural Ampitheatre, home to Meredith’s main and only stage, people have arranged their couches in long rows across the grassy slope facing a countdown screen with about ten minutes to go.  We drop our sheet and eskies in an open space between the couches and stage and quickly realise why it’s an open space:  by the time the count’s reached zero, we’re half sunburnt, lugging eskies full of water back up the hill.  Chasing the generous shade of the pines and gums in the ampitheatre will become a pastime over the next few days.  Still, some keen punters pounce immediately on the space we’ve left.

The Hard Ons come on like the blinding afternoon sun, the tang of the dust and the first, bitter beer.  There are a few songs with former singer/drummer Keish de Silva out front before they cut down to what I take to be the more recent three-piece.  They seem to veer toward the metallic, hard rock end of their spectrum, at least until the final songs, or maybe I’m not tuned in right – it’s clear that what’s considered melodic and “pop” has changed shockingly in the last 30 years.  A far cry from the inoffensive stuff that opens many festivals, and maybe that’s the point.

It’s turns out to be pretty easy to move in and out between bands and of course we’re down the front for Blank Realm, among the biggest collection of friends and acquaintances I’ll see all weekend.  People from the southern cities are buzzing after their Blurst of Times festival performances a few months back and with good reason: the band is on form.  In fact, it’s near the best I’ve seen them.  Playing a good thirty-something shows in a year can do that.  Filling the big stage, beset by psychedelic cartoon emus, they thrash through ‘Acting Strange’, lurch into an accelerating ‘Cleaning Up My Mess’ (both from 2011’s Go Easy) and set the air chiming with ‘Bulldozer Love’ from 2014 album-of-the-year contender Grassed Inn.  Guitar wizard Dubbzy has passed amazing and become scary, finding the notes in between the melodies, sweating and hammering away at the cracks until whole songs split open.  Sarah straps on her keytar and steps in to face bassist Luke (who is sufficiently snake-hipped to be complimented on his moves some nine hours later by an appreciative punter) – they’ve reached stadium level.  Dan steps out from the drums for now-classic ‘Go Easy’, playing the cool breeze card at the perfect point in the set.  By ‘Falling Down The Stairs’, the crowd is full and fully onside, even singing along.  I’m surprised to see no shoes in the air, but I’m told it’s early.

And then it’s back up the hill, laid out on the grass.  Teeth and Tongue come on cool, all sunglasses and matching jackets and washes of synth, but it’s a bit “festival band” for me – soft walls of sound, fuzzy blocks of shade and colour, and I miss the lighter touch I imagine I remember from an earlier sound.  I kick back and get talking to a hippy whose name changes every time someone greets him.  We head up to the lookout for some late sun rays.

There’s no wall of sound in Mark Lanegan‘s set – it’s just him and a guitarist – although this might be the first time I’ve seen a hand signal for “compression” (sort of like exaggerated mudpie-making).  From here that seems a boring tidbit, but that’s the thing: Lanegan is a compelling guy, conservative in his movements and speech, and you can find yourself hanging off them like much of this crowd.  I have moments of thinking it’s presumptuous to present just a voice and guitar to thousands of people, but as the low sun trickles through gum leaves, that voice – parts Faithfull, Cohen, Waits – hits the spot.  There are some delighted faces in the dappled light.

We wander back to the tent for warm clothes and supplies.  Everything turns orange, then blue.

In cartoons, when someone puts a freshly baked pie on a windowsill, the aroma oozes out, spirals through the air, forms into a finger that taps you on the shoulder and grabs you by the nostrils.  That’s what Sleep‘s twin guitar sound does; it oozes, spirals and smells all the way up the dirt track to my tent.  It’s physical.  ‘Back in the Sup’ is perfect for sitting dopily, nodding, eating snacks.  The majesty is undercut a little by the everydayness of the dudes and their banter.  That’s a good thing and, I’m realising, a Meredith thing.

The War On Drugs seem to take forever to take the stage.  The crowd seems to reach its full 10,000 and most of them seem to be on the few-metres-square plateau of grass right in front of us.  They’ve all just reached peak chattiness.  Basically, this is the point at the festival where I get the shits.  So it’s hard to know how much of the swampiness in the band’s sound (dreamy on record, albeit sometimes sickly so) is due to a dark fog in my own head.  They do feel slow, even after Sleep.  But it gets dark and lights start to twinkle and the crowd gets happy when they play the hits – ‘Red Eyes’ is the festival choon everyone’s been waiting for.  By Sunday, a few people are putting them in their list of highlights.

The Bombay Royale are the sharp, colourful pick-me-up I need.  The vintage-Bollywood inspired band embrace theatre with their costumes, flamboyant frontman and crowd surfing elephant, but man, the PIPES on their female singer, Parvyn Kaur Singh.  Their own compositions are suitably fruity for this fruity hour – how else to bridge the somnolent rockers and the dance acts? – but a cover of ‘Jaan Pehechan Ho’ (introduced to many by Ghost World) is a completely unexpected treat.

An aside: it’s at about this point that we reach peak totem.  It turns out it’s a Meredith thing to carry a pole, bearing decorations and icons and strung with lights, to help your friends find you and to add to the carnival atmosphere.  A double-sized George Costanza head is an early highlight, although I’m not quite ready for the bloke carrying it to show me his own mug on the other side.  The lit up garden rake brings good vibes, as do the Japanese lanterns on bamboo and the orb of fairy lights.  This is just as well, because the furry monkey humping away triumphantly astride the floppy neck of an inflatable flamingo is troubling, to say the least.

All of these, however, are blown away by the blinding floodlights Jagwar Ma have somehow managed to organise.  Jagwar Ma: who knew?  (Incidentally, that is the one usable sentence I will later find among the weekend’s handful of voice memos.)  The NME, apparently.  But the overwhelming sentiment on the night is delighted surprise, as these Sydney lads in bucket hats justify their international rep with a brash, playful and perfectly-timed festival set.  Most welcome are the dives below the sunny lightness of last decade’s “indie dance” for some deeper fun, warping their songs into promising new shapes.

Factory Floor have ditched the guitar and drums altogether, though their heavily treated samples still flicker like ghosts around the industrial electronic mix.  Which is interesting, since for this Australian tour at least they’ve also reduced to two members, “the guitarist” (Nik Colk Void) and “the drummer” (Gabe Guernsey).  Live, the songs are reproduced from near scratch through samples, boiled down drum machine patterns and brutalist Roland basslines, then stretched until they melt into each other, ending up in a strange place between monochromatic and psychedelic.  Last week’s performance at an “Up Late” session in Brisbane’s GOMA suffered the inhibitions of the too-well-lit crowd.  The festival set, of course, is a different affair, but there are as many audience members hypnotised as there are energised.

James Holden, my can’t miss – the original justification for my interstate travel – journeys even further from the bangerz some might be after at this point.  Which is unsurprising, given his recent focus on (amazing) album music with 2013’s The Inheritors.  That pagan-themed suite of roiling analogue synth, building to occasionally ecstatic drumming but just as often drifting contemplation, probably couldn’t find a more apt venue than Meredith’s starlit Supernatural Ampitheatre.  The megalithic animations are wonderful, the live drummer is welcome and the music sounds more expansive than ever.  The trick is the time slot.  The party heads want to party, the sleepy heads want to sleep, and I’ve got half of each type of head.  The set is entrancing, sometimes awesome and deeply affecting, and later I will wish I could say I had given it better attention.  (Later still, though, I will find a short voice memo in which I can be heard responding to soaring highlight ‘Renata’ by citing, serious-voiced, some misremembered lyrics from the Foo Fighters’ ‘Big Me’, suggesting a deep understanding that hindsight cannot encompass.)  Right now, though, it’s time for bed.  More tomorrow.