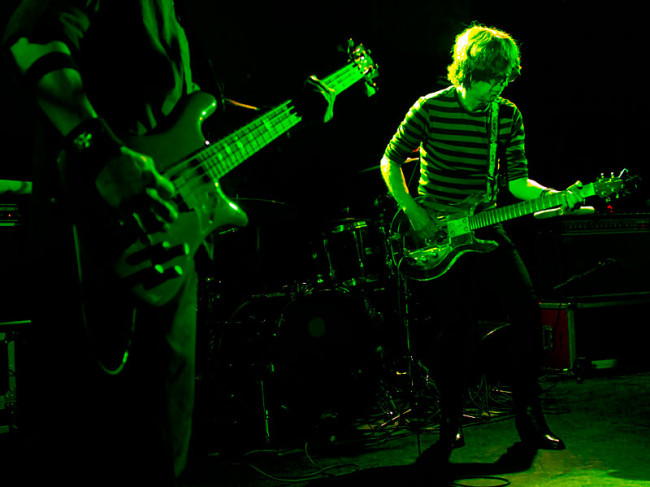 I didn’t stick around for Hoodoo Gurus, not having grown up in Australia during the 80s.

There was a great wodge of sludgy 70s metal playing in between them and the band I’d come to see (The Flamin’ Groovies). I am fond of what I’ve heard, though.

This is prime early 80s pop. My perspective here, hearing it for the first time in a long time, is that I can’t help but be reminded of prime Adam And The Ants – the drum sound, the guitar sound, the intonation on the vocals, the “hur-rum”, the nods in the direction of tribalism … but I don’t see this is a minus. I know nothing about early Hoodoo Gurus. It’s very possible Adam heard them rather than the other way round, or there was some beautiful synchronicity going on between the two sides of the Earth (Perth, Western Australia and London). I dig their rockabilly look (very Meteors) which is also simultaneously a fraction New Romantic. I can hear faint echoes of New York (Tom Tom Club, ESG): again, this is looking back through a 30-year prism, and probably more a reflection on the sound of the times than a reflection of what was going down back then. I bet they were a blast to see live. (Song of the day 292: Le Hoodoo Gurus)

I didn’t stick around long during Blue Oyster Cult’s set either. Just long enough to confirm there are great sprawling chunks of 70s rock that I don’t understand and never want to. I’m a Flamin’ Groovies man through and through. If you were there last Thursday at the Tivoli you might have spotted me: I was the one screaming “Flamin’ fuckin’ Groovies” every few songs and dancing lopsidedly next to the fellow clutching a beer and dancing lopsidedly.

The one-liner for the barricades runs thus:

I ensured I was there on time for The Flamin’ Groovies’ first show in 320 years (with the  Jordan/Wilson/Alexander line-up: this means nothing to you dunderhead, I know – but speaking as someone who once saw The Flying Burrito Brothers at the Corner Hotel, Melbourne with NO ONE who’d been in the band before 1983 or something, trust me it matters). I ensured I was on time for this:

And this (one of the greatest sevens ever):

And they rocked like the remains of a teenage garage band they once were. They rocked like Girls In The Garage. Yes, that good. Sure, not all the set was golden. (The Flamin’ Groovies were always way to much in thrall to The Rolling Stones for that to be the case.) But when it was golden it sparkled like spring rain. And when it wasn’t, it was still a damn good time (speaking as a man who showed up determined to enjoy himself and determined to dance, and who did both).

In many respects – in most of the respects it mattered, actually – this was Marquee Moon, this was Slanted And Enchanted. Rock music honed down and refined and leading a new generation in fresh directions. Not that you’d know it by the crowd, many of whom made me look virile. No disrespect intended. The hipsters and Pavement acolytes were conspicuous by their absence. Dunderheads.

The revolution once started here.