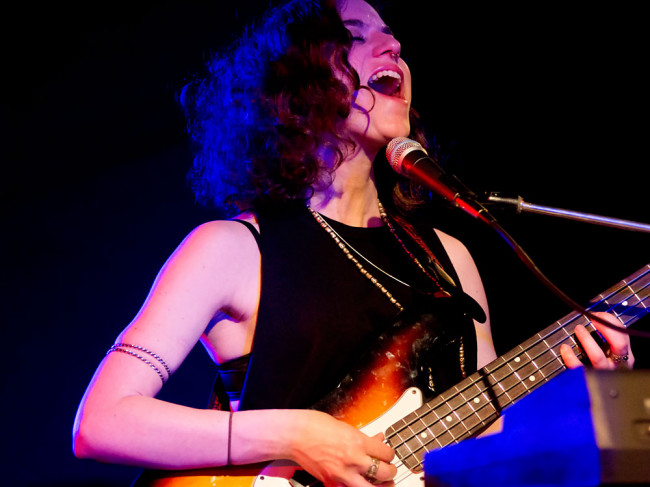 “There’s not much open on a Sunday night in Brisbane,” laments Angel Deradoorian. “We ended up eating in the food court in the mall.”

Our well-loved Chinatown is less than a block away and there’s a rash of bars copying the fried fare of her native California. But as any local who’s been asked for tourist advice knows, the best attractions are low-key and often missed – including by other locals. “This place is open!”, the singer exclaims to lazy cheers from the small but friendly crowd.

Opener Andrew Tuttle embodies this low-key, local charm, easing the gathered few into the evening like a verandah. But the layers of digitally treated banjo and guitar mount steadily up, so that walking into the set mid-flight is a bit like waking up on a plane and looking out the window at a white wall that only gradually reveals its subtleties. Making clouds is no small feat for the banjo, that most percussive of stringed noisemakers, but such is Tuttle’s organic union of man and machine.

Sunbeam Sound Machine expand the bedroom dream-pop of singer/guitarist Nick Sowersby into full band mode a la Tame Impala (though they probably tire of hearing that). The wash of chiming, verbed-out guitars carries some strong melodies, the most memorable being ‘Getting Young’ where the singer pines, ‘Take me back to 1994/Take me back to 1993…’.

Deradoorian adapt well to the quiet-Sunday-night mood. Eschewing any grand entrance, Angel and her one bandmate take up positions facing off over a small cluster of instruments, the latter handling stand-up drums and the former alternating between bass guitar, keyboards and various percussion, both contributing the almost-trademark vocal sound recognisable from Angel’s time in Dirty Projectors.

Perhaps it’s being able to see how its done, but this live performance seems leaner and more muscular than the album, The Expanding Flower Planet. Most songs begin with Angel holding out a microphone to capture a drum loop, then adding only one or two other elements – a striking bassline, curling synth tones or simply a shaker – over which the singers trade harmonies, melisma and shouts. It’s a powerful demonstration of space, rhythm and repetition. ‘A Beautiful Woman’ gets the biggest crowd response tonight, but it’s easy to imagine a fuller room getting carried away by these trance-like jams.