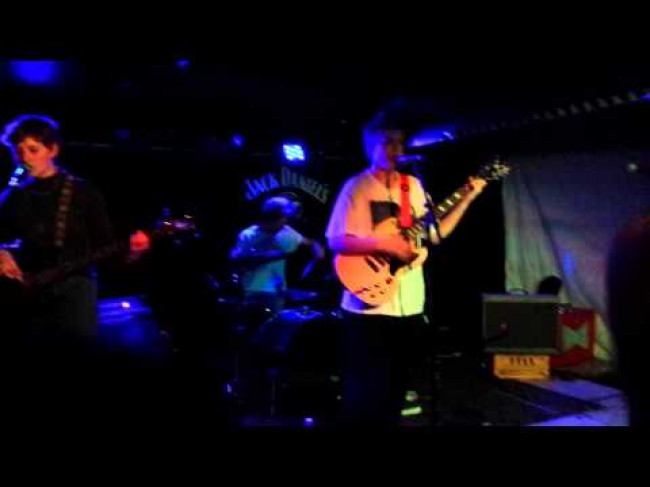 I watched 40 seconds of the greatest band.  I pretended I had watched 40 minutes when I spoke to them later because hell it’s embarrassing to have watched 40 seconds of the greatest band just as the “thank you’s” kick in and then enthuse to the band how wonderful you think they are and can they play a show with you in Worthing in November, please please please.  I asked the promoter too.  It is my new way of mating.  See 40 seconds of the greatest band and then turn on the 54-year-old charm.  Someone had whispered “Raincoats” downstairs and I scorned and they looked embarrassed too, because they were downstairs and so if it was true why were they there and if it was not true why were they saying it, and so I took the steps three at a bound only to discover 40 seconds of the greatest band, and not only was it both true and not true but it was wonderment, magic, sparky nervous magic.  Whispering as if it was an orchestra, and so special.  I am a git, frankly.  40 seconds I watched, and 40 minutes was there for the taking like a manifesto: the key to the newest treasure chest was in my hands and I failed to turn the lock until just so close to being so late.  WHAT ELSE HAVE I MISSED IN MY MANIA?

Read not my words.  Read my words and weep for my future.  Read not my words, and listen. Five or six of them on stage (I did not have time to count) and they were in the groove, lost in music.  Caught in trap.  More intimate than the sexual act (not that that is saying too much, really).  A call to hugs for the lost and flighty.  Ivor Cutler distilled through an alternative lens and alternative reality.  Marine Girls re-imagined by a generation that has their own beachcombers.  A cosmic love-bomb.  Psychedelic whispering.  I took all of this from 40 seconds, easy.  I have that ability.  So lonesome, so awkward.  So beautiful.  I relived the 40 seconds over and over in my head for weeks afterwards.  It feels like weeks since I last felt their touch.   (It is days.)  You will not understand.  You will understand.

This is yours, if you just stop talking and listen.

So great.  Every one of those 40 seconds.  So great.  I cannot believe this band is not being YELLED ABOUT FROM THE BARRICADES OF THE DOLDRUMS OF BRITAIN.  So great.  I am so glad I did not see the full 40 minutes because I would have been spellbound, star-bound and incapacitated for months to come, and would never have started my book company.  Imagine.  Music that lasts for 40 seconds where every single second is Mary Poppins magical.  So intimate.  Like reading.  Like floating on waves of tiredness and solitude.  I would willingly suffer an entire ‘nother lifetime of manic depression just to hear those 40 seconds again.  Is there ANYWHERE in  the mainstream U.K. that will allow me to write about Porridge Radio and let the beauty come flooding in?  Anyone?  I feel so impotent but this music helps magnify my sense of self, does not lessen it.

After that, I watched 40 minutes of Australia’s greatest band in my old local, and in places it felt like I was full-on hallucinating – images of Brisbane and kinship fleeing across my speckled gaze.  Two Valiums and four Coca-Colas and sweet sweet psych rock.  That is all it takes.  Which Verlaine do you prefer anyway?

Raincoats?  Man, no.  Having listened to more than 40 seconds now, I will be too much in awe to be able to speak to the lady if I ever should encounter her again.

Flying over Russia, her greatest song.