I have a crush on the violinist with Slum Of Legs, pt 2 | The Glug 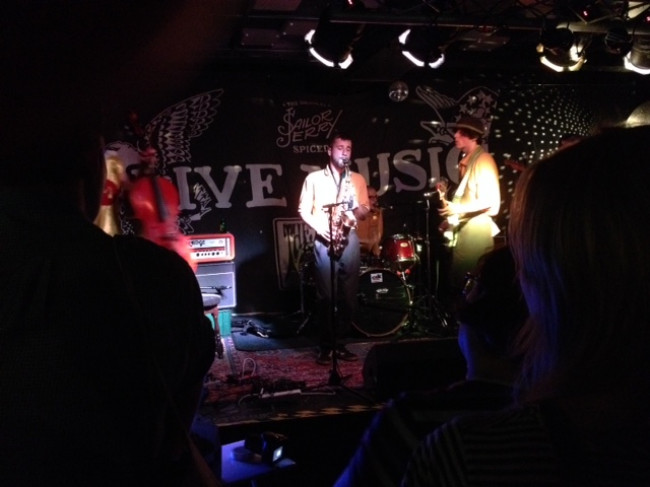 Only not so much so.

I swear it.  I was not dreaming.  I was idly watching the lady on the merch table smiling, engaging – and this gang of MEN wander on stage, dressed in orange, with an Orange amp.  Six or seven of them there were, and a clown that played double-bass while eating a burger.  Eight?  Maybe eight, and I was all prepared to walk out because they looked like student hipster wankers when the saxophonist started to blow… and the first number was like the above, only not so much so.  Jazzy no wave porn slowing down and speeding up as the fancy took them, and I was immediately hooked.  Blown.  Line and stinker.

It certainly was NOT this.

Blurt were only three, and these guys have a bloke in a bowler hat Clockwork ORANGE style occasionally picking up a trumpet and making weird noise… that makes, what?  Seven?  This sax-player, I swear though – he is the best sax-player I have seen in 33 years.  Not that I can remember the last 33 days you understand, let alone 33 years but… well, he knows how to blow up a fire and when to subside and Gerry mothercunting Rafferty or that MORON from Hazel O’Connor’s band he most certainly is not.

But between you and me and my other six readers I have never heard of the above band before now.  So I don’t hear it now, see?

Undeniable though – and I do not think it is just nostalgia for the days of Uncle Ted and Uncle Edmund talking – is the fact that six minutes in, and The Glug (fourth on the bill in a tiny pub in Brighton) are better than every band I saw in seven years in Brisbane, bar three.  (Sorry Brisbane.)  If this was 1981 you might call this loose wired jazzy punk music post-Pop Group but it is not 1981 and it is not post-Pop Group.  The clown takes another bite of cold burger.  My feet start to itch.

The Glug have two singers and a guitar and… FUCK THAT.  Watch the saxophonist blow.  Watch him.  Just watch him.

No links.  Until I checked a few minutes ago, I was not even aware the band had a bike.