I have a crush on the violinist with Slum Of Legs, pt 1 | The Wharves 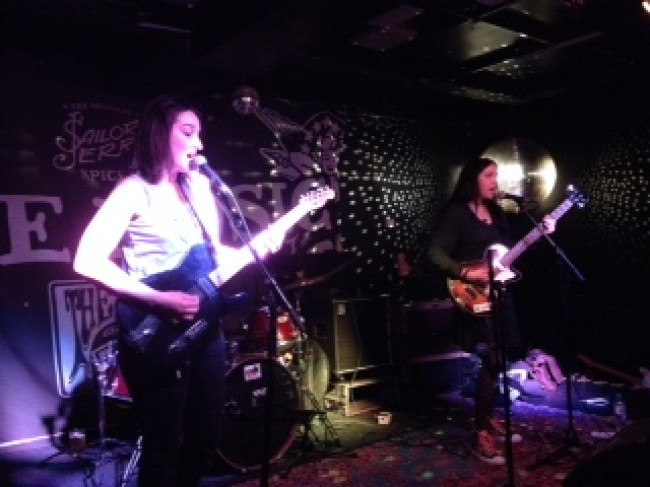 Sometimes it’s nice not to have to use your imagination.

This is my music.  Not just, of course.  There is a moment when I’m listening to the Wharves’ beautiful spellbound catlike three-part harmonies, entranced by the mirror ball rotating in the corner, noting the orange trainer laces, when I’m there.  Here.  Lost in music, caught in a trap.  The battle was won long ago.  Rock music has not been the province of males for years and years now – despite the efforts of mainstream music press to have you believe otherwise.  Perhaps magazines like Plan B and Collapse Board helped bring about that change, offered validation and assurance to those usually shunned by the spotlight.  If so, that’s something to be proud of.   That’s not my primary thought however: my primary thought is this.  Life is suddenly vivid again, boundless in its possibilities.  No turning back.  This is female music.  This is strange, rhythmical, wonderful, natural music.  And fun.

To borrow a line from Bourdieu: criticism validates.  Not only that but criticism validates and it validates the validator.  Two gigs in Brighton and I feel like I have value again, something I was grasping so vainly for, for so long, in Brisbane. It does not bother me the knowledge the feeling is transitory.  I know the same feeling that I felt down the front of Ramones shows in 1980, that if I were to die now everything would be fine.

Everything would be heaven.

Other bands play, and they are wonderful.  This is not important right now.  Nothing ever is, not when you’re lost in the moment.

I took my housewives’ choice – Valium Girls – the next morning anyway, mindful of the example of Daniel Johnston.  A small creature by name of Lauren came over and announced herself as a baby cat and crawled underneath her daddy cat’s protective cage.