‘Humanz’, Gorillaz: Subjectivity Is Not an Inherent Human Trait 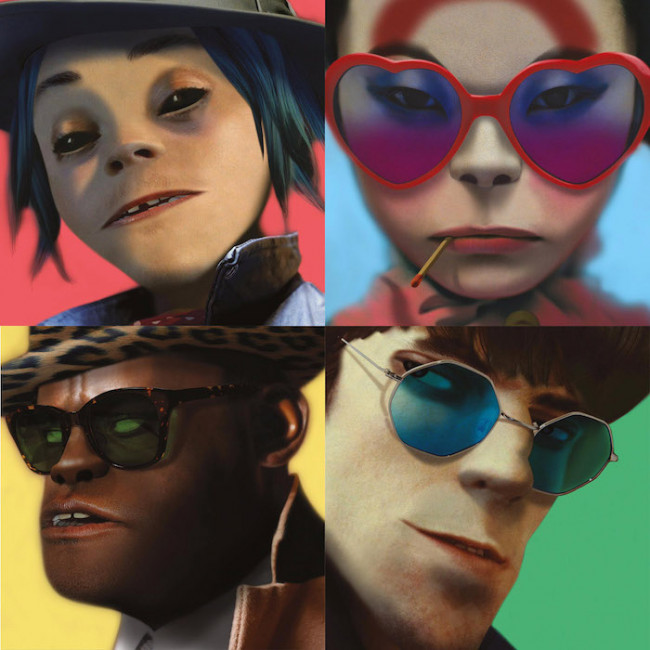 The most interesting thing about Gorillaz long awaited return isn’t the music (it’s inconsistent at best), it’s how the album is being delivered. Humanz is album that insists on both its own commercialism and its refusal of authorship.

After a 7-year hiatus we not only get a 26-track album with collaborators such as Jenny Beth, Grace Jones, De La Soul, D.R.A.M and others, but a Red Bull collaboration (yes, really), a 10-episode T.V. show, the Humanz House Party app (immersive VR spaces called ‘Spirit Houses’ where fans could listen to the album in advance), and the first ever live interview with virtual band members 2D and Murdoc. With Humanz, 2-D has become very 3-D.

A project of Damon Albarn and visual artist Jamie Hewlett, Gorillaz have always used the virtual avatars of Murdoc, Russel, 2-D and Noodle as a method for production; a conduit for Albarn’s commentaries on music production and technology, and as an experimentation of musical styles through dissonance. Albarn speaks of Gorillaz as “always the one place that I know I can do whatever I like – the blueprint is a drum-kit and a synthesiser”. This time, combining that blueprint with his virtual conduits has allowed a dissonance to emerge beyond style, pushing fast and loud towards something delicately weird.

Humanz is a political record that plays as an emotional response to recent events. It’s no coincidence that the first track to be released from the album, ‘Hallelujah Money’, arrived the day before Trump’s inauguration. Throughout the album, the emotional response surfaces as personal reproaches (‘Andromeda’, ‘She’s My Collar’), and as more overt communal empowerments (‘We Got the Power’). Strewn across the album are tracks ranging from 30 second interludes to (somewhat) more radio-friendly, 4-minute ‘Sex Murder Party[s]’. This is nothing short of carnivalesque. The composite arrangement of tracks appear as a transitional mode of narrative, open to multiple perspectives and variations, and almost-infinitely adaptable to situations, contexts and collaborators (it’s truly fantastic to see Jenny Beth of Savages occupy a sleeve with Grace Jones). Gorillaz has found its true voice: it’s fast, political, emotional, personal, and messy in a very human way.

As for the music itself, Albarn speaks of it with mixed labels; “It’s a party record, it’s a club record, but it’s got this weird darkness about it”. The departure point for that darkness begins with the narration of Australian actor Ben Mendelsohn, who, infiltrating the album with spoken-word interludes, opens it with the words ‘I switched my Robot off’. It’s only at track 4 where the album enters a degree of familiarity through ‘Moments’ (feat. De La Soul) which switches from rap to rock with thumping bass pulsated by an arcade, retro beat which invites the listener to more familiar synth rhythms and a hint of happiness. Indeed, throughout the album the more personal songs play best (‘She’s My Collar’, ‘Strobelite’) and pick up on the carnivalesque energy that worked so well in ‘Plastic Beach’ (2010). Other times the album plays as plain top-40 pop, leaning too heavily on falsetto’s (Carnival feat. Anthony Hamilton) and rap interludes (‘Submission’ feat. Danny Brown & Kelela). Fundamentally, what is left from a lot of the playful bounce of previous Gorillaz albums remains only as ornament to more layered lyrical flourishes. Yes, Gorillaz’ usual technique of contrasting minor-key pop with fast club-beats remains, but is often clouded through overproduction as ornament.

The seminal highlights are ‘Charger’; which features Grace Jones laughing with horror whilst yelling “I am the ghost/Hahahahaaaa/Provocative” (amazing), and ‘Andromeda’ (feat. D.R.A.M); the most melancholic and emotionally rewarding song of the album (“Take it in your heart now, lover”). A better way to understand Humanz is as a series of self-portraits, drawn and re-drawn multiple times by current events to form less a work and more a text. In Humanz, Gorillaz investigate the subtlety, strategy, and production of meaning across media channels and political events. Moving between the musical rhythms of rap, pop and even reggae (most prominently with ‘Saturnz Barz’ feat. Popcaan), this is something new entirely: something both unfamiliar and undefined. Indeed, the sardonic track 6 interlude ‘The non-Conformist Oath’ says it best: “I promise to be different, I promise to be unique, I promise not to repeat things other people say.”

It is always enjoyable to listen to an album that favours allusive expression over the direct one, where meaning often appears by what is not explicitly said, but rather by what is heard. Listening to Humanz reveals the nexus of the political and the personal as expressed by the musical. The result is conceptually grounded, at times aesthetically challenging (dissonance is a useful tool to capture attention but can quickly become overcomplicated), and emotionally unfiltered. Humanz traces the ideological and aesthetic benefits of a rhetorical strategy that lacks a fixed ontological authorship, yet in doing so the avatars of 2D, Noodle and the gang go largely underused. I miss them. Humanz boldly attempts to respond to the present political situation by both diagnosing the problem and offering the solution. Even though it doesn’t quite get there, it’s a worthy attempt and a very human failure.