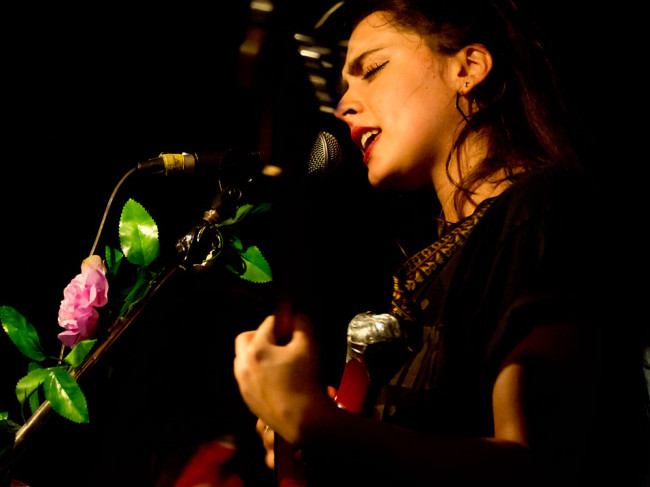 Tempura Nights start out like a band born in an era when reverb was cheap – simple three chords patterns and a haze of guitar recalling the early days of Best Coast, Wavves and all those other bands that have faded in my memory like the faded polaroids of Californian beach scenes that their songs evoked in the first place. That kind of thing is nice for a song and half, which is, thankfully, as long as it takes for Tempura Nights to begin expanding their palette. The outro of ‘Child Model’ forgoes the effects pedals for an adventure on the guitar’s low E string and a motorik beat. The more they expand, the better they get.

At heart, Tempura Nights seem to be a pop band. Like Chronic Town-era R.E.M. they keep their songs short and tightly constructed, and each player brings an interesting part to each song. The best song comes mid-set: ‘Brainroof’ sounds like Sonic Youth’s Experimental Jet Set, Trash and No Star filtered through their pop sensibility – cool, catchy, short. The worst song is ‘Jonas (The Sandman)’ – a ponderous piece of overlong shoegaze. But hey, if we started marking down Brisbane bands for imitating My Bloody Valentine, we’d have to fail half the class.

Tempura Nights finish their set with ‘R.I.P. Chix’ – a poppy rave-up where the surf guitar is combined with all the charm, economy and variety that has revealed itself over the course of their set. It’s great and Tempura Nights are a fine opening band. If they were first on another bill I had tickets for, I’d definitely turn up early to see them.

Next up are the Creases. Billed as Secret Special Guests (presumably because ‘I know you need this information for all manner of promotional activities but I haven’t quite got round to organising it yet’ didn’t fit on the posters), they look as if they met on set of a teen movie. The singer – Rowland S. Howard’s clean-living nephew – is the pale, sensitive one. You know the type, sweet but plagued by darkness. The guitarist is Oz from American Pie – the good-natured jock. The keyboardist (naturally) has the nerd part down so well that, in addition to his thick-rimmed glasses, his afro and his laptop, he gets thrown a faded Australian cricket cap which he wears for the duration of the set. The bassist – backing up from Tempura Nights – is Travis, the skater from Clueless. And the drummer – I don’t know where to begin. It’s hard to tell what his haircut is being ironic about. He’d be smashing beers in the party scene and would end up launching furniture and himself into the pool. Needless to say, I’m quite interested to hear how they’ll sound.

To convey the impression that the Creases make over the course of their set, I’ll turn to the words of Tony Wilson:

‘Two months after Ian died, U2 were brought round to my office at Granada TV by this plugger looking to break them, and I remember Bono sitting on my desk saying how incredibly sorry he was about Ian’s death, how it had really hurt him…how Ian was the number-one singer of his generation, and he, Bono, knew he was always only ever going to be number two. And he said something else, something like, “Now he’s gone, I promise you I’ll do it for him.” Not quite that silly, but along those lines.’

The Creases resurrect both the sound and the spirit of overreach that pervaded the synth-and-guitar bands of the eighties. Their songs are gargantuan constructions – blocks of circular major chords, layered with a punishing weight of instruments and backing vocals, and barrelled through with straight-as-a-die rhythms over which the singer croons lovesick sweet nothings. One chorus goes “I want to love you, forever more”, another “I’ll be there, I’ll be there for, I’ll be there for you”. They recall the mawkish end of The Church and all the reasons you never delved deeper into Simple Minds. The songs are tuneful and, from the perspective of sheer musical engineering, they are quite impressive. Like a highway upgrade. But they are not good art. Nevertheless, the crowd enjoy them. The guitarist from Tempura Nights is backstage singing along with the choruses. Each to their own and all that, but if you find yourself having to choose between the Creases and Tempura Nights, I’d recommend the latter.

I’ve been looking forward to Hinds for quite a while. Hinds are the kind of band you can look forward to. The kind of band you follow from their first two songs, whose interviews you seek out and whose videos you watch over and over, delving deeper, while you wait for their debut. They make being in a band seem like an adventure. They radiate fun and charm and excitement. Their songs make you feel like you’ve just arrived at the start of party. Yet, despite all this, I’m still not quite sold. At times, on record, everything threatens to sink under the weight of choppy guitar strums and reverb. They are exciting, sure, but are they any good?

Hinds kick off with ‘Warning With The Curling’ or the one with the kazoo. It’s not on the album and you can see why. It’s less a song than a moody riff to warm up on. Carlotta counts in ‘Trippy Gum’ and the entire room picks up. The tempo changes that sometimes feel clunky on record work perfectly live, the crowd and band anticipating them, drawing back and then leaning into them. The ‘woo-oh-woo-uh-ooh’ bits are a pay-off and the room sings along. It feels like you’ve just arrived at the start of a party.

‘Fat Calmed Kiddos’ and ‘Warts’ are next and as the band get into their groove a few things become clear.

First, their playing. Relentless touring has left Hinds a well-drilled live band. They deliver their songs with cool confidence and my fears of witnessing a C-86 shambles fade.

Second, the hooks. Apparently, Room On Fire by the Strokes is the first album that guitarists and co-vocalists Ana and Carlotta bonded over. Watching them live, it make sense. Just like that record, it seems that every guitar break and every nonsense vocal in a Hinds song has been meticulously crafted and deliberately placed, with the intent of making enjoyable songs even more enjoyable.

Third, their singing. Ana and Carlotta’s heavily accented overlapping vocals are Hinds’ calling card. In the past, I’d thought of the Libertines, but as the two of them sing, line for line, song after song, about romantic entanglements with guys, I’m reminded of the early Beatles. Not the melodies or the quality but their capacity to merge unselfconsciously into the songs. There is something of the four-headed monster about Hinds and when Ana and Carlotta tear into their choruses together, it’s exhilarating.

The peak of the set is ‘Easy’. On record, it sounds a little tentative but tonight it soars. Carlotta’s guitar lines sound immense and the band pounds out the hooks. The rest of the set is a victory lap. The chorus of ‘Bamboo’ offers the night’s biggest sing-along moment. They blaze through ‘San Diego’ then finish with ‘Garden’ and ‘Castigadas en el Granero’. Though the applause is equivocal, Hinds return, give us an excellent version of ‘Davey Crockett’ and are off.

The question is resolved in the ecstatic affirmative. Hinds are righteous. If they keep up their current work rate they’ll be back playing Brisbane in no time. When they do, get along.