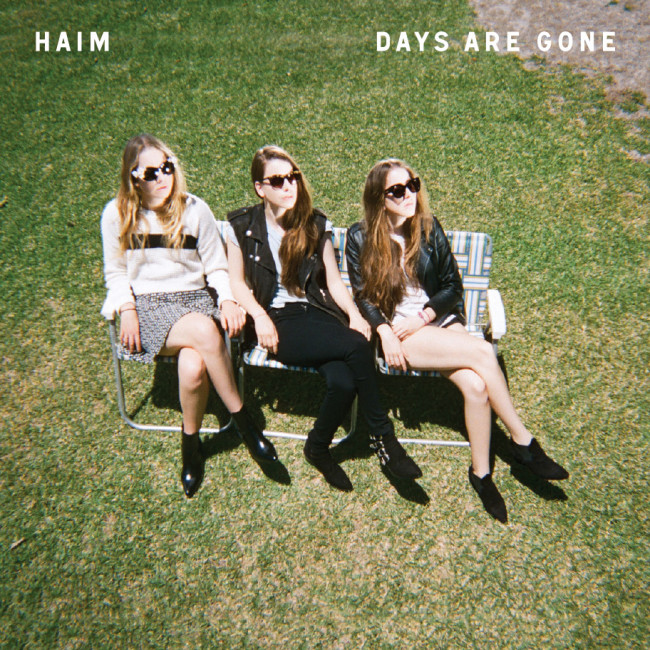 Whichever one of the Haim’s writes the lyrics is a goddamned genius. My favorite lyrical moments from this album, in no particular order:

Freckled thing, don’t fuck with the psych patients. I would like to threaten her sanity, her grade point average, her place in the world. I could buckle her floor.

By the time the Slavic lady is done with my mouth I will be ready to bite the roofs off ranch houses and spit them on pedestrians.

Ouch, she said, but my scab looks like Florida. Ouch, but look what I found in the dirt.

I agree not to self-unmedicate, but then I cut those yellow moons in half.

I worry I broke your kneecaps when I cut you down.

A bloom of contaminates in the ocean is called a red tide. Before I knew better, I swam in one. The sea was a chowder the color of dried blood. I got out when I saw the fish, bobbing like croutons. This is the consistency and hue of the sky as I drive north, using my windshield wipers to clear falling ash. Singed animals come down from the hills and run alongside the freeway.

I’m kidding, of course. Haim didn’t write these. Like Bryan Adams, Haim have mastered the art of writing a song composed entirely of lyrics from other songs. It’s how they express themselves.

No, the lines above are a sample of random lines from a book that came out earlier in 2013. Bough Down by Karen Green is one of the most devastating, beautifully created works of art ever created. I literally get butterflies when I read it — tiny little flutterings of a panic attack welling up in my belly. Because of the art, the exquisite design, it costs a little bit more than your average book. I had to wait all summer to buy it, until I was sure I had the money. Having it now, I realize it would have been worth twice as much. You can buy it here:

(if this review introduces just one person to this book etc…)

But back to Haim, who are — in my world — the complete creative opposite of Bough Down. I know it’s an unfair comparison. But just because you get mad at a shit sandwich for not being peanut butter cookies, that doesn’t make it any less shit. And I want to make it clear: I’m not a hater; I just have high standards.

I have to give the band credit though. Normally folks like me have to write how this kind of music evokes the spirit of conservatism, how it mirrors the values of spineless fear, low expectations, etc. So kudos to Haim for demonstrating their political apathy, their who-gives-a-shit-about-the-world-beyond-the-balloon-of-my-ego-thankyouverymuch-ness, in broad public daylight mere days before their album comes out.

So if I seem a little annoyed at their empty-headedness, the way people who should know better see their lack of anything beyond pure pop emptiness (the word ‘pop’ used in a backhanded way — as if Beyonce, or Taylor Swift, or Lady Gaga, or even Katy fucking Perry didn’t have at least something in their songs) as some kind of asset, well like, why should I have to read inanities like, See, they’re great BECAUSE they’re empty. Some of you IPC morons started this with Oasis: well if the people like it, then it MUST have some merit. And look where it’s gotten you now. Shit, at least Noel stole an album-and-a-half’s worth of good melodies. And Liam tried to make his brother’s bullshit mean something, until he got too rich and lazy to be bothered.

Haim’s pleasure, limited as even its enthusiasts admit, is the empty pleasure of an endless series of twinkies eaten over the course of 45 minutes. Fine enough in the beginning, but eventually destined to sicken.

Hey, let’s be positive for a second. Everyone out there, I want you to remember that no matter how bad your day is going, you at least have the option of not listening to the new Haim album. Still probably going to catch a song or two if you’re not careful though.

And I know I’m not the target audience for Haim, but if that’s the case, how come I have to see/hear them all over the place? I haven’t gone looking for Haim. They’re everywhere this week. And this review is my response — something as predictable/repetitive/redundant/lazy as the music itself, as dull and predictable as the dumbly offended responses Haim fans are likely to write in the comments below this article. What a waste of everyone’s time this band is going to be.

But if you’re a young person out there, like 15 or under, I’m willing to cut you a little slack. Look, I don’t deny the pleasure you get from this music, but your ability to be moved by it says more about the depth/breadth of your emotions, the thrill of being alive, than it does about Haim. Given the right circumstances, even Rick Astley can move someone to tears. But what made it happen, what created that moment, was whatever was going on inside of the listener. Not Rick Astley.

Because Haim doesn’t make music that inspires and sparkles. The people who listen to Haim’s music — who need something to explain the mess of themselves back to them, in a way that makes some sense of the stupid fucked-up world they’ve inherited, or at least allows them to forget about it for a few minutes — those are the people who make Haim’s music sparkle, the incandescent sun that illuminates the band’s cold dead moon.

But if it wasn’t them, it’d just be somebody else. And take note: some adult in a building somewhere is convinced that this is the best you deserve, is all you’re capable of understanding. Just think about that.

However, if you’re someone over the age of 23 who professes to care about music and you buy this album, you should be ashamed of yourself. Grow the fuck up. Remaining a child all your life is nothing to be proud of.

Here it is if anyone wants to listen. Just know that all of you, all of us, deserve better than to endure the ubiquity of Haim.