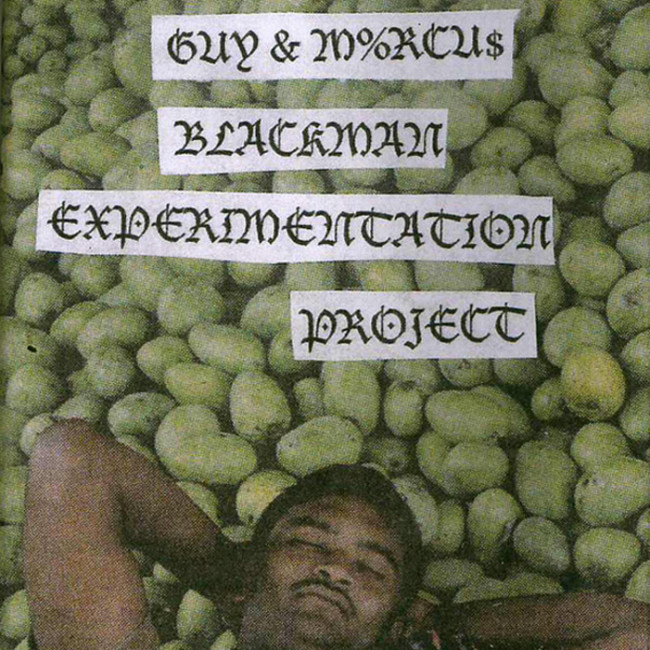 Ever sit and think a spell on dreamteam musical duos? Like, SuperHeavy should be enough to put any romance re: the supergroup completely of yer head, but there’s something always kinda thrilling about the idea of getting two disparate individuals in a room to see what sticks. Daniel Boone and D. Boon? Daniel Boone and David Boon?

The latter pairing is closer to what the Guy and Marcus Blackman Experimentation Project (feat. Guy Blackman and Marcus Rechsteiner) provide over the course of Country Pantry, six songs of chintzy Casio balladry, deranged monologues and sweaty sharehouse politics that live up to the whole cliche about records being as fun to listen to as they are to make. Marcus is in brill manchild form throughout, whether he’s procrasturbating, going through frozen meals that don’t belong to him or trying to remember his new years resolutions in July. When the boys holler “prance prance prance/take off your pants!”, it rings like Puck checking the fridge for another Carlton Cold.

“Pantry Shelf” bops so hard that, for better or worse, you never quite summon the image of a starving dude talking to himself while scanning his eyes over half empty bottles of tabasco and soy sauce. “Three Toothbrushes” rings like John Maus crying to a taxi driver. It’s not all sass though, because with “Country Boy”, they’ve conjured probably the most moving thing to come out of Australian cultural history since those dirt racer ads in the 90s. “Hate maths/hate science/I love talking shit/and pissing off the girls”. It’s sorta like the “Wild Horses” of WIN TV.

Guy and Marcus take you to dark places, but it’s only ever to stick a beak in, and it’s that weird sense of balance that makes this such an enthralling record; as Marcus puts it in “Procrasturbation”, “jerk it/and work it”. GMBEP might be a one-off, but it’s up there with the most fully-realised thirteen minute sets you’ll hear all year. Full of ersatz hooks and tuneless chanting, Country Pantry is the kind of no-stakes collaboration that makes anything with stakes seem kinda foolish.

Short of getting Mikey Young and John Farnham together, Guy Blackman and Marcus Rechsteiner are one of the most fascinating combinations of Australian people possible on paper, and the results more than live up to the idea.

(The editor has tried three different ways to get the Bandcamp embed code to work and has failed – so she encourages you to click on this link instead. Go on.)