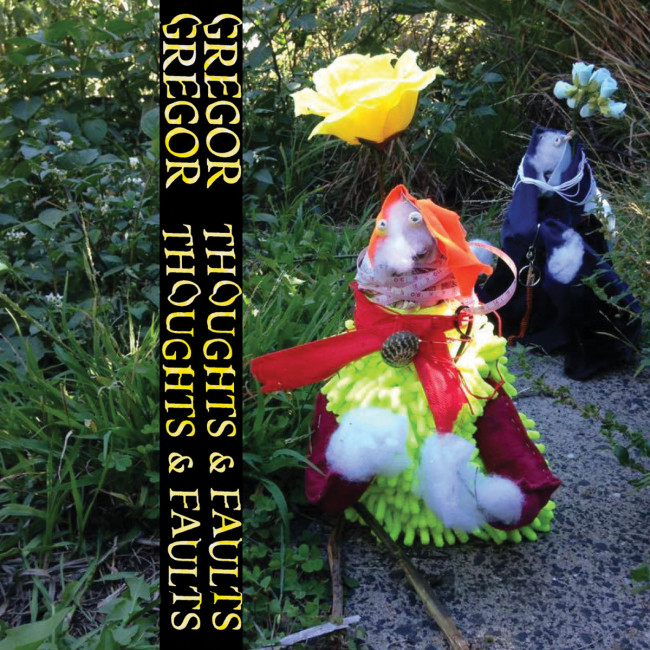 There’s two videos on the YouTube page of Melbourne lo-fi pop fellow Gregor. One of them is him sitting behind a Yamaha keyboard playing a twinkly pop tune, and the other is entitled ‘stylised trout response’, or to use the video’s description, “a romanticised look at how the movement of swimming trout might be translated into sound.”

Those two things placed aside each other is probably the best description that could be given for Gregor. It could easily be said that he writes rough draft pop music set to dollar store drum machines with elasticised bass and effected guitars grooving alongside, but there’s something lost in that, an unpinned weirdness that’s woven thought everything on his cassette debut, Thoughts & Faults.

Much of the album sounds somewhere caught between cutting room floor pickups left over from New Order, or Mac Demarco on his first two albums, plucking the melodic and tonal signatures of those bands and working them into simplistic lo-fi pop structures. Things are normally easy here in the backyard with Gregor, but he also has a tendency to out-of-the-blue start talking about the really fucked up dreams he had last night and the last time he cried himself to sleep – “everybody thinks that I’m a pantomime wearing pants and wooden shoes/but inside I’m just a grimy boy who feels the blues”.

Thoughts & Faults suffers from a lack of polish though. Lyrics like “I’m jealous and sad and it’s easy to cry but I like to think instead/things are clear and make sense when I use my head” feel like Gregor just jumped on the first thing he could come up with; ‘Weird Mullet’ ends up falling out of time with itself, and a significant portion of the tracks, when weighed up against genuinely endearing and touching highlights like ‘Remorse’, ‘3 Part Dancing Song’ and closer ‘Do You Look?’, just feel like filler – a jumbled encyclopaedia of synthesizer plug-ins and half baked song concepts.

Ultimately Thoughts & Faults just becomes tedious in it’s presentation of ideas – of which there aren’t loads. Gregor as an individual is the most compelling thing on display, his strange brand of pop just deserves more thought and restraint when it comes to actually deciding what ends up on the final cut.