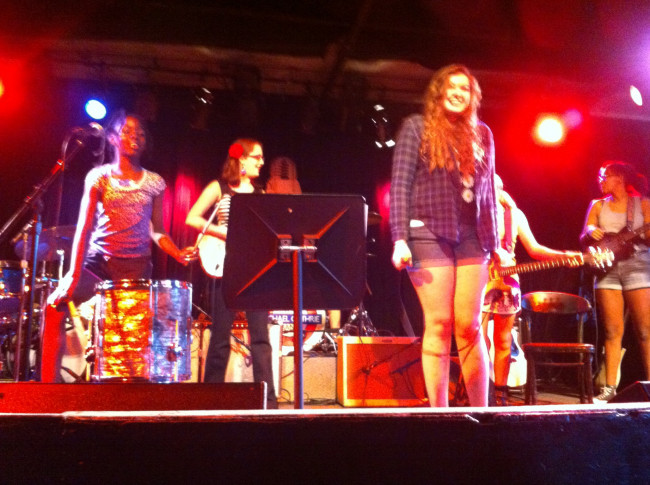 When you fall in love with Tunabunny, you fall in love with this notion of freedom – dontcha? And when you watch the videos, and you read that this whimsical place of light and paint is Athens, Georgia, you connect the two, and believe that some happy magic in the soil must nurture this pink nail polish bliss.

I’ve lived here roughly a year now. And on most nights out, that “magic of Athens” seems like a convenient tourist attraction. Our scene isn’t much different from your scene, I reckon. Dudes wield guitars and strike poses. Dudes with short beards sip beers in the bar and smoke pot outside the bar. Meanwhile the artsy contingency – the remnants of the Elephant 6 collective – has crystalized at the top of this, forming a thin iridescent crust 50 feet over our heads. And you look up and stare, and wonder how anyone young and especially female could possibly shatter it.

Two weeks ago, I picked up a paper with the headline “GIRLS ROCK ATHENS!” splashed on the front. Turns out that, since 2009, a few local musicians and volunteers have organized this one-week summer camp that teaches girls how to rock instruments, handle gear, write songs, make merch, and other cool creative stuff. AND, the camp culminated with a free afternoon concert, open to the public. Well, fuck yeah I’m going, I thought. I’m always down for girls that rock.

So I went to the 40 Watt. The tables are packed, and I’m clamming up inside, so I sneak over to a little corner and crack open my program. The first page speaks volumes:

“Girls Rock Athens is a non-profit organization…whose mission is to build female youth empowerment through music education and creation. By providing the girls with a safe space to express themselves we are aiding the girls in their development as freethinking individuals.”

So, after some proper introductions and plenty of cheering, the first four girls clamor out from backstage. They’re about, eh, 8 to 9-ish and call themselves Kitty Kat. The girl at the kit counts them off…and it’s wonderful. Like the first time you stumble into a Beat Happening record. The guitarist on the left hasn’t even plugged her axe in yet.

Kitty Kat wrote a buncha tunes. Great tunes. The one about “girl drama”, with the inter-band dialogue, could be a new cult classic in the making (“What! You didn’t invite me to the party?” “Yeah – and we decorated the cupcakes with your FAVORITE rainbow sprinkles!”). But this one, where the girls ditch their guitars, knocked me out the most. It’s called “Sparkle Butt”.

Interlude. Meanwhile, the kids in the audience – mostly girls – have been trying this whole time to peek over the three-foot high stage. So, as the rep from Guitar Center gives his spiel, I slide my chair up to the stage so that two smaller super-fans could finally stand up front. The other girls catch on quickly. Mission accomplished.

Next up were Fission Over Fusion – and by the by, is that not a wicked name? They had some senior backup on drums and bass – totally fine, though, since one chick up front totally owned the floor tom. They remind me of Pylon a bunch, although this young front person’s still a little stage shy. (And the half a dozen folk hoisting cameras and smartphones in the air, including me, probably didn’t help, either!) But that’s OK.

Then the MC tells us that the drummers of the gang wrote a few songs of their own. And I’d hate to sound like click bait, but seriously – what happened next blew me away.

Jordan Rhym. Mark that name. If she keeps slammin’ rhymes like this, she’ll blast every other dude poser out of the water. What flow. What strange, lucid images. This arrangement bashed out another tune, but, eh…well, let’s just say that another vocalist stole the mic, and she chucked out a ditty called “Play Nice, Don’t Get Lice”. Yeah. Sigh.

Anywho, the grown-up volunteers then crowded the stage and rolled off a few tunes, so that was it for the young’uns. But straight after the show, I charged the merch table, bought a T-shirt, and signed up (with an enthusiastic “yes!”) to be a volunteer next year. Dunno if I’ll even be in town a year from now, but if I am, I wanna know when this goes down again. Curse me and my perpetual clamminess – I wanted to shake that Jordan’s hand and laud her kickass performance, but the campers had convened to a corner in some huddle and I wasn’t about to intrude it. Should have.

Overall, I enjoyed this way more than most of the “real” gigs in town. Everyone’s excited – the band members, the audience, the organizers. The crowd is all cheers, not jeers. No one’s showboating. And the music sounds fresh and fun.

I just hope these kids keep at it. Not just the music-making – indeed, I doubt that all the girls I saw will persist in the instrument of their choice. No, what’s more important is that girls learn want to new skills, want to create new works, and especially want to break down old stereotypes. And what better way to build a healthy appetite for such aspirations than to strap on a guitar or jump on a drum throne and make some racket?