Girlpool – Before The World Was Big (Wichita Recordings) 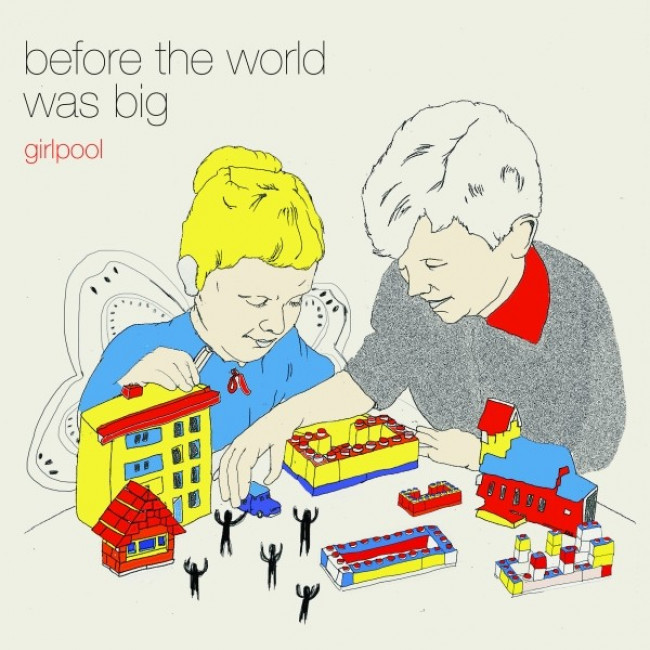 How is a girl supposed to “mature”, anyway? Or, for that matter, how does a band “mature” after rocketing to fame with a tape about sex and female desire?

Girlpool did that rare thing that not all bands do (*coughJoannaGruesomecough*) – they figured out what the press wanted them to be, and thus became something else. Mind, Cleo Tucker and Harmony Tivoli haven’t recruited anyone new; they still have nowhere to hide. But the prepubescent glee that caked their first cassette has been scrubbed away, allowing the duo to explore their adolescence with more nuance and poise.

From the surface, Girlpool seem more settled in their stripped-back setup. Cleo and Harmony’s voices still clash with glee on the few livelier songs, but most of the time, like on “Chinatown” – and especially “Pretty”, a lovely dirge with just a keyboard and the ocean waves – they sing soft and gentle, like proper singer/songwriters. The guitars tiptoe in time on the faster tracks, but generally diverge as proper guitars should. Indeed, the huge riff that glides through “Crowded Stranger” (like that big, soaring intro on…ah, fuck, there’s this one 90s song that used to rotate like crazy in my uni’s gym when I was an undergrad, and while I’ve identified several big ones, I still can’t place this ONE riff thing. The chorus goes “I feel like I’ve been reborn”…or something like that, but I RAMBLE) and the ringing tones on “Emily” are downright breathtaking. In short, they’ve improved as musicians, and it shows.

But ah, the lyrics. Methinks the chorus of the title track – sung toward the end in a round, like a nursery rhyme – illustrates best what this album’s about.

Both members of Girlpool are not yet 21. It’s a confusing time – not yet adult, but no longer teen-aged. You look around your hometown, at the trash cans and cracks in the pavement that you know like old . And you wonder how many times you’ll be here again, if this may be the last time you walk out your back yard or ride your bike down the road. It’s scary, and also really confusing. This simple refrain reflects what’s so comforting about a sheltered childhood – you don’t worry about your identity. Everything seems stable. You don’t worry about your independence, because you love and trust the people you hang with and see no reason to ever part with them.

This contrasts beautifully with “Ideal World”. Where the narrator in the previous track finds comfort in the familiar areas of neighborhood (and “tries not to think about all the ways / this place has changed”), here she walks out and “feels nothing under her feet”. Astonishing, really, how Girlpool can convey that scary-as-fuck identity shift that is adolescence with such a simple phrase.

Roundabout the middle of this tiny album (25 minutes total) is this album’s token euphoric moment, “Cherry Picking”, angled to hit the same hysteria as their breakout hit “Slutmouth”. Alas – while Girlpool do raise their voices rather admirably, and demand their independence rather amiably – “truth is that I am working / for myself and only me” – the rather obtuse metaphor of the title doesn’t work nearly as well for their signature shouty climax. And the afterthought “Magnifying Glass” that sneaks in directly after like an eager puppy shatters any serious impact that either song may have left.

At any rate, Before the World Was Big is still a huge growth spurt for Girlpool. Wondrous ventures like “Crowded Stranger” and “Pretty” prove that the duo are actively climbing higher than their immature origins – and they’re not there yet, but their progress thus far is impressive. It’s just a shame that the album burns out so quickly, before the band can really flesh out their new ideas. Or that, more crucially, Girlpool left behind some of that sharp honesty that allured many a young listener in the first place. But hey! You’ve still got some growing to do, kids. Don’t let that frighten ya.