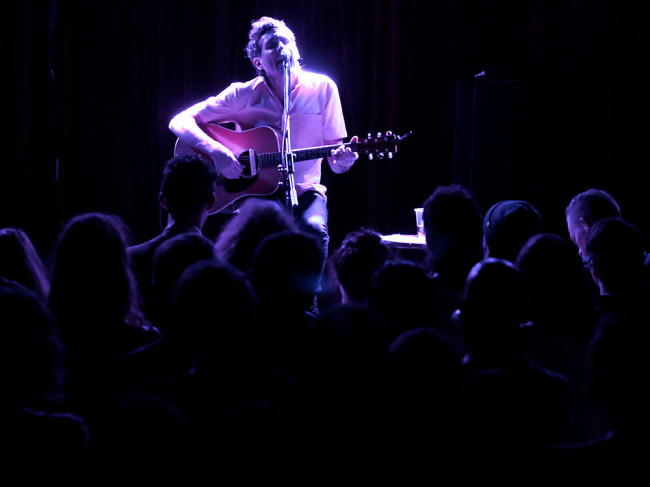 As a central creative force behind The Drones, Gareth Liddiard has been a cult presence within Australian music for more than a decade. While his group seems to have solidified its claim on popular culture with a growing string of much lauded albums, they remain resolutely on the periphery. Yet all in all, Liddiard doesn’t seem concerned. A natural presence on stage, it feels unlikely that there’s anywhere else he’d be better placed.

His early set patters on, conversational and banter-heavy. Whatever his medium, Liddiard is a natural storyteller. Politics are never far from purview. He jibes at Peter Dutton, likening the MP’s appearance to an amalgam of Queensland cop and dried apricot. When he finally cares to turn his hands loose he lights up his acoustic guitar. Conviction, energy and compact songcraft nail the audience to the floor. His fiery vocals creak expressively as he puts across his lyrics like nothing else.

As songs like ‘Shark Fin Blues’ attest, Gareth is a damn fine songwriter. Singer and audience alike fall under the spell of Shark Fins’ incessantly intensifying build. Before his hushed audience, Liddiard writhes, growls and aches. The singer becomes a vessel through which the ugly truths and damaged beauties of Australian culture are projected back upon us. The song is ejected as a blisteringly twisted rendition of mutant blues.

Both with The Drones and through his own solo work Liddiard has continuously pushed outward creatively. However, stripped back to their core his arrangements come purpose-built for an intimate and informal solo setting. ‘Taman Shud’ makes its appearance mid-set, perhaps standing out as an early but visceral climax.  Given how topical the artist’s material can be, it seems like the sentiment behind the defiant murder ballad continues to sit heavily on the singer’s mind. The song spews a succession of nihilistic and murderous images into the minds of those present, but there’s a sense redemption to be found through the catharsis of their projection. Gareth Liddiard may not be the runaway success story of Australian music, but he’s very much a part of its heart.