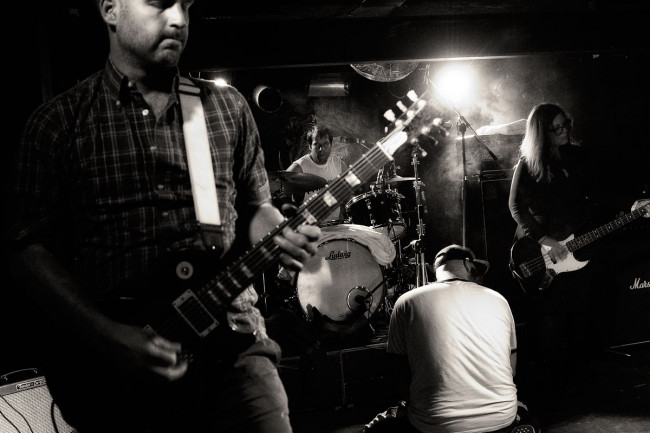 As the final notes of the final song of the night fade out, the band exits stage left. Exiting stage left was never going to be the option taken by Fucked Up’s lead singer, ol’ Pink Eyes himself, Damian Abraham, who instead leaves the stage via the front barrier. For someone who typically spends a lot of stage time off the stage and in the crowd, somewhat surprisingly this is his first foray into the audience of the night. Hugs are exchanged, selfies taken and 10 minutes later, he’s still there chatting to the people who have come to see the band play tonight.

From its more straightforward hardcore beginnings, the band has become impressively and increasingly progressive. The genius of Fucked Up is that they’ve essentially become two bands; the studio version and the live version. Abraham is the obvious focus point at the live show but his role in the studio has changed over the years. What you come to realise is that rather than being the obvious and typical singer, he’s become an instrument in his own right. The sound of his voice is integral to the sound of Fucked Up but, as with any instrument, it doesn’t have to be there in each and every song. It’s evident from the very start, when the band launch into ‘Dose Your Dreams’, the Screamadelica-sounding title track from their 2018 album, with Abraham not on the stage. But this is no lead singer with backing band prima donna theatrics (yes, I’m looking at you Gang of Youths) but because he makes his entrance ready for his part in the song. He’s there when he needs to be there, there to play his part and provide his contribution to the song.

The modus operandi that Fucked Up have adopted in the studio changes on the stage. While increasingly Abraham has become a valuable but not essential instrument in the studio, once in stage he’s the focus point for everything that happens.  It’s more than just the physical performance that he’s renown for but also the intelligence and sense of community he brings between the songs.  He talks about spending all his money on records, and dedicates a song to Rocking Horse Records. He declares Brisbane the home of punk, and in name-checking the Saints and mentioning Razar’s ‘Task Force’ and dedicating a song to the band, shows a more impressive knowledge of Brisbane’s musical heritage than most people who live in the city and probably even a fair number of the bands who come from here.

While Abraham might have a reduced role on Dose Your Dreams, sharing vocals on some tracks, not even appearing on others, the five songs they play from the album don’t get lost in translation when transferred to the stage; they all stand up in their own right. As well received as the new songs are, it’s the songs from David Comes To Life, that provoke the greatest reactions from the audience, further encouraging Abraham’s interactions with those crammed into the first few rows of Crowbar.

Consider, if you will, the sentence “I can’t believe I saw Fucked Up play in Brisbane at Crowbar.” Consider the sentence’s two possible interpretations.

Firstly, I can’t believe I saw Fucked Up play in Brisbane at Crowbar because critically acclaimed and with a renown live show, this is one of the 21st century’s great rock bands and yet here they are, playing a Saturday night show to a couple hundred people in Brisbane, what is wrong with people?

On the other hand, I can’t believe I saw Fucked Up play in Brisbane at Crowbar because critically acclaimed and with a renown live show, this is one of the 21st century’s great rock bands and yet here they are, playing a Saturday night show to a couple hundred people in Brisbane, and just how lucky am I and everyone else who’s here to see this amazing live band play at a small venue and get to see them this close up. It’s something that you know is a shared experienced between everyone that was here tonight. And we’ll all be here again next time.