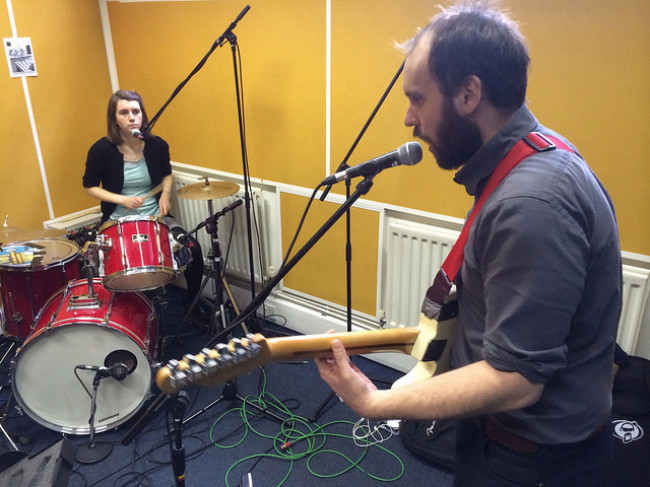 I had been working on this year end list for what seems like weeks. I’d been fighting off this nasty bug since Thanksgiving. It finally caught up with me and I spent what seems like ages in a fevered state so I can’t really feel too bad if this next bit of writing is just all over the place and makes zero to little sense (it wasn’t that bad, really; just needed some comma seasoning and a little grammar trimming – LA). 103.6 was the highest the fever reached, but I had I not gone to the doctor and had them take my temperature I doubt I would have ever known it was that high. I don’t know where I am going here so I’m just gonna jump in. Some of these were written in while sick, others while in a prescription haze, and a few while making my way through the lulls at work.

In no particular order.

Trash Kit – Confidence (Upset the the Rhythm)
A late in the year release that has been a slow grower – unlike their debut album, which hit me right from the start. The album has all the same bounce and spikiness as their debut, but the production comes off a bit quiet. It caught me off guard at first, cos I thought maybe it was more of a demo, but with repeat listens I grew to appreciate the lightness. Reminds me of how Raincoats made that leap on their third album Moving.

Hookworms – The Hum (Domino)
It was a huge leap for Hookworms to even try to top their debut album
Pearl Mystic, but somehow they pulled it off, even with the endless amount of festivals and traveling they did in 2013-2014. There aren’t as many long, spaced-out jams on this album, but they make up for it with over half the record sounding like potential singles while still keeping the overall cohesion of an album and not being a singles band. These are the guys I am most looking forward to seeing live this year. I can’t believe I’m going to fly to another part of the country or drive ten hours to see them. Yeah, it’s that good of a band.

Eagulls – Eagulls (Partisan)
Yet another UK band on my top ten list. Lately, I haven’t kept track of the towns bands are from, but I think Eagulls could be from Leeds or I could be wrong (Correctamundo – LA). Doesn’t really matter anyway. This debut is a lot of the same, but the Fugazi-like urgency filtered through Jesus and Mary Chain effect-laden guitars and songs that all have those kinda “Robert Smith when he was writing songs for the radio” hooks have me putting this on repeat most of the year.

Witching Waves – Fear of Falling Down (Soft Power)
This might be my favorite discovery of the entire year, not so much for the actual album (which by the way is as great as winning free ice cream for a year). I first heard and saw this band opening for Eureka California on their Uk tour. Within three songs I was hooked at the first show. The next night they opened again, and I was hoping they were gonna play some of the songs they played the night before. I wanted to put their record out (it was that good) but it was already in the plant. They have the stomp of Shrag and Comet Gain, but with more efficiency. It takes skill to have songs this catchy and full with only a few members. I can’t wait to see them play again. If I lived in the UK, I’d go to as many shows as I could.

Ex Hex – Rips (Merge)
Having followed Mary Timony’s music from Autoclave to Helium to the Mary Timony Band, I can say that, by far, my favorite has to be Ex Hex. Sure it sounds a bit like a Joan Jett tribute at times, but every song on this album is a single or a radio hit. One of the most fun records I’ve played to death this year. 100 listens and counting, I’m sure.

Deerhoof – La Isla Bonita (Polyvinyl)
I keep sounding like a broken record, but Deerhoof have topped themselves again. Trying to describe this band is just impossible for me. They are mathy, poppy, avant garde, rock, and at times they transcend all of those and more. I never miss the chance to see them live; as a friend once said, “Wow, they all start and stop at the same time multiple times per song.” This band is just a never-ending good time.

Pixies – Indy Cindy (self-released)
I know this one was not a favorite on many lists. Yes, the name is a huge mistake; yes, the artwork doesn’t live up to the past albums; and yeah, there are a few duds on this record. However, the fact they didn’t just sound like they were trying to relive the moment they stopped, but took chances and embraced modern production, is what saved this album. I am a Pixies fan through and through, so I’m probably being too nice. I enjoyed the album, but I do find myself going back to disc 3 of the Pixies ‘Doolittle” 25 year edition a lot more.

Dead Milkmen – Pretty Music For Pretty People (self-released)
The Milkmen have been around for 30 years now and they never lost their
sense of humor. I’ve been a fan of ’em since I first heard them
when I was in seventh grade. These punks pretty much formed my sense of
humor. Growing up in a tourist town in the south, their records were a
beacon of hope.

The Shivas – You Know What To Do (K Records)
The Shivas are a really interesting band to have on K, especially since the label has done a bunch in the garage rock scene outside of Girl Trouble. The band are a bit more sock hop than say hot rod, but the record has that Americans doing a merseybeat sound, which is just Brits redoing Buddy Holly and Little Richard. It’s always fun to hear these classic styles filtered and made into something new.

Andy Stott – Faith In Strangers (Modern Love)
Andy Stott can do no wrong, it seems. From his album every year pace to his collaborations, he’s pretty much been flawless. The thing that drew me in right from the start was all the industrial sounds of machines clanging, gates closing, chain link fence rattles, fog horns and the everyday sounds of the things around us. I spent much of my youth on a bike doing BMX, either spending hours in parking lots doing tricks, finding jumps, loading docks, handrails to grind, steps to jump up or down, walls to ride. Everything was not just an obstacle, but a new opportunity. These sounds he finds to build off of don’t distract or annoy me at all; rather, they’re all very soothing.