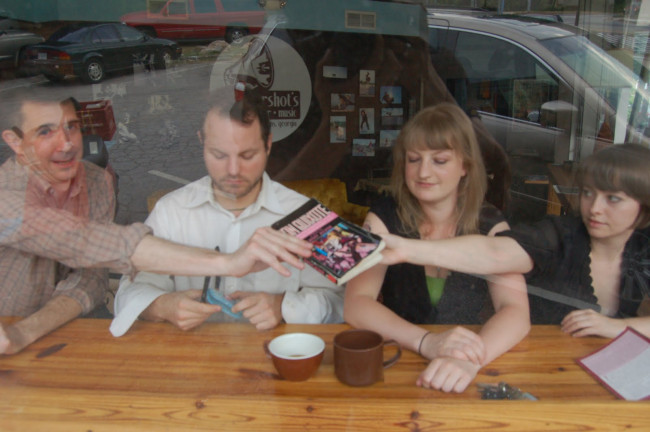 The second (2) time I listened to the new Tunabunny album ——————– it was out of a sense of desperation, not negative, seeking reassurance that the last five (5) years haven’t been a total bust. It was on the fucking 381 where power steering meets twisted suburban corners. I know how happy Tunabunny have made me in the past, and am sometimes still surprised at my own self-loathing, the way I shy away from stuff that might please. It made me feel confused, alienated, aware of my failings. But very sweetly, not in a vindictive way at all. It was ___________________, ___________________. My favourite song is now ——————– because it’s jittery.

The third (3) time I listened to the new Tunabunny album ——————– it was out of a sense of growing expectation, not unfounded, the knowledge that anger can be used a positive force. It was virtually, not in any space you’d recognise. It made me feel special, enlightened – the twisting stops and starts and playful vocals and grotesquely distorted, sometimes rudimentary, beats. Yes, it was ___________________. Cinematic, if we’re talking Pan’s Labyrinth. My favourite song is (rather obviously) ——————–.

The fourth (4) time I listened to the new Tunabunny album I was in Gracelands: swiping and wailing, amazed at the patterns in partially broken brick walls. If I’m being honest here – and why wouldn’t I be honest here, we’re not in Seattle any longer, Lester – then I have to admit the words keep
Skipping.

The fifth (5) time I listened to the new Tunabunny album it was out of a sense of idle worship, always somewhere secret. No. Fuck you. You can’t come in. I can begin and end sentences with the phrase ——————–. I cannot, however, walk away from this, no matter how hard I try (which isn’t very hard – see note about Seattle above). My favourite song on the new Tunabunny album is now ——————–, but that just goes to show how traditionalist I have become. I never do what I

‘m supposed to do but in behaving that way I am doing precisely what everyone is expecting of me.  THE ONLY PERSON ON THE BUS THAT NO ONE IS SITTING NEXT TO. Here. have a listen. ——————–.

Stop. Scratch. Rewind. Can’t stop it. Insert a few buzzwords, some song titles and lyrics and watch this review BLOSSOM INTO LIFE. Serious. Everything is there, it’s just your imagination that is tardy. I will print the best 10 entries RIGHT HERE MOTHERFUCKERS.