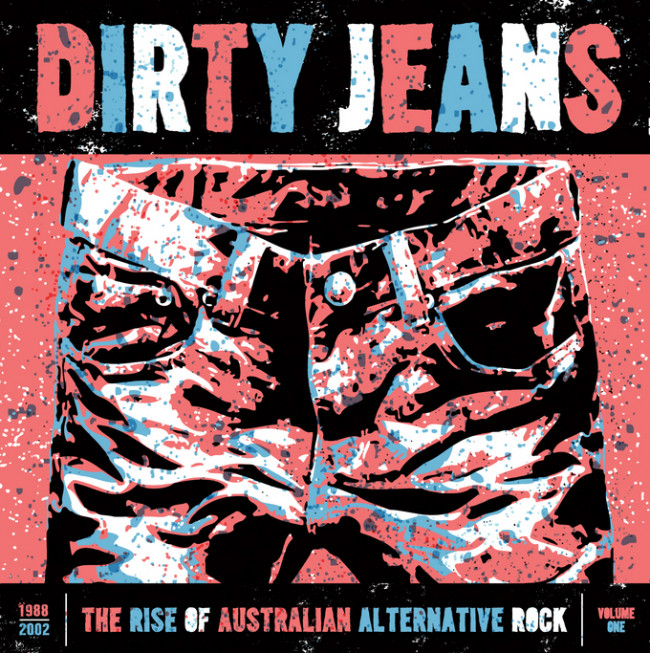 Well, how bloody convenient! So here we were, musing about how Triple J has gripped the Aussie music industry so tightly that even writers are falling all over each other to sound exactly alike – when along comes this compilation. Fantastic! Now we have here a bona fide aural coffee table book – 25 tracks, it is – upon which we can demonstrate when Aussie alternative rock was right and righteous and dissonant, and when the chords started seaming together into one interchangeable product.

The story of Dirty Jeans – as those above call it – opens in 1988, and inevitably accelerates into a raucous, roaring, and downright muddy riot. GOD sets the scene, as latter-day, no-nonsense, metal-minded punks (“My Pal”); Beasts of Bourbon arrive shortly thereafter to guzzle all the beer and devour the stage with sludgy, swampy vengeance (“Chase the Dragon”). And just when we think that too much sausage is being slung around, here comes Spiderbait to save the day with more streamlined, buzzsaw power pop (“Buy Me A Pony”). WHAM! Then comes the good-natured sledgehammer of Tumbleweed (“Hang Around”). Night to day to night again. No hegemony so far, yeah?

Except your head’s screwing off its hinges, and you might suspect by now that Aussies have no ear for subtlety. Wrong again – enter the title track, by megastars Magic Dirt (also – savor the moment, this is the one of the very, very few chicks on the record). It’s the perfect pivot point, really – the sweetest merging of witty lyrics, poppy handclaps, and buzzing fervor. Now, Adelita can’t quite shake ya down like Kim Deal or Tanya Donnelly (in fact, if you wanna be a stickler for proxies, you could file her under Sheryl Crow), but she’s still a cheeky one.

Grunge is in high swing by now, as is Metallica, and you betcha that Australians sucked it all in (as most Western folk did, no doubt). Yet throughout this next stretch, we’re still treated to a glorious patchwork of creative noises, even if it is all cut from the same guitar-heavy cloth. Can’t quite pin either of those above mentioned trends on the Meanies, for instance, whose “10% Weird” was so 150% obnoxious that ya can’t help but cheer on what must’ve been their secret plan to upset the establishment. And what loveliness is Screamfeeder, who evolved miraculously from drowsy cock rock to college-friendly belters like “Hi Cs”.

Oooooh, but I’m falling hard for this. Who’ve thunk a song that suggests suicide could be this catchy? (Certainly not Pearl Jam. Poor Jeremy.)

Alas, Front End Loader mark the end of that radiant streak of crushingly good pop. Derivative doldrums begin to creep in. Frenzal Rhomb kills the party with their inane Green Day imitation, a stint that’s sullied even further by their relentless sunshine attitude. The title alone is enough to elicit eyerolls – “Never Had So Much Fun”. Extra plaudits to you if you can stand a minute of this.

The trapdoor with the steel slide to fame and fortune beckons – no more dangerous types from here on out, no sir, not on our radios – but not without a few last hurrahs for jaded college kids everywhere. In particular, Ammonia – really, you can’t deny how overwhelmingly Americana “Drugs” sounds, but you can still dig out a kernel of subversion in what must’ve been a massive hit. And face it: fewer titles can be as clever as “I Sucked A Lot of Cock To Get Where I Am”. (Fortunately, it’s a well-built power-pop song, too – cheers, Regurgitator.) The last vital signs pulse in Gerling, spirited and joyous and a little rough and kinda Pavement-like (“Death to the Apple Gerls”). Suck your Denmark, Sweden!

But now the trapdoor beckons, and the last seven tracks tailspin into safe and sterilized packages of perfectly balanced production. Five seconds is all you need of “Harpoon” to know just who Jebediah are trying to ape (and if you only listen for five seconds, you’ll be spared the cheesy chimes and painfully wrought whiney pop vocals). Five seconds should be all you can stand of the blokey faux-Skids “Roll On” – yes, I see how enthusiastic and extroverted and well-off you are, The Living End, so please back away from my face and take your good times four-wheeler elsewhere. The rest follow in the same manufactured machismo dribble – Grinspoon, Powderfinger, 28 Days, and that ever-hashed-out-Pearl-Jam-slow-jam from Something For Kate. All this, of course, as a strategic build-up to the most recent Jet-setting (GET IT?!?) hams, the Vines.

Right. So at this point, you could ask me, “Well, is this a great compilation, or what?” OR, you can step back a minute and ask, “So what does this tell us about the state of the Australian money-making machine/music industry?” Since I’m here and you’re there, I’ll answer both questions.

One, I have no clue how “good” a compilation this is – I mean, it’s like any of those “Best of the [insert decade here]” gimmicks, isn’t it, which cashes in more on the public’s collective memory than the true hotshots and visionaries of the day (you’ll never see Captain Beefheart on a 60s compilation, eh?). You native Collapsians will know way better than I where the gaps and snuffs lie. AT ANY RATE, from what I’ve heard, I’d say that non-Aussies like me should do themselves a favor and give this a spin if ever they’re suffering from a deficiency of RAWK in their diet.

BUT. To the more pressing issue – if these 25 tracks represent the trajectory of a national pop radio, then where does that leave us on the homogenization front? What we have here, ladies and gentlemen, is cold hard evidence. Do ya think that Beasts of Bourbon – with their red-rimmed eyes and drunken stagger – would be allowed in the same studio as those handsome young Vines? Or that the goofball Gerling would be permitted anywhere near Grinspoon? Not likely. To put it bluntly, then, this comp proves that Triple J weeded out the weirdos and savages to accommodate for well-adjusted young men that can tune amps proper loud and attract international millions with musical products that are safe to export ‘cos they sound so bloody familiar and inoffensive.