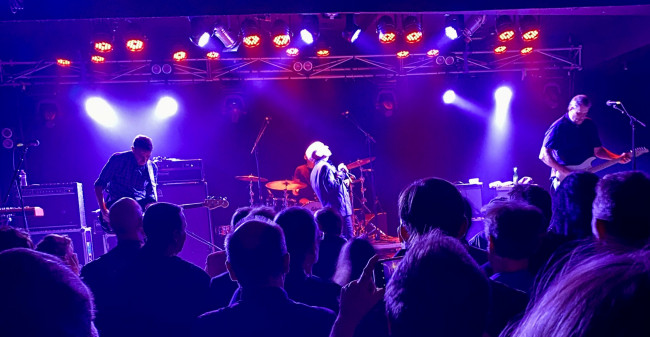 For the last year it’s been like a nuclear winter for the live music scene in Melbourne. Fourteen months to be specific. The last live gig I saw in Melbourne (apart from buskers in Bourke St) was Julia Jacklin at Melbourne Zoo back in February 2020. That was just before Covid Lockdown 1.0 happened. I spent the last year pining for live music and streaming gigs (or other recorded media) in my home office (#WFH). There were some great ones; I particularly loved Nick Cave’s Idiot Prayer alone at Alexandra Palace in London (of course), Houndmouth’s Hoosier Halloween gig live from the Buskirk-Chumley Theatre in Bloomington, Indiana, and how can I fail to mention my fave, Joey Burns from Calexico, solo at Push and Pour Coffee Shop in Boise, Idaho?

I also had various forays into my 12-year-old’s musical tastes – things like Billie Eilish and Dua Lipa singing live from their respective homes. I appreciated them. I discovered the excellent podcast, Song Exploder, and its TV companion series on Netflix (especially the episode featuring R.E.M.’s Losing My Religion). Vinyl revival has been heaven-sent and online shopping kept life bearable. AND… my other-half taught himself guitar and banjo, then bought me a ukulele. With our kid on piano, we became our own little Partridge family band, playing covers out of sheet-music books borrowed from the library (… no plans for live events any time soon).

But none of this comes close to the real world of ‘old’ Melbourne. How can you compare sitting at home with family to watch a gig on the iMac, to being present in a theatre with a few hundred other sweaty souls, being deafened by the lead guitar and your chest caving under the pound of the bass?

There’s more to this story, for this particular gig last Friday night was a special privilege. More than two years ago I bought tickets to see Died Pretty, but unfortunately when frontman, Ron S. Peno, was diagnosed with oesophageal cancer shortly before the tour, they were forced to cancel. I was so sad, having been a fan for many years, I was very sad for Peno; I’ve seen him live with the Superstitions a number of times. Fast-forward a year when, in early 2020 after his mountain of treatment, he was in remission and a new schedule of Died Pretty gigs was announced. I was so happy the band could tour, but then… Covid-19 happened.

Well, good on the Croxton Bandroom for getting the gigs back on in 2021. This particular gig was split into two performances in the one night, a big undertaking. Luckily in Melbourne we’re now past having to wear masks indoors (for how long…???) but there is the constant reminder of the virus, with QR codes, hand sanitiser, signs warning ‘NO MOSHING’ and rows of steel fences across the floor so it’s impossible for the crowd to push forward. We all understand the consequences; we, the diligent middle-aged Melburnian crowd, value our freedom enough to not fuck it up and risk Lockdown 4.0.

Having already played one set, the band emerge and open with a low key ‘A State of Graceful Mourning‘. Peno welcomes us to ‘the late set’. He’s suave in his polka dot skinny suit, black shirt and scarf. He looks well and is energetic, strutting and skipping across the stage, engaging the crowd with his spooky stares, never giving less than 100% with his emotive vocals. ‘Desperate Hours‘ is up second and revs the crowd into the headspace that is Died Pretty. Peno arches up to the spotlight like he’s seeking something divine, and belts it out with lead guitar, Brett Myers, and bass, Steve Clark.

It’s definitely been too long between gigs. The lights at the back of the stage are blinding; Myers’s guitar is piercing; the B.O. in the room reminds me of the silverback gorilla at Melbourne zoo (the crowd is about 80% male). That’s ok, I’ll bear it to be here (*remember when cigarette smoke used to mask all the human smells?) I can’t hear enough of the piano, but memory fills the gaps. I want another drink but am fixated on the stage and don’t want to move. For someone who’s spent the last year predominantly in a home office, this assault on the senses is WAY overdue.

I may be exaggerating, you’re right, the sensory experience of the new Covid world has nothing on the olden days. I’ve been trying to find the right word for my memories of Died Pretty concerts in the late ’80s. I think the only way to describe it is visceral memory. Kind of like muscle memory, but this is of your organs. Their old gigs at now-extinct venues such as the Old Greek Theatre in Richmond, or the Venue (great name) and the Seaview Ballroom in St Kilda. Bouncey dance hall floors, heat, beer, sweat, smoke, crowd surfers and divers, sheer joy of being crushed and dragged up front. It was crazy fun. I still like being up front in the middle but the new Covid world has spoken and it’s a Draconian beast.

Meanwhile, back in the Croxton bandroom…

Many classics come out – ‘pop’ songs (dubbed by Peno) including ‘Blue Sky Days‘ and ‘D.C.’, all jangly guitar and singalongs. Crowd favourite, ‘Sweetheart‘, has all the snaggy guys in the room lifting arms and chins to the sky and hollering along. The last song before the encore, my personal favourite, ‘Winterland‘, is a frenzy of noise and if you don’t lose a few auditory nerves during this one (*AKA ‘Ed Kuepper level loud’), there’s something wrong with the mixing.

A moment of respite for the band is allowed before Peno and Myers return for a lo-fi ‘Everybody Moves‘ that’s quite lovely. Peno declares he’s tired but manages two more, finishing with a rousing thump of ‘Godbless’.

I am so impressed. My 2020 live music drought has been broken and it’s fitting that it’s this band. Peno may sing, ‘The Sunnyboys, godbless them, and godbless you’, but (without any religious persuasion on my part) in my mind it’s, ‘Died Pretty, godbless them’. They really made this gig a privilege to experience.