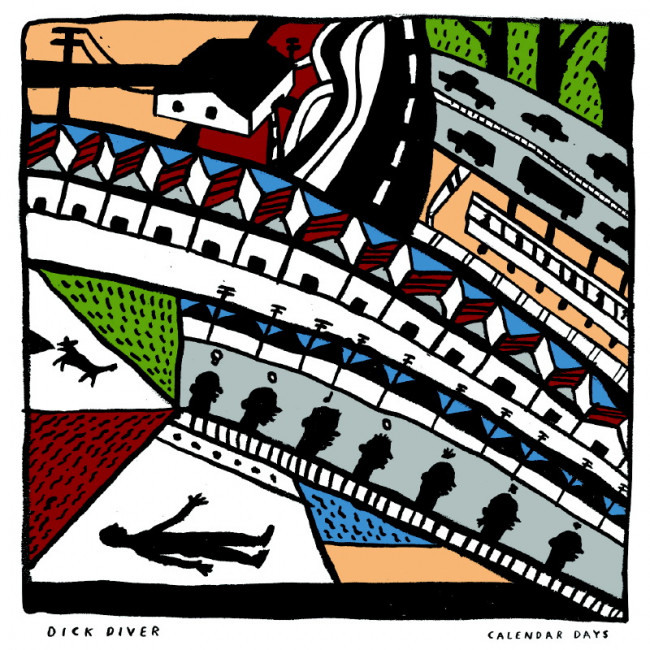 A band’s press release, quoted recently on Mess+Noise, cited their influences: The Go-Betweens and The Clean, yet again, as well as Paul Kelly and Ed Kuepper. One typically cheeky commentator wrote, “If they were truly influenced by these guys they would spend more time writing their fuckin songs”. That’s a point that could be aimed fairly at a whole heap of this country’s best and brightest of the last few years, and for me it’s what separates Dick Diver. When someone asks me what’s going on in Australia, I – well, I tell them about Blank Realm, and what I tell them next depends on what they’re into, but if they’re into songs, I tell them about Dick Diver.

Their second album, Calendar Days, opens with the uncharacteristic sounds of a drum machine and organ chord (‘Blue & That’). The scene is a playground – “Spare tyre cover blazing in the sand” – where (presumably young) people are getting high:

These lines encapsulate something Dick Diver do well: they go into memories and margins, the abandoned playgrounds and overlooked utilities in our lives, and wave out. It’s what a lot of the best music does. Their lyrical trick is to describe moments, because after all that’s how we experience life, even memories and abstract concepts like love. So even Steph Hughes’s ‘Gap Life’, a vague rumination on the turns a life has taken, starts in a specific time and place: when there was not much going on between Channel 2 and Channel 9: “So I went back to the beginning without rising from my seat”. They don’t describe forests, or even trees, but the feel of bark and the sound of leaves and then leave the rest for you.

On Calendar Days, Dick Diver maintain that intimacy while rising from their seats and getting out of the house. ‘Alice’, a brighter mix of the track from last year’s eponymous EP, is an all-too-rare example of coastal city Australians dealing with the rest of Australia (it makes me think of Alice Springs), or for that matter people with access to mainstream culture dealing with the rest of the world. “Dancing hip to hip/She said, ‘I think you’re deadly but/Don’t really wanna come to the bronc’s’”: for those who don’t know, “deadly” is a compliment used by Aboriginal people, and fuck it’s cool, but it’s a welcome shock in my inner-city record collection.

Openness is one of the strengths of this album. It’s less of a single journey than their stunning debut New Start Again and most sadly it’s missing the extended instrumental flights, but the benefit of this series of short trips is that we see more places and people. The first album, with songs largely written by guitarists Ru Edwards and Al McKay, apart from the two separate (but important) contributions by Steph Hughes and Al Montfort, came close to establishing a Dick Diver sound: delicate, Television-gone-rural twin guitars and an overall sepia tint. Calendar Days, by contrast, sounds like a confident band flexing and stretching its collective muscles, playing with different colours because it can.

In that respect, as well as more obvious sonic ones, it seems to draw from the relatively un-drained mid-period of The Go-Betweens, with ‘Water Damage’ and ‘Lime Green Shirt’ reveling in lush and careful arrangements many of the other bands they’ve “influenced” wouldn’t be seen dead in. The folky strums of ‘Alice’ and the cute-but-cutting character study of ‘Boys’ might finally answer my question as to when it would be cool to pull out my Simpletons CDs in polite company. The shaky horns at the end of ‘Blue And That’ sound like ‘Satellite Of Love’ – but I mean the lo-fi version by Love Positions (the underrated duo that wrote ‘Into Your Arms’ and half of ‘Don’t Go Now’; Half A Cow would do well to re-re-release Billiepeebup in the current climate). I don’t mean to be obscure, but I know those bands don’t get name-checked much in discussions about today’s nice-guy janglers; instead it’s always Flying Nun. That reference is often based on nothing more than a guitar sound and a bit of vocal reverb, but Calendar Days’s closing track ‘Languages Of Love’ genuinely evokes the light whimsy and homespun psychedelia of Tall Dwarfs without missing the all-important heart (just like Montfort’s other band UV Race). In fact there’s a Tall Dwarfs song title that could serve as Dick Diver’s manifesto: ‘Think Small’.  Not insignificant, not meaningless, not even twee, but small. To say it’s the small things that matter is a cliché, but then so’s everything – and that’s exactly why the small things matter.