Demos of the week | Moon & Negation 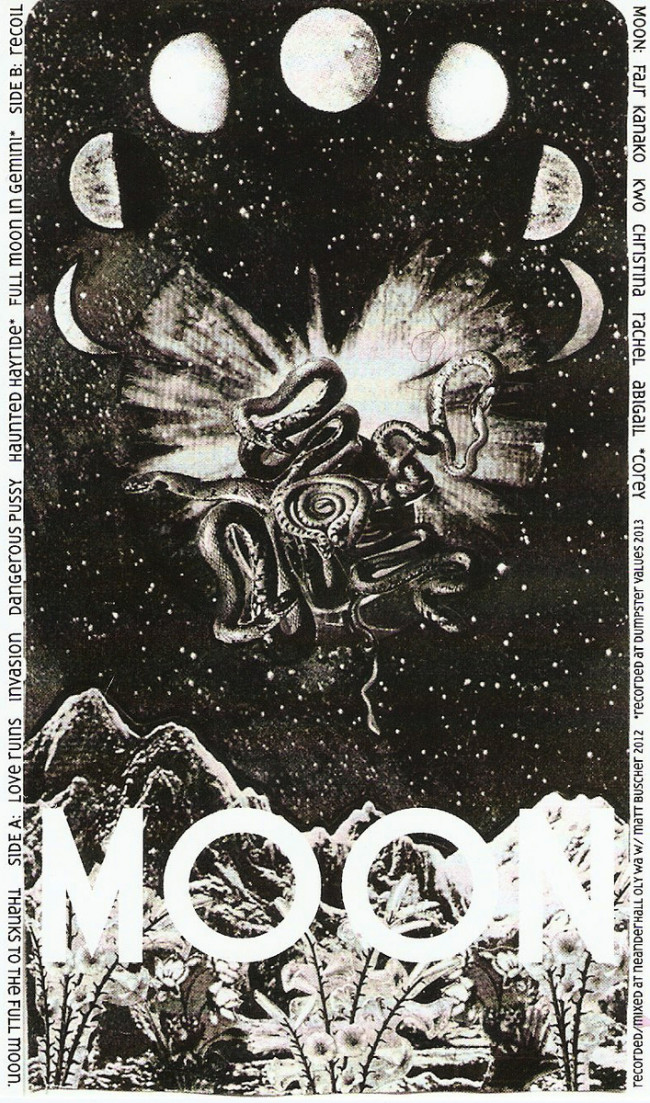 This tape was passed to be by Kanako, the drummer/sometimes bassist/often vocalist in Olympia’s excellent Broken Water, who I was hosting recently after their show in Western Mass. We were walking around my sleepy college town on a particularly Olympia-like rainy day, eating Moroccan food and sharing stories about the ever-present struggles of being women musicians in a (still) male-dominated DIY/punk scene, when she mentioned this new project that she was involved in; an example of sorts of the positive things that can sometimes grow out of frustration with a lack of broader progress in your artistic community.

Moon are a seven-piece Olympia supergroup (in all senses of the word) crafting psychedelic feminist punk with two bassists, two drummers, plenty of eerie synth & gnarled guitar lines. In addition to featuring former & current members of the aforementioned Broken Water, I only realized later that the Rachel listed in the band’s ranks is none other than Rachel Carns of Kicking Giant & the Need (aside: ask me sometime about how Kicking Giant’s ‘She’s Real’ just might be the most perfect pop song ever). The cassette version of this demo features six songs, but for online listening purposes, Moon have offered three of them: a sprawling, fuzzed-out ambient instrumental (‘Invasion’), bookended with two killer vocal tracks that were the highlights of the tape in my mind – the dark, post-punk detachment of ‘Love Ruins’ & the Confusion Is Sex-worthy no wave snarl of ‘Dangerous Pussy’. All punk should inherently be feminist punk, but until reality bears that out, I’m really glad that bands like this exist, if only to facilitate more tapes passing hands from one girl to another.

One of the bands spoken of with mutual excitement during the trials-and-tribulations-of-being-a-female-musician conversation discussed above was Negation, from New Orleans. I had originally stumbled upon them as a result of following the writings of bassist/sometimes vocalist Osa Atoe, who did the incredible zine Shotgun Seamstress – while we’re on the subject of feminist punk, you owe it to yourself to read the interviews & essays collected on her blog for some seriously smart perspectives on the intersections of race, gender, sexuality & DIY music.

Osa also happens to be a former member of The New Bloods, a band that did some of the most magical things with bass/drums/violin this side of The Raincoats & whose full-length on kill rock stars is one of the most sorely overlooked albums from the last couple of years, as far as I’m concerned. Maybe not coincidentally, my favorite songs on Weak Artifact are the ones where she takes a turn at the mic (check the harrowing put-down of a “fucking twisted” Nazi on ‘Son Of No One’, presumably NOT written about our friends in Iceage). If the New Bloods occupied the artier Raincoats-ian end of the post-punk spectrum, Negation push things closer to the minimal anarcho-punk end occupied by the early version of The Ex, particularly when they unleash frantic male/female vocal trade-offs like the one weaving throughout ‘The Weakling’. It all gives me some serious flashbacks to my teenage years of hanging out at shows in the zine-littered collective houses of Houston, Texas that have no doubt since been torn down to make way for more luxury condos, when I was radical enough to feel weird about the fact that there weren’t more girls in the bands I went to see, but not radical enough to conceptualize the simple solution to that problem. Here’s to there being a feminist punk band in every town, someday.