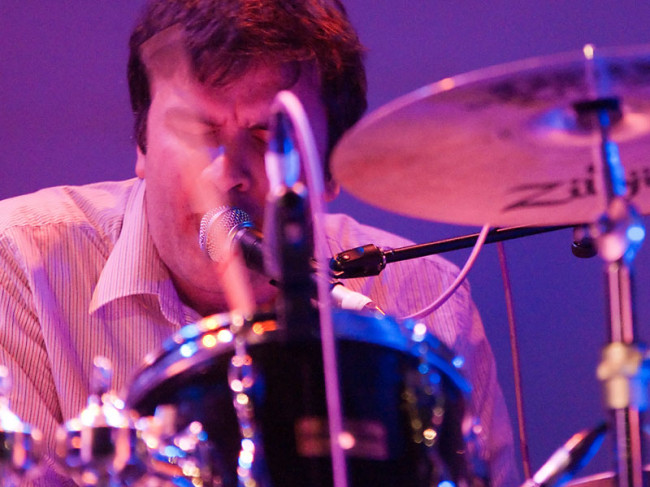 Blank Realm WAILED. Starting with Sarah Spencer’s WAIL, Ono/Ayler ululations sharp enough to pierce the walls and floorboards of Brisbane’s Zoo and still sting the pricks in line outside, the revved-up ‘Acting Strange’ was a soundtrack for jigging impatiently on the entrance stairs. Inside, the band WAILED on their instruments in the North American sense of the word: aggressive, pugilistic. Between songs, bass player Luke Spencer shook out his hand like a boxer, tight from hitting strings that sounded like they’d been dusted with sandpaper grit and glitter.

Blank Realm sound great in a relatively big place like this, booming (Dan Spencer WAILED on the drums) and epic (Luke Walsh seriously WAILED, as ever, on flaming lead psych-guitar) and neon (Sarah wailin’ again on the keys), justifying the ROCK side of the experimental-/psych-/etc- hybrid genre tags that get hung on them. Current single ‘Falling Down The Stairs’ jettisoned the recording’s pastoral jangle (forthcoming album title: Grassed Inn) for more warped, alien timbres and warp-speed tempo. Both band and audience FLAILED. There was some sort of surprise and victory in a bunch of people dancing stupidly up the front for this “support band”, even if it was mostly the usual loyals in a different space.

More new stuff: one where Sarah’s keys conjured Dylan’s paarping harmonica and one called ‘Reach You On The Phone’ (it might have been the same one, song-wise they seem to be riding the groove they’re in, not a bad thing). They ended, too soon, on ‘Go Easy’, which they didn’t. Dan’s hazy tale of reclining and smoking in the passenger seat was recounted from the lip of the stage, leaning forward and jabbing his finger with each spat word: “We gotta go to school today, gotta learn THAT! STUPID! SHIT!/Soon as I can get a car to drive then I’m gonna be DONE WITH IT!”

Deerhunter go easy. The other time I saw them, also at the Zoo, I fell asleep standing up. I loved it. It seemed like they were out to get me again when they started this set, beautifully, with ‘Earthquake’ – the drugged drum machine, soundtrack-to-a-video-of-a-flower-unfurling opener of Halcyon Digest – in the dark, but for a single green light. Indie womb music. But then straight into the brasher ‘Neon Junkyard’, first song off Monomania, as if to juxtapose the two eras. Of course, there isn’t a huge difference. For a few albums now, they’ve kept pressing adjacent alt-rock pleasure points from slightly different angles (in this set I was surprised to feel the occasional Pixies vibe from the new album numbers), while to their credit developing a story-arc and a personality, largely revolving around “eccentric” frontman Bradford Cox.

This show didn’t have any replayed songs, no half-hour ‘My Sharona’, not even the glammy leopard-print-and-leather mugging of Deerhunter’s recent TV appearances; for better or worse, it was kind of professional. Besides a bit of faffing around between songs it was just the hits – ‘Desire Lines’ came out early, Monomania’s ‘THM’ brought welcome range – played nice and loud, under that green light (that elegant bit of difference). Massaging those spots, spooning out the sugar, with time for beer runs.

‘Nothing Ever Happened’ already has the sort of intro built for audience recognition and response (“fan fare”?) and it didn’t disappoint, but here they added an extended one chord outro that segued into Patti Smith’s ‘Horses’, or at least Bradford singing the words to the “horses” part over that chugging chord. It wasn’t quite Patti doing ‘My Generation’. More like Bradford grabbing Thurston’s ankle as he grabbed Patti’s ankle* as she grabbed Brian’s ankle* as he grabbed Muddy’s ankle as he grabbed something I can’t see from here. (Maybe the usual “standing on the shoulders of…” metaphor is upside down? Or maybe just some people haul themselves up, some don’t. But everyone starts at the ankle.)

Back on their own feet, set-closer ‘Monomania’ was a noisy treat (I think; my attention was wavering by this point). The encore, ‘Cover Me (Slowly)/Agoraphobia’, was back to womb-world. I wasn’t born again – I didn’t even fall asleep this time – I just got drunk and swam in some washy guitars. I did come out feeling refreshed.