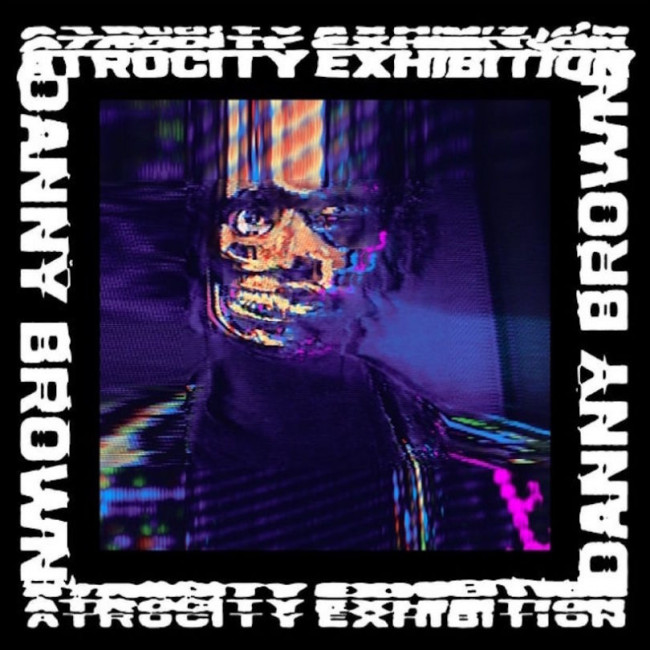 Danny Brown sounds like no other rapper from his hometown Detroit, fuck, he sounds like no other rapper, period. And when Danny Brown reveals he’s releasing an album called Atrocity Exhibition (which takes its namesake from a Joy Division song/J.G Ballard novel of the same name) on Warp Records – the same label that houses Brian Eno and Aphex Twin – it’s bound to be stimulating at the very least and ground-breaking at the very best (spoiler alert: it achieves both).

In the lead up to the release Brown has cited Bjork, Korn’s Jonathan Davis, Quentin Tarantino, Curb Your Enthusiasm and Raekwon’s Cuban Linx as influences. The mix is hardly surprising if you’re familiar with Brown but despite all of the heightened excitement surrounding the release due to singles such as ‘When It Rain’, ‘Pneumonia’ and ‘Really Doe’ – no one could have possibly taken a jab at how the final product would sound.

Opener ‘Downward Spiral’ is a nightmare. The previous two albums, XXX and Old, were for the most part hedonistic and fast-paced with drug anthems like ‘Blunt After Blunt’, ‘Dip’ and ‘Smokin & Drinkin’. A track like ‘Downward Spiral’ strays far from the atmosphere of the club and sits somewhere a bit more desolate, burdened and lonely. Brown chants “I gotta figure it out” as he spells out that he’s been alone for three days struggling, drinking Hennessey until his stomach is hot like a furnace and feeling like no one cares for him. Brown has throughout his career been open about his struggles with depression, anxiety and drug-use and ‘Downward Spiral’ is a crucial, brute rant. Sad and intoxicating – you almost want to reach out and hug him despite being aware he’s probably too paranoid and downhearted to reciprocate.

‘Tell Me What I Don’t Know’ follows with a beat that Brown explains he thought could be an inclusion on the Warriors soundtrack. The song is less rough around the edges than its predecessor – it puts forth some more subdued, classic Detroit street rap over frantic percussion and foggy synths courtesy of long-time collaborator Paul White. ‘Rolling Stone’ is similarly subdued with its brooding hook and funky bassline. But Brown is still distrustful and introspective as he spits “some people say I think too much, I don’t think they think enough.”

‘Really Doe’ featuring Ab-Soul, Kendrick Lamar and Earl Sweatshirt is exactly the kind of song that will have hip-hop purists (who have spent the better part of 2016 grappling with Future and Young Thug’s articulation) silenced in appreciation. With a Black Milk beat that’s as jarring and sinister as something Jeru the Damaja or Kool Keith would have spat bars over, the entire song is urgent and unpredictable. ‘Really Doe’ departs with a triumphant Earl Sweatshirt verse reminding us why he was the only OFWGKTA alumni we truly ever cared for.

With lines like “ask your girl why her mouth on my nuts” and “why you got your couch on my Chucks?” the kind of juvenile braggadocio and intrigue that Earl’s debut self-titled tape in 2010 introduced to listeners is back in blazing glory and has me wishing his verse was at least five times as long. And that’s without mentioning Brown’s introductory verse which is just as perverse and assured as well as the switch in vocal styles with some of raps heaviest hitters passing the mic.

‘Ain’t It Funny’ is the highlight. The song is the closest the album gets to ska with its demented horror house, foghorn laden beat with droning synths and aggressive bass drum at the fore. “Jokes on you but ain’t no one laughing,” Brown says, and the song is so paranoid and unsightly that I feel personally targeted by that line. The instrumentals sound like Madness and Death Grips worked together and had a really bad time doing it.

‘Pneumonia’ and ‘Get Hi’ are also highlights with the former being the closest the album nears from the corner of the room to the dancefloor with those inimitable Schoolboy Q adlibs (“ya ya ya biiiiiiiiiitch” “DOOOPE”) and an instrumental so intense and urgent that I give it less than a week before we see it on Vine dabbing compilations. The latter is a lovelorn ode to self-medication as Brown describes “sticky-icky nugs, real furry buds” and gleefully declares that Mary Jane is the love of his life. But that’s not without earnestly explaining a series of unfortunate events that mean getting high is mandatory if you want life’s problems to temporarily disappear into smoke.

Atrocity Exhibition is glaringly reflective, confronting and experimental and nicely caps off a year that has thus far been an exciting Renaissance for rap music and a smorgasbord for rap fans (also see: Schoolboy Q’s Blank Face LP, Vince Staple’s Prima Donna EP, Kanye West’s The Life of Pablo, Princess Nokia’s 1992 or Kamaiyah’s ode to 90s gangsta rap, A Good Night In The Ghetto). Despite the album signifying Brown’s pain and self-reflection at their highest it’s still clever, comedic and energetic. Closing track ‘Hell For It’ includes the Iggy Azealia diss that 2016 compelled and when Brown was queried on it he merely stated “it rhymed.” I hope that’s the method to his madness for the majority of the tracks on the album because the reality of it all is a bit too sour to the taste.