“Cute for a while… but then it gets boring” 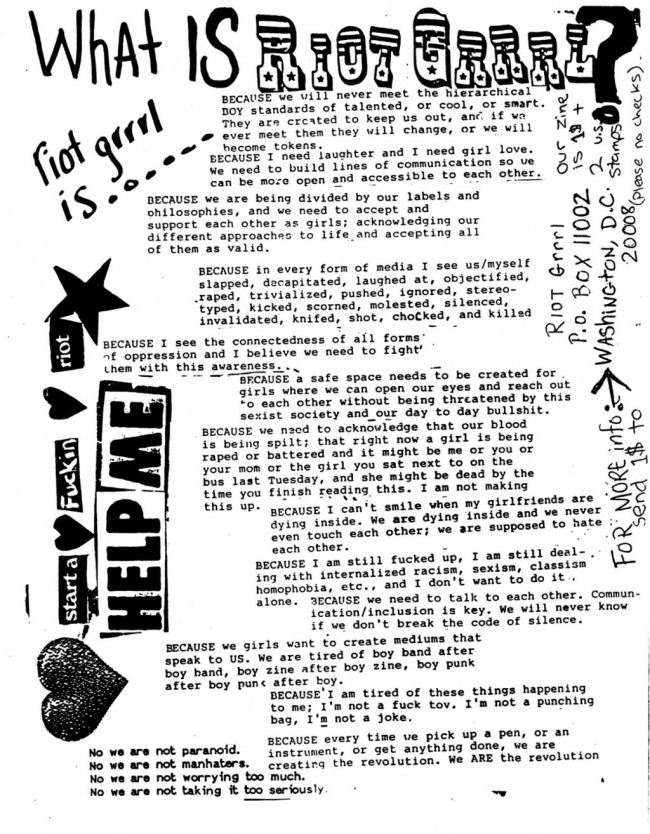 So don’t get me wrong – I am not great at guitar. When I was 13 I had about three lessons and after realising I was not some sort of prodigy I used that half-hour a week just to get out of Spanish lessons and grill my guitar teacher on why he didn’t like The Smiths. But growing up on a diet of punk and Riot Grrrl, I was under the impression that everyone followed the mantra of ‘pick-up-and-play-even-if-you’re-shit’.

In January I played a show with a ‘punk’ band (who seem to get gigs solely due to the fact that the bassist is the son of someone for The Clash, or something). They asked to use my amp, said they were excited to play with me. I got to the venue. I awkwardly said hello to them and then stood around biting my nails as they discussed which coke dealers are the best in their area. I kind of zoned out – until I heard someone say, “I think Girls In Bands is just such a gimmick”. Being, uh, a girl, and in two bands, and also standing right next to them and holding a guitar, I was obviously pretty shocked that anyone would say something like that. They all nodded in agreement. Another one said ever so thoughtfully, “Yeah when I see girls playing guitar it’s kind of cute for a while, but then it just gets boring”. It was a truly heartwarming experience when, after my set they spectacularly capitulated after a song-and-a-half and stormed off stage. Well it was cute for a while, I suppose.

Half a year on, I played a show that was reviewed by Artrocker. According to this charming ‘music journalist’, in this instance musical criticisms were secondary, pointless! Who would be silly enough to focus on music when every act at the show contained women? One comment about my lyrics and pedal set up aside, this man cut a meticulous cross section of my appearance. My shaved head (or “Sinead O’Crewcut”, as he so wittily put it) was a major feature. More important than my songs was my ‘Amazonian’ stature. Apparently it was of great urgency that people knew I was wearing a long black dress (it was actually a short black dress so even more points off for this guy). Like all good women should be, I was ‘meek’ onstage. In summation, he mused, I was comparable to the vacant, mannequin-esque women in Robert Palmer’s video for ‘Addicted To Love’.

Sadly it’s a universal truth that women and men in music are not treated equally. I’ve known this my whole life and I’ve been angry about it all the while, but luckily I’d never actually experienced it. Any guy I was in a band with saw me and treated me as their peer with just as much value as they. I’d had the odd sound guy patronise me from time to time, but other than that I had been living in a feminist, utopian bubble filled with guys (and truthfully it is mainly guys who are in the bands that I’m in, or friends with) who saw no reason to treat me as less than. This bubble of mine has now been burst.

This view that women are fair game, that their main function in life is to be examined by men, to serve the sole purpose of pleasing men, is also true in most aspects aside from music. And it’s no wonder that when things like this happen the majority of people I know in bands are guys. It makes me want to stop playing music at all, and that makes me think how many other women and girls are feeling the same thing. Music is a part of life that should be enjoyed by every gender. Don’t be a dick. Don’t ruin it for 50% of the world’s population.