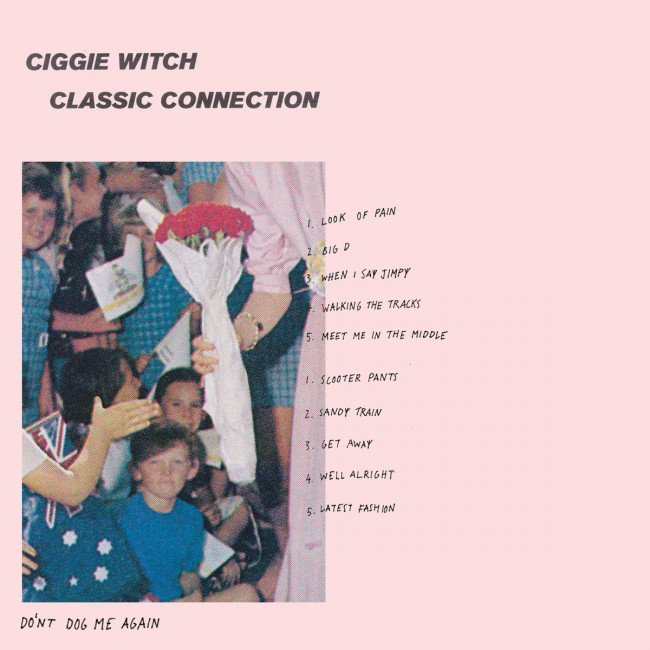 If you’re new to Ciggie Witch, Classic Connection will probably leave you feeling slightly torn. On one hand, you’ve got the Ocean Party sensibilities of the Denton brothers, with their deeper-than-most guitar pop and perpetually anxious lyrics. On the other, you’ve got Mitch Clemens, who writes these lulling guitar tunes that might make you doze on the steering wheel if you let his droll demeanour fill your ears too much. A warning about car accidents probably doesn’t sound like a great endorsement to you, but trust me on this. Classic Connection is pretty great.

I’ve been trying to decide how Ciggie Witch, as a band, fits into my understanding of Australian music at the moment. Do the band members consider this a ‘side project’ from their other gigs? Is that an outdated way to even look at music? Zach and Lachlan have The Ocean Party, Ash Bundang has Totally Mild and Zone Out, Snowy is this kind of ethereal being that touches literally everything, but how does Mitch fit in? One answer could be just “Hey, everyone loves everyone and everyone plays in bands, so whatever dude, don’t put me in a box”. But, as a ‘musical critic’, I guess it’s my job to ruin those kinds of beautiful informal connections so we can have an easily understood #OzMusicScene.

Whichever way you want to try to orient Ciggie Witch as a group, the long and short is that they play that infectious guitar pop that’s been dominating certain Australian music scenes in recent times. They also play around with what you could probably call ‘experimental’ ideas every now and again, in the form of DEDICATED lap steel playing courtesy of Joseph Foley, and some glittery keys from Bundang.

Classic Connection switches to and fro between songs from either Zach Denton or Clemens, with Lachland popping in every now and then, providing vignettes of 20-something lifestyles. Clemens comes off as way less internally distraught than Denton, singing about sleeping in his car and warming himself in the setting sun on ‘Meet Me in the Middle’ and ‘Sandy Train’.  Meanwhile, Denton’s first song on the album, ‘Look of Pain’, opens with the line “I’ve got a look of pain smeared across my face”. Not to say either approach is better than the other, they’re just different versions of personal honesty, something that Classic Connection excels in expressing.

Experience with The Ocean Party will leave you familiar with Denton’s common themes of anxiety, repetition and constant self awareness. Clemens touches on similar internal crises, but wraps it in little spots of nostalgia and calmness to let everything simmer down. Truth be told, if you’re not fully paying attention, you won’t be able to tell whether Clemens is singing about going to the beach or bottling up his feelings. His vocal delivery gives away so little.

Classic Connection benefits hugely from the amount of little details that add character to each tune: the weird synth tones on the outro of ‘Get Away’, the infectious sing along of ‘Big D’ with that little snare finisher on its chorus, the way Lachlan Denton’s drums thump massively within the mix, the huge expanse over which Foley’s lap steel glides.

It doesn’t really sound that compelling on paper, but it all adds up – and on the whole, the entire thing sounds absolutely fantastic.

Maybe that’s the best way to understand Ciggie Witch, if you’re asking “Why wouldn’t I just listen to any of the other bands they’re in?”. Maybe just listening to Classic Connection will give you a clue.