Cassette of the Week #4 – Smarty 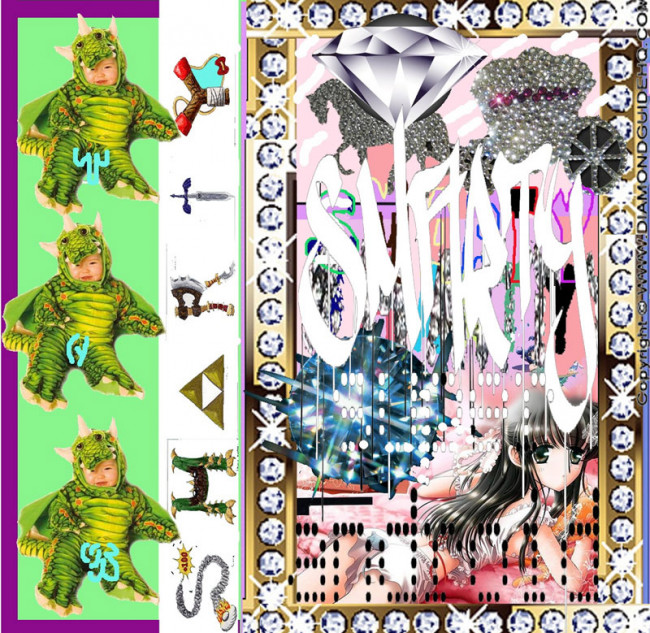 No more garage rock tapes, I said to myself. (I talk to myself a bunch. Don’t you?)

Since I invented this feature, I’ve been picking through Wuxtry’s cassette cabinet, in hopes of finding something new and exciting to write about. I gambled on two tapes that lacked descriptions – only to find mostly non-descript, “authentic” garage rock. (Yes, I’m talking about you, Dead People and Waylon Thorton and the Heavy Hands. Would it kill ya to listen to some Kraftwerk for a change?)

One tape had caught my eye for a while. The price tag read “Smarty – female hip-hop, $3.00”. The case was a prismatic blur of pixel-ish, pixie-ish icons, with diamonds blinking every which way and pastel anime chicks enticing you further. An image overload. Clearly not garage rock, in any case. Not the brash, street-smart, jazz-savvy hip-hop I had in mind, either. In fact, not even hip-hop at all.

Too disturbing for dark mornings to the gym. Incoherent, no-fi ramblings of echoing heathens. Archaic synths that squirm like tangerine glo-worms under their neurotic incantations. Consider Blanche Blanche Blanche, but remove the catchy, twisty melodies and imagine yourself back in the arcane industrial days of Throbbing Gristle. Smarty sound more like that.

Now, like other conventional hip-hop artists, Smarty do employ samples. However, we laud those folk for how well they weave that familiar (or unfamiliar) bit of readymade melody into their tune. These girls, on the other hand, could be praised for being so inept at the whole business. Fuzzy, screechy blares of chopped-up rap spike haphazardly all around “Dank Cave”; they bombard the seductive, slithering beat of “Infinity” with funk shrieks, Laibach-esque carpet bombs, and skittering machine gun fire.

“But is this tape any good, Lee?” you ask. Well, when your title track “Super Android” is a drugged-out pulp fiction vendetta about a girl who can transform into several superhuman sexy alter-egos at the words “HONEY FLASH!” – why, of course it is. Like a car-crash in slow motion, but with real people inside instead of crash dummies. Like those nasty black-and-white comix with swollen boobs and tiny, horrified men cowering underneath (you being the man). You know you should probably intervene, but it’s too mesmerizing to resist. Screw digital and all its shiny trappings, because in the end the technology will completely corrode and no one will know how the fuck to carry on, save for bed-dwelling monsters like these. And yes, that’s a compliment. Anyone who considers PiL’s “Fodderstompf” a classic needs to dig this amoeba.