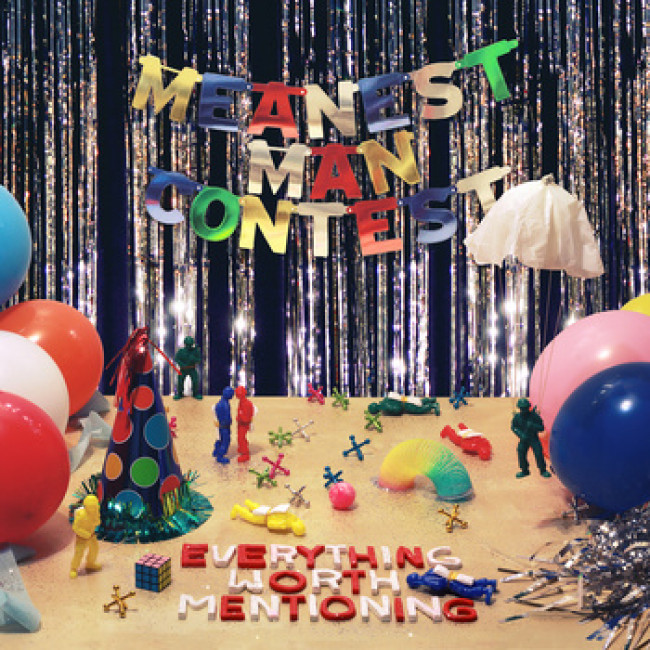 Fair warning, readers – I do not own this physical cassette yet, and thus cannot say with 100% certainty what sort of chemical reaction this will cause in your tape deck. However, my guess is that Meanest Man Contest (MMC) will command your stereo, surge into your skull, and induce involuntary head jammin’. You will pump up the bass. If riding down the street, you might roll down the window. Which, inevitably, will summon scantily clad, boombox-headed girls toward your sweet ride.

At any rate, don’t mistake this for a pure dose of hip hop. Not hardly. Rather, Everything Worth Mentioning – the tape in question, which must be a compilation of sorts – is also injected with a heady cocktail of clinical electronics, expressive vocals, and melancholy moods. Oh, so the other half’s kinda TV on the Radio, you might think. Ehhhh, yes and no. Not nearly so ambitious, not nearly the same head-expanding capacity. Although “Takitani Exit” is, quite bluntly, utterly gorgeous, with its icy piano sample and dejected lyrics.

Still, no no no. “Some People (Just Get Off By Breaking Hearts)” manages to compound light funkiness with a shower of analog engineering. “We Wouldn’t Want It Any Other Way” is a strange sort of fragile, propelled by single xylophone notes and bouncing along on a bumping boom and cushioned with hand claps. I dig strangeness, so it works for me.

The electro combo ain’t always potent. “In The Dark” is quite watery, too clean, too bright and mopey. Maybe it’s a deliberate stab at softness, but it don’t work for me. There’s too much 80s wankery here that just sounds out-of-place…

…especially when the rest of the LP is so damn addictive. “Throwing Away Broken Electronics” is pure dope, straight pulsing growling white lightning laced with weird ghostly wooziness. So is “Partially Smart”, which is about as old-school as the LP gets, but not without its wry and self-depreciating lyrics (talk about “self-aware” – “singing a song called ‘Partially Smart’, half-heartedly starting and stop when it’s over“).

What’s the sickest, illest track, though? Oy, “Sorta Sad When You See Them”. It’s fucking poetry, that trips in smoky circles and wrings out this violin sample into a distressing moan. No clean gadgetry, no fooling around here. “You can hate what we do, and still respect how we do it.”

Look, just listen to “The Tenderloin”. The whole album is compounded in the opener, a streetwise overture. Everything – the electric wizardry, the beats, the raps, the brains, the soul – everything’s packed in “The Tenderloin”, packaged and sequenced into an intoxicating synthetic meat product. And trust me, that IS a compliment.

Anyway, this is perhaps longer than I expected this review to be, so let’s summarize – Everything Worth Mentioning is one fine fusion, one not so hopelessly muddled that the lines fade and the music loses shape (that phenomenon of “genre-bending” which does progress the art, but can sacrifice any distinguishable landmarks, and ultimately bleed into each other). You can tell what you’re chewing here. And you’ll be begging for seconds after the first bite.