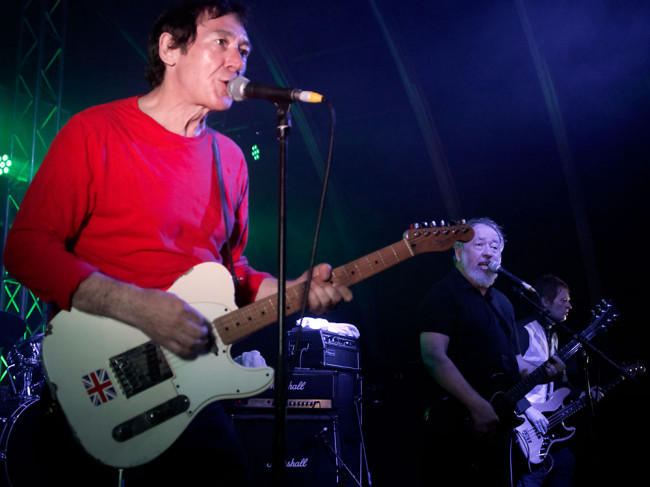 In the late 1970’s, Buzzcocks, starting with the Spiral Scratch EP, released a series of singles that is nearly unmatched in quality and timelessness in the punk rock canon. Since their reunion over 25 years ago, they have steadily amassed a huge amount of live performances along with the occasional new album.  There is an unmistakable sense of excitement at the Triffid as many generations of punk rock fans are gathered to see Buzzcocks deliver their catalogue of timeless pop songs. The big question is whether they still carry the same energy and passion after all the years and line-up changes.

The opening act, HITS, an explosive 5-piece rock act from Brisbane, power through a blistering set, despite some resistance from a few elder traditional punks in the crowd. Frontman Evil Dick readily delivers stage banter throughout the set and at one point has to disarm one particular heckler who calls him a ‘fucking asshole’ in addition to criticising their songs for being too long.  As he courses around the stage, beer in one hand and sunnies on, his loose, uninhibited stage presence bringing to mind a livelier Mark E. Smith.  Their set is bursting with energy and great song-writing, perfecting their own type of drunken garage-rock. It’s hard to not be captivated by the driving 70’s rock riffs and controlled chaos of HITS in a live setting. It’s an exciting and unpredictable performance and a perfect set-up for the oncoming main act.

After a short delay, Buzzcocks waltz onstage to rapturous applause and a short acknowledgement of the crowd before kicking off with the Spiral Scratch-era classic, ‘Boredom’. The band proceed to tear through their setlist at breakneck speed, with never more than a 10 second break between songs. All the typical fan favourites are covered in what was virtually a retrospective of their long career. Despite guitarist Steve Diggle’s on-stage theatrics (usually consisting of him raising his guitar over the audience), the band seem to slip into a lower gear for many of the proceeding tracks. Playing a similar setlist for decades must have that effect, but there is something a little disheartening about the lack of character in Steve Shelley’s voice and the unremarkable rhythm section. However, the highlights, like the 6-minute epic ‘Why Can’t I Touch It?’ followed by ‘I Don’t Mind’ are played with a passion and intensity that give a glimpse of Buzzcocks at their best.

It’s all over in a flash with 20+ songs, powered through in just over an hour.  The setlist is sure to please long-time fans, with a run-through of most of their early classics interspersed with the occasional recent single. Overall, though, it’s a serviceable, yet not overly inspiring, performance by one of the greatest punk-pop bands of their era.