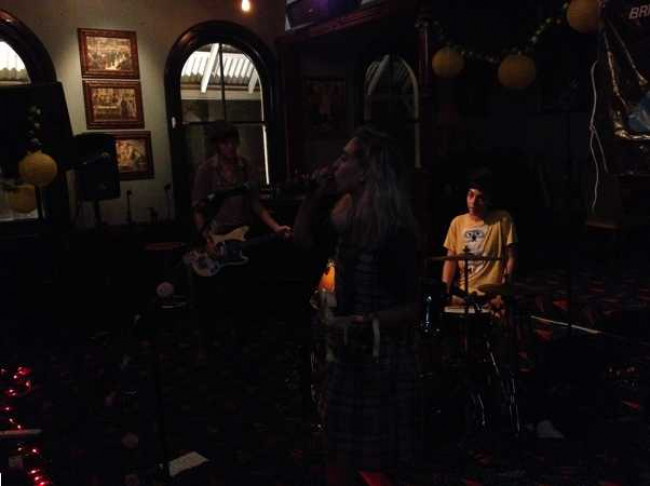 This is part of Happyfest, a fundraiser for 4ZZZ. 4ZZZ is a Brisbane institution, a community radio station that served as a focal point for dissent during the Joh Bjelke-Petersen years. The fact it’s taken me seven years to make contact – I finally performed live on Matt Kennedy’s show on Wednesday as part of BLMW15 – goes some way towards explaining the dislocation I feel with the city. Many of these people are my people (roughly), but I don’t know them.

Maybe that means they’re not my people. Whatever.

California Girls and Raus drive down from Canberra to be here tonight: homemade electronica, sporadically engaging. Drum machine loops and oscillating keyboards and hypnotic refrains… I’m sure you’ve been there. Makes one wonder why they ain’t down the dance club cross the street, warping and bending expectations. California Girls aren’t too well-named, frankly. I’ve heard too many tortured tuneless vocals matched melancholy electropop (the shadow of New Order still falls long and wide). When he’s good, he recalls Tasmania’s Native Cats. This only happens sometimes. Here’s the music.

The dude from Raus I appreciate: he exhibits a wired, frenzied intensity shaking his arms and bowing his head, shuffling a quick one-step, as around him keyboards implode and shudder in a timeframe of mutant dislocation. You know he feels it, and that counts for much. The first song he sings (the rest is instrumental) and he sings deep and low and sonorous like an Aussie raised on too much Bauhaus (a band who split before he was born: a band I doubt he’s heard) or Interpol and it makes me smile because it’s special, all these squiggles and loops and sudden sparkled detonations of sound, and it also reminds me of Jed Smith’s Syster Darkwyne project.

Now I’m getting super obscure: it’s like a Venn Diagram of obscurity. Talk about band A that only maybe 100 people know, then compare them to band B that even less know and then see if anything collides whatsoever.

Wait a second, I’d like to reproduce my last Wet Dog review (from 2009) in full.

Currently Australia’s finest underground band? Man, fucking hypemongers at The Guardian need to know when to shut the fuck up.

Wait a second, let’s have some Salt N’ Pepa. Let’s talk about sex baby. I already knew Bent were Brisbane’s sexiest band before I knew who they were. No use denyin’, be falsifyin’. Tonight doesn’t change that status. Kinda band makes me want to clamber on stage with them and do a version of Liz Phair’s ‘Flower’ accompanied by scouring violin just to lay open my vulnerability. Man, wouldn’t that be sweet if I lived in the kinda world where that could happen? Ah well. Can but dream.

Go check the goddamn album out.