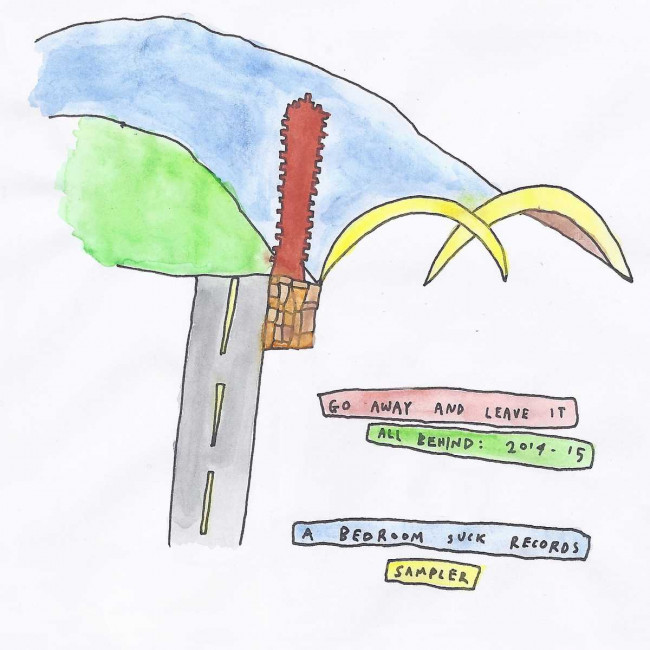 Go Away and Leave it all Behind : 2014/15 is a new (free) sampler from Brisbane-incepted indie label Bedroom Suck Records. The name invokes the will to get out there in the night and have a good time seeing bands or mates’ bands instead of staying in. Commendable enough, but the songs on display here are generally pale imitations of good bands or pale imitations of pale imitations. The good news is these kids aren’t tooling around playing computer games. The bad news is these kids are into music and aren’t more into Starcraft or whatever it is.

Lower Plenty must be massive fans of David Kilgour of The Clean because their track ‘On The Beach’ sounds like a Kilgour outtake. A nice enough acoustic ditty about the wonders of the beach. Another (kiwi) band Surf City are also massively into ripping off The Clean so it is a common thing these days especially when you lump in all the Melbourne ‘dolewave’ bands like Twerps and Dick Diver who seem unaware that what made early Flying Nun bands notable was the fact that they were good songwriters who didn’t sound like each other. Did Ramones sound anything like Television or Patti Smith Group or Richard Hell? The Chills sounded nothing like The Gordons or The Verlaines or The Clean, and never the twain. See, the bar is always in the raised position and the limbo won’t cut it.

Totally Mild‘s song ‘Christa’ barely makes it out of the blocks with a two-chord echoey twang a la Chris Isaak. This song sounds like the desert/outback at night. The vocal is high and pure pitched somewhere between Hope Sandoval and Joan Baez. The sound is quite radio-friendly but the song wafts by without leaving an impression.

Terrible Truths‘ track ‘Lift Weights’ is echo-ridden post-punk surf rock. He sings, ‘Don’t want to be a dead weight in the water” over and over again. [She sings, surely – Ed] The guitar riff nags and the whole track seems a bit undercooked and whiny like a lot of tartan scarf-wearing floppy-fringed 80s post-punk which is all the rage nowadays.

Martyr Privates‘ entry is called ‘Sores’. Sorta like Puss right – maybe they’re Jesus Lizard fans. They have a bit of swagger and the vocalist has a Liam Gallagher pissed-off air about him. They actually sound a lot like the almost famous Mancunian pre-Oasis outfit Molly Halfhead who had a good tune or three. The song starts with a drone wave pounding out one riff over and over, similar to kiwi noiseniks Bailter Space.

Fair Maiden wrote a paean to India called ‘India’. There is a cool percussive background noise that sounds like the work of Martin Hannet of Joy Division fame. The female vocal is eerie and haunting, in love with the allure of eastern mysticism. A more obvious take on The Stooges’ ‘We Will Fall’.

Blank Realm‘s hypnotic sick-sounding ‘Digging Up My Bones’ is vocally super-similar to Jennifer Herrema of Royal Trux. The Kills’ Alison Mosshart has made a lucrative a career out of ripping off Herrema’s stylings in a more radio friendly less guttural way. Blank Realm could be the perfect Kills support band (in the eyes of a promoter) but they need to find their own thing.

Wth ‘Eyes’, Love Of Diagrams have ditched lo- fi shambling and replaced it with a driving psychedelic number that has an alright semi impassioned Belinda Butcher vocal. It goes on a bit though. It’s hazy with lots of reverb and a bit dreary and plaintive sounding. Not high on originality or bucking any trends from the UK.

The track from Primitive Motion has the Belinda Butcher vocal again – fey and floaty. What saves it is the brevity and the nice chintzy organ part that sounds like the wonderful Young Marble Gaints from back in the day.

Next up are the modestly named Superstar. The kids have gotta learn to write some bloody hooks instead just wafting along in some sorta ethereal happy daze. I imagine some people feel this happy when they are coming down off drugs at the beach at dawn watching the sunrise while dolphins make love. Wouldn’t that be nice!

Leighton Craig‘s entry sounds like a cheesy funeral home organ number. Parents might want to save money and cancel their kids’ piano lessons after hearing this.

Circular Keys sound like a girl singing a requiem in St Paul’s Cathedral for a dead friend. It’s a bit grim really. Some people might find it beautiful but church has always bored me to tears.