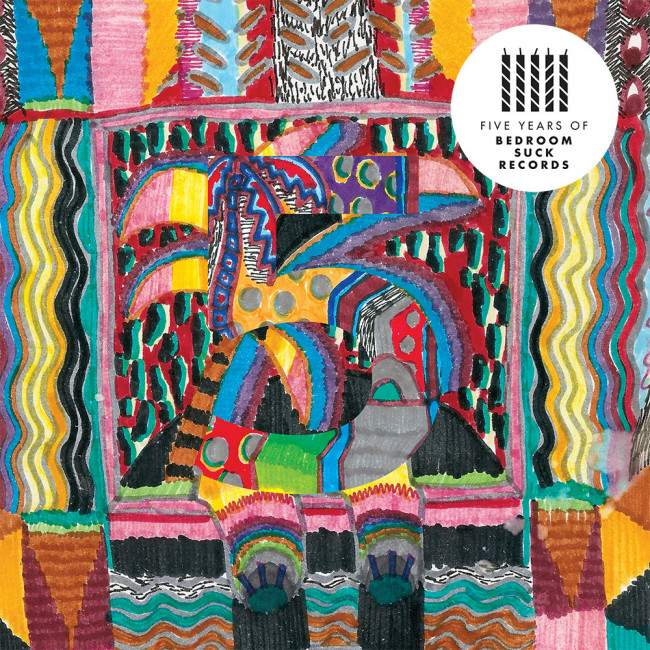 There’s a Bedroom Suck compilation out: BSR5. It’s there to celebrate five years since the label was started by two discontents living in the steamy undergrowth of Brisbane, 27 tracks featuring… well, I’m guessing it features some fucking great Australian music. (I ain’t heard it, you understand.) Not much of a guess really, considering how closely Collapse Board has been aligned with Bedroom Suck since its inception. I mean, we don’t make a song and dance about stuff like this, and neither do they, but this label fucking ROCKS. We’ve covered a whole bunch of their shit: not cos of any record label shenanigans or out of a sense of duty, but because this is some of the greatest shit happening anywhere.

Let’s have a recap. (Find the lowdown on the label’s releases here.) There’s a lot more, but I wanted to shove this post up today, not next year.

This new split seven-inch between Hissey Miyake and Terrible Truths (on Bedroom Suck) is one of the singles of the year. I can’t resist strange rhythmical music. Cannot resist it. Everything is jagged. Everyone is aware. Everyone throws weird goblin-like shapes on the office wall and slurps around kissing and hissing and making extravagant, succulent claims on attention. (Everett True: Song of the day – 494: Hissey Miyake)

This new split seven-inch between Terrible Truths and Hissey Miyake (on Bedroom Suck) is one of the singles of the year. I can’t resist rhythmically strange music. Cannot resist it. Everything is barbed. Everyone is heightened. Everyone throws surly dragon shapes on the bedroom wall and lumbers around roaring and scoring and making lavish, juicy claims on attention. (Everett True: Song of the day – 495: Terrible Truths)

It reminds me of someone in a book I once read, describing a heroin high as like floating on a sea of jewels, which scares the hell out of me because it sounds incredible. (Ben Green: Primitive Motion – Home Of The Future (Kindling))

As good as that last segment of block singing (or whatever that weird early 20th Century church choral device is called) you heard in a dream. Yes, it’s a cappella (with drones attached). Yes, it also sounds like the finest drone stoner psych pop you’ve heard in 2014. (The return of Everett True | 29. Ela Stiles)

What is ‘Ela Stiles’? Fleeting beauty, sunlight through a dense canopy. And the breathless darkness wrapping around you as the shards of illumination slip further out of reach. It is an artefact, as if uncovered by accident. (Tom Randall: Ela Stiles – Ela Stiles (Bedroom Suck))

With its impromptu gargling and glugging, ‘Goldfish’ is a classic of its kind. (Everett True: Song of the day – 442: Clag (something wonderful from the 90s))

Go Easy is a radical jukebox. Go Easy is lying in your backyard, stoned in the sun. Go Easy is a top-down ride down a wide avenue with tall palm trees on either side. (Ben Green: Blank Realm – Go Easy (Fire))

I’ve written about Blank Realm extensively elsewhere, but oddly can’t find a Song of the Day on Collapse Board. Leave it to Ben…

Blank Realm sound great in a relatively big place like this, booming (Dan Spencer WAILED on the drums) and epic (Luke Walsh seriously WAILED, as ever, on flaming lead psych-guitar) and neon (Sarah wailin’ again on the keys), justifying the ROCK side of the experimental-/psych-/etc- hybrid genre tags that get hung on them. (Ben Green: Deerhunter + Blank Realm @ The Zoo, Brisbane 09.12.13)

That narrative in the music press (the music press love a narrative) in which Blank Realm emerge four-legged from the murky deep and wriggle their gills in the fresh air of rock n roll? It’s true, to an extent. (Ben Green: Album Review: Blank Realm – Grassed Inn (Fire/Bedroom Suck))

Beautifully laconic awkward pop from Adelaide: all crushed violet and failed romantic leanings. Guitars jangle morosely but so plaintively. It’s like a whole world grew up defined by loneliness and The Velvet Underground and the comfort of hoodies and Dunedin ’85: suburbia – so little to answer for. (Everett True: Song of the day – 635: Bitch Prefect)

I might tell you that I’m in love with Peter Escott, but that’s not true. I don’t know the man, only the “user-friendly” electronics he’s jiggered on The Native Cats and his voice, a channel for summoning deep-seated fears and passions. (Lee Adcock: Peter Escott – The Long O (Bedroom Suck))

A haunting tale of breakup and breakdown set against a depressing Australia landscape. Cathartic. (22 of Darragh Murray’s favourite songs of 2012 so far)

It’s The Velvet Underground. It’s empty beer cans crunched up on your shared driveway on a Sunday morning. It’s the sound of crickets chirping unmercifully all summer long. It’s falling off the top of the secondhand ute cos no one told the driver you were up there surfing. It’s sticky carpets and mouldy, festering ice trays. It’s hope and solace and one-string guitar solos and failed relationships. It’s personal consumption. It’s none of that, and more besides. Scuzzy sofas. Derelict road blocks. Useless wasteland. Useless lists. Useless useless. The Clean, of course. (What isn’t The Clean in Australia 2012?) (Everett True: Song of the day – 541: Scott & Charlene’s Wedding)

Woozy and wrong and curdling and like all those fucktards quoting David Lynch movies have gone back home to their collection of Gotye outtakes and left the real losers, the real outsiders to grab the mic and shades and make sinuous, sensuous torch music. (Everett True: stuff you probably shouldn’t include in your press release)

It’s been pointed out to me by someone half my age that Kitchen’s Floor sound/move like the Pixies/Nirvana axis – I don’t see that. I see two boys and girl thrashing furiously, and trying to make sense of surroundings (damp mattresses, uncaring peers, blurred vision). I hear a drum that clatters, vocals that are indecipherable yet cut deep the way I recall vocals from forgotten Olympia WA bands in the 80s cutting deep. I hear cow bells and distortion and fuzz the way I was once unable to describe Cows. I hear vocals that grate and guitars that warm. AND I AM UNABLE TO SEPARATE THE TALE FROM THE ARTIST. Does this make me a dreadful critic, or simply one that chooses to believe in the truth/illusion? (Everett True: Song of the day – 49: Kitchen’s Floor)

KF embodies the experience of most people in their early to mid-twenties. ‘Regrets’ sounds drunk and unfocused, well-read yet barely articulate, profoundly furious and desperately in need of a map. There’s something very early 90s in the way the album straddles the line between fighting to the death and walking away. Barlow, Cobain, Westerburg, et al would be very proud. (Scott Creney: Kitchen’s Floor – Look Forward To Nothing (Siltbreeze))

All this sullen beauty. Here’s what we did instead of listening to Matt Kennedy’s torn, shredded tales of deceit and hedonism, shaken into existence via a battered acoustic and an even more battered, terrified rhythm section: wrote out a list of Isaac’s spelling words twice. (Everett True: Clag + Kitchen’s Floor + Scraps @ Brisbane Powerhouse, 22.07.12)

It sometimes, momentarily, gloriously felt like standing to one side alone in a fogged-off Euro disco circa 1983 while everyone around you showed their form and you grabbed another bottle. (Everett True: Clag + Kitchen’s Floor + Scraps @ Brisbane Powerhouse, 22.07.12)

I can only imagine what this plaintive, personal, playful music would feel like in the company of some drunk people and little ventilation. (Everett True: Song of the day – 443: Scraps)

I love the 80s as interpreted by the Australian underground, too. (Everett True: Song of the day – 491: Slug Guts)

Over the course of this year Knee Chin have come from being a loose houseshow band into an incredibly great weirdo pop band that can take on the world. (Matt Kennedy: Eternal Soundcheck is one year old)

There’s a five-year Bedroom Suck concert happening too, in Brisbane this weekend. Like, this blog entry will convince anyone else to come down – I can’t get The Guardian or Pitchfork to even return my calls on this one. That’s fine though. The underground abides. The underground is the underground for a reason. (Is it? What would that reason be?) It’s this Sunday night. I’m psyched. I just fucking hope my energy last long enough for me to catch Terrible Truths at 11.30 or later. (Again with the late set times on a Sunday evening! Enough already.)

Joe Alexander, the lovely fellow who co-runs the label, sent Collapse Board over a track to embed. We very rarely do this – I believe Ashley Eriksson might have been the last one – but the insistence of a handful of people (Street Eaters) on taking Collapse Board as a serious force to be reckoned with is touching. Whatever. This one’s from the forthcoming (March 2015) Primitive Motion album Pulsating Time Fibre, and it’s called ‘Bodies Of The Placid Furnace’.

Here’s what I’ve said about Primitive Motion in the past:

This is everything I once loved about UK bedroom electronic circa 1980 – and, trust me, I loved plenty about UK bedroom electronic circa 1980: loops and grace and repetition and gentle hummable melodies and drum machines and layered vocals and frantic but never jarring beats. So smooth, so soothing, so head and shoulders above most anyone else operating in similar territory right now. (Seven From Brisbane: Sky Needle, Cannon, Primitive Motion)

One Response to Bedroom Suck doesn’t | five years on