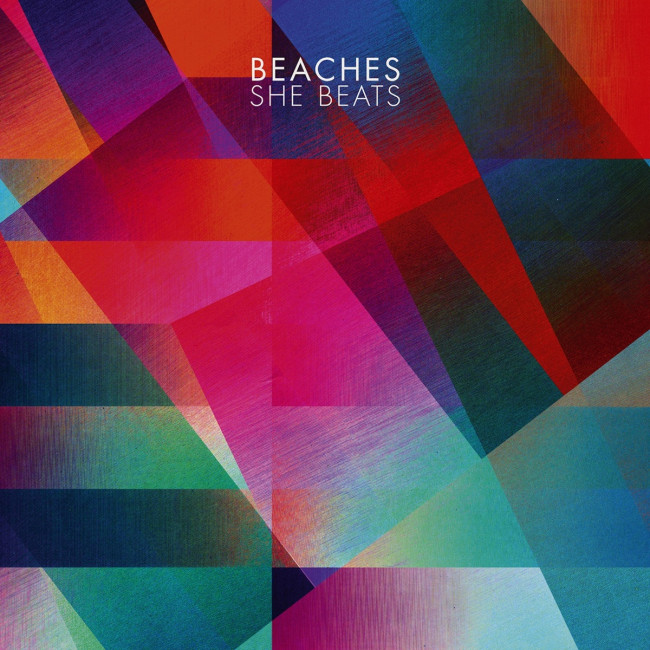 It’s been five years since the last Beaches album. I don’t know how many people in America own a Beaches T-shirt, but I’m one of them — and not just because I’m a massive Bette Midler fan either. Maybe it’s their band name, since overtaken by all kinds of beach-like variants, like buying a secluded house in the country only to find yourself five years later surrounded by all these cheap new subdivisions. Maybe it’s because there’s a vagueness, a lack of distinct personality at the heart of their music, that makes it easy to overlook them.

All of this is to say that it ain’t easy being Beaches.

She Beats as in female Kerouacs, as in self-pleasure, as in girl music, as in the extended e’s that sound like the hissing of steam.

It’s a cool cover, but I’ve seen that font/design somewhere recently (I don’t feel like spending the next hour trying to figure out where. Will someone just tell me in the comments? — thanks), and it’s kind of fitting in the way that all of Beaches’ best moments echo somebody else’s moments. Don’t get me wrong: this isn’t just some half-assed retro retread, but it isn’t much more than that.

Or to put it another way, Beaches makes itself easy to dismiss. And that’s disheartening because… well because no artist should ever do that. You’ve been given 40 minutes to say/do whatever you want. You have an opportunity to change the world. Say something. Say anything. Throw every inch of your intelligence into the record and see what sticks. Prove yourself to be the unique beautiful snowflake all your kindergarten teachers said you were.

They’re too good to dismiss, but they take way too few risks to leave me stunned, too few to ever fail, to leave themselves open to embarrassment. This is well-done, solid, enjoyable circa-1991 rock music performed better than most bands who do this kind of thing. When the group locks into a moment like the instrumental ‘The Good Comet Returns’, or the extended Krauty/Stereolab-ish middle section of ‘Distance’ (featuring Neu!’s Michael Rother), they nearly go Technicolor.

If you’re into this kind of thing, there’s no way you won’t enjoy this album — but it’s equally unlikely Beaches is going to be your new favorite band.

The group tears into the chorus of ‘Send Them Away’ with a strength and abandon that a band like, say, Ride never really mustered. Finding themselves at last with a great pop chord progression to get behind, the band charge off into a song that can hold its own on any dreampop/shoegaze comp you might want to compile. And the video is magnificent.

One could argue that if Pitchfork gave the recent Ride reissues Best New Music, shouldn’t Beaches get like an 11? (It got a 7.2.)

Beaches write decent songs with memorable hooks and all that, but they don’t write great songs — nothing that gets under your skin and makes you want to hear it over and over. It doesn’t make my blood pump any faster. I’m glad this album exists; I genuinely like it. But while it’s better than 95% of stuff out there, I feel compelled to point out that the best song on She Beats still can’t hold its own with the worst song on the similar-sounding Yo La Tengo’s Painful.

So it’s a perfectly good, totally unannoying album that does its job capably. Within the context of music — not just Australian, not just its own narrow genre — it’s head and shoulders above all kinds of lesser lights. But within the context of life, or even art, it’s way too pinched and predictable to get all hot and bothered about. Nobody will ever want to grab you by the shirt and shake you into admitting the brilliance and passion of Beaches. That’s no reason to hate them, or even ignore them, but keep that in mind when you’re listening.

Beaches have chosen to exist as a small, heavily populated planet in a universe of infinite possibilities and sounds. And that is never a cause for celebration.

One Response to Beaches – She Beats (Chapter Music)