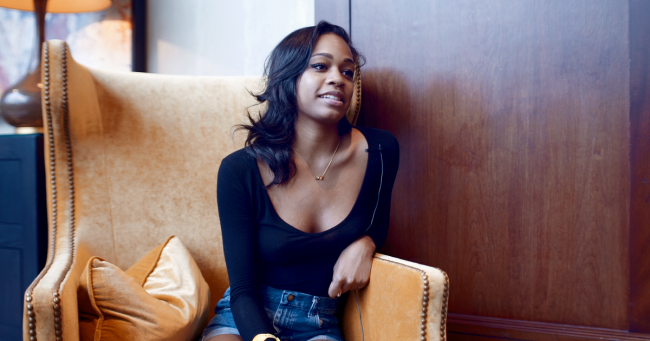 I can measure a year’s worth by the number of diaries I’ve filled. The number of times I’ve felt my head expand, or met new people, or brushed the cusp of a new horizon…all these urges to write, to organize thoughts and record the impressions of that moment, all this charts growth. I’ve kept three diaries this year – the tail end of last year’s, six months in another, and now this one from the American Museum of Natural History with a lovely crab on the front. I’ve only had it for about nine weeks, and already I’m a few pages away from the back. This year has been a great one, and it unravels still.

You may have noticed that I haven’t been posting as often here as I did in 2014. That’s not because music – its creators, their creations, and all that follows from them – has loosened its grip on me. Drowned in Sound has certainly embraced me in their fold, but that’s not the reason, either. Life is moving forward, but backward too. I can see my former me, who wanted nothing more than a night in with a small adventuring party for D&D I see myself today, darting through the underbelly of the museum with my bag of linens on my shoulder; and I see my future me, listening and writing in an endless upward funnel. They’re together, in one room now, sharing pizza and swapping stories. This is good, really. A year ago, I only saw the funnel. Backwards is a forwards too, if you tilt your head far enough.

Like last year and the year before, this list depicts how I’ve moved through this year, what memories have lingered with the albums. There will be no Beach House, no Viet Cong, no Father Fucking John Misty. They are too far removed from life, and particularly my life, for me to even consider them.

In my halfway round-up, I hailed this holy infection and its impeding rhythm, chug-a-chugging me into oblivion. Six months on, and I’ve learned much about the now defunct cult of A Middle Sex. Before, I could scarcely imagine the human forms behind such almighty miasma, such seeping glory that surrounded me as a physical presence. Now I have not only spoken with the man who engineered such sonic architecture, but I have the interview recorded and preserved in Mixcloud’s hallowed halls for yr listening pleasure. Fewer conversations have left me so thrilled, or so enthused about creation, or so devoted to the faith that humanity is intrinsically good. You can peek in here, if you wish. Or you can just ensconce yourself in this fleet-footed fury and be bowled over in awe.

This was the first record I reviewed for Drowned in Sound. That’s akin to asking an acolyte alchemist to create gold. With each listen I dove deep into an inky black well, and – wait. Have I told this story before? Ah, well. Six months on, and GNOD still devour me. They’re great for long road trips, too.

Correct. Half a year later, and Steve Spacek still entices me, like the secret affair I’ll never have. Mmm. Hmm. I should work on that.

I’ve just moved into my new apartment. It’s in this wooded enclave set back from the road, within one of those suburban forests that dot Atlanta. The good people around me leave by 7 in the morning, just as I trot out to the tiny fitness room behind the main office. Me, I don’t have a job yet, but I’ve filled out reams of paperwork and sat through two narrated Powerpoint presentations to ensure my passage into the CDC. And, according to the woman from the contracting company that lured me here in the first place, I must fill out even more forms to satiate the background checkers. In this state – lonely and yearning, perched on a precipice and waiting for the signal to jump – I have to review this wondrous book of odes, which open with the memoirs of a man lost to the world. I think of him, I think of this job and what it will rob from my life, and John’s beautiful voice nearly swallows me in grief.

Oftentimes, the albums I spin the most are the ones I can dance to. No ordinary chart-topping pop record will do – it’s gotta beat like the heart in my chest, or fit like skin on my hands, or wash me in such ecstasy that would banish all shame from my being. Seven’s “Wild Hearts” single set me aflame earlier in the year, and worked me into a slobbering frenzy for more. Several sneak peaks later, the man descends and delivers a cosmic funk house journey that still jerks me to my feet, again and again and again. There’s a particular thrill in jiving to “Everybody Too Cool”, a jam all about how stuck-up hipsters dare not cut loose in the club anymore. We, with the moving bodies, we embody the sublime happiness in humanity that the space traveller of Universes seeks, and Seven rejoices in our rejoicing. And man, does that feel good.

Another to file under “albums I dance to”. But ABRA imbues me with something else – that rare sense that I could seduce, or entice, or enchant with womanly graces that I’d long exhumed from my body. The neon rave blots that darken the album only empower me further. ABRA is the Atlanta I haven’t yet explored, the other nightlife that Athens could never share. That’ll have to change.

I’m about to endorse two Odd Box releases. No shame. They both must be inscribed here, as ying and yang, fire and water, sugar and cream (OK, not all of us take both in our coffee – but I do).

The first are the flames, that dance as they subsume whatever old and fragile structures might block their path. ”Don’t bring your dick to the razor party,”, they warn with sparks in their eyes, blades in their hearts, springs on their feet. EDS remind us why punk ever existed at all, and why it should persist in the hands and voices of those that need to punch and shout.

The second is the water, cupped in your hands, cool and clean and pure. From no one else have I heard the word “resilience” shine, like a silver sword pointed at the sun. Roxie lives in the same world as I, though we live an ocean apart – in the private confines of the mind, where thought is as precious and fleeting as gold dust, and where bound diaries contain more of our lives than all the social networks combined. Indeed, I wrote in my journal once with Two White Cranes in the background, and I felt like we were sharing pages – which we’d never do, because we’d both guard them with our lives. But thus we were, because Roxie wouldn’t tell a soul, and neither would I.

AHHHHHHH! How else to convey the joy that is Blank Realm without hands in the air, gesturing wildly, without jumping and smiling and blushing and your tongue tripping until the only words that you can utter are “God, I love them”? How else, indeed, to express anything short of love for a family band (and their spiritual brother) that exalts Romance (yes, with a capital R) for the sake of a sigh, that exalts rock and roll with the wide-eyed wonder of a dream-struck poet, that exalts exalting over all else? Please tell me how. Words still fail me.

My nutshell description for this one is “a feminist Van Hagar” – which sounds derivative, but believe me, it’s not. Teri Gender Bender kicks so much ass. If, like me, you fell out of love with classic rock and their misogynist ways long ago, this one will restore yr faith in the power of riffs and heavy-handed synths. Plus, I still have no idea what “Oil The Shoe If The Critter Knew Any Better” is about, which can only be good.

So I helped out with this Dead Albatross awards thing, an alternative to the Mercury Prize that no one has to buy their way into. For nearly two months, I welcomed 25 albums into my life, weighing each against each other as I fixed suppers, drove across town, worked out in the cramped fitness room of my apartment complex, and eventually steamed linens for my new job in the museum. A Middle Sex were elected in, and they topped my list, but I should have known better. I should have known, that such a voice as this – otherworldly, but not without very earthly desire – paired with such specters as these – violins stranded in a black-and-white love story, doomed forever to glide by lovers that exchange only a glance – would shake everyone’s heart as violently as mine.

And if you’re keeping track at home, err, yes, that’s three from Ninja Tune. Erp. Well. No apologies, once again.

But. Hot on Annabel’s heels was this beast. A dip into All Tense Now Lax is like a stroll in a labyrinth, where magicks older than the earth itself coarse through the walls, and buzzsaws grind through the floors. And you shouldn’t stroll there, you mustn’t, but the calm voice lures you to the center – the voice, the woman that feels none of the terror and chaos clamoring around her. You want to reach her. Why you desire this escapes you, but you’ll brave the whirring, pulsing flurry for just one touch.

Last one from the Dead Albatross line-up, I swear. Given my predilection for graveyards and fiendish noises, though, I suspect Cathode Ray Eyes would’ve found me sooner than later. Imagine something like Death in June possessing Love and Rockets – or, try to imagine, whilst you retain some shred of sanity before the horror comes to you and mars your sight with visions of what shouldn’t be. I still lose it every time “When There Is No Beginning, Middle or End” rises up from the earth, shrieking for blood.

Mbongwana Star – From Kinshasa To The Moon (World Circuit)

I was late to the bandwagon on this one. Didn’t take much to win me over, though. Ponderous cavern production over trickling Congolese rhythms, and wild ululations more fiery than the loudest whimper that most sad white dudes could ever muster? Hell yes.

So we reach the end. Indeed, I’ve added “diary” to my shopping list. Graduate school groomed our class for a career in spinning words; everyone landed a prime spot in health writing except me. Don’t think I resent this. I am exactly where I need to be. I will live as the black sheep, live in the gap that my learning failed to bridge. And meanwhile, you can trace my arc in the music I send your way. Catch you on the flip side, eh?