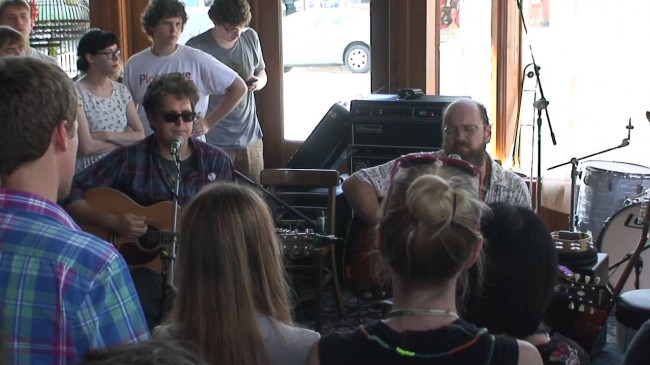 John Ferguson (left) and Robert Schneider (right) serenade the crowd in Spaceflyte. The above screen grab and all videos shot by Jason Selpie.

Wednesday, August 10, 2016
T-shirt for the day: Tunabunny tee circa Genius Fatigue, hot pink on lime green. Acquired after the first gig I ever saw in Athens. Symbolic, much?

I can never understand myself. Here I am at last, in Athens’ coziest neighborhood bar, sitting next to people I knew and loved, and I am clutching my guidebook with a knot in my tongue.

Driving into Athens still excites me, even a year after I moved out to the ATL. The butterflies kick in well before I’m even downtown, usually right around the inner loop. It’s also a sense of supreme familiarity – I could turn here at Prince, or I could drive further down to Chase. Likewise, in Little Kings, I enter and can count at least five people that I could sit and talk to, including both guys handing out the tickets and tote bags. One day, I hope, Atlanta will open its arms to me in this way. But for now, for the next four days, Athens shall embrace me, and I will embrace her back.

It’s Popfest time, by the by. Did I mention that? I didn’t. Well then. Now you know. After a five year absence – well before I’d ever hit the scene – the town’s biggest and happiest party for misfits would finally return. I’d been anticipating this day for well over half a year; Mike Turner, who plotted, booked, funded, toiled, and willed the thing into existence, had been hacking away at it since last summer. As he himself said, this wasn’t supposed to happen. The fact that folks inquired about it at an indie festival in the UK should attest to its infamy.

But back to Little Kings. The guidebook I am clutching at the bar looks and feels like a tidy street press zine, complete with Andy Hart’s comic book sketches of the headliners. There’s even words from some of my favorite writers in there: Scott Creney, Will Fitzpatrick, Joseph Kyle, and heeeeey, there’s Erika Elizabeth, and – wow! – here’s Everett True, with a bio for long-time friend Daniel Johnston. I’m in there, too, and I’m going to do my best not to brag about this the entire time. Still, sitting here as I am with 2/3 of Hunger Anthem (and the drummer’s girlfriend), I can’t help but point these things out. Go figure.

I’d like to tell you that the first band affirms my presence and untied my tongue, but Mythical Motors are the most middling band of the evening. Devotees of the REM school of riffs, they nevertheless know all the good tricks that rock bands should know, like Shangri-La drum beats and churning chiming chords. Highlights include watching the drummer (he was good at the dramatic pause, with the sticks suspended in the air) and moment when the lead singer pulls out his broken toy Indian tambourine for, well, “Broken Toy Indian Tambourine”.

No, it takes the second band, Asheville’s delightful Minorcan, to lift me out of my default state of crippling anxiety. (What is a Minorcan, Jesse Stinnard asked before the set. I googled and concluded that a Minorcan is a resident of the Greek island, Minorca.) Frontman Ryan is this gangling, towering guy with Tom Petty hair, and he jumps, swings, shimmies, and revels in our delight. We adore him, and he adores us. In his finest moment – which even surpasses the donning of the bear mask – Ryan leaps off the stage during what should be his solo in “Better Half-less” and turns the guitar to us. Gleefully, we claw and stroke the strings, until I invent the perfect ending for our collective session. That, ladies and gents, is the instant that the magic hit me, the moment that I understand Ryan’s visible giddiness when he hails to us later, “Happy Popfest, everyone!”

Now the juices flow. Now I can, with confidence, hail total strangers, like the lady next to me who had grabbed one of the set lists. “I could take a picture of it for you, if you like,” she said. Nah, I reply, I don’t work that way, but thanks for the offer. Come to find out, she’s covering the Popfest too, for a blog in Minneapolis called We Heart Music. She’s just a year into the music-writing scheme – oh! To be young again! To be a novice in a craft that excels in the hands of amateurs! Sometimes I miss it, being new. But I’m also glad I’m beyond the point where my only tools to distinguish myself are metaphors and choice adjectives. I do as I do to every budding author/music fan I meet – here, there’s this place called Collapse Board…

If I seem spiteful by largely skipping Hunger Anthem, do forgive me – not that Brendan and his crew don’t impress with their, well, anthems. They surely do, and especially with Jesse’s bubbly actions and backing vocals as a foil to Brendan’s flannel and throaty, salty bellow.

No, I am skipping Hunger Anthem, because I expect such solid fuzz from ’em, and am more pleasantly surprised by Spaceflyte, a new supergroup from Robert Schneider of Apples in Stereo. To start with, a lady with a box first poked around in the crowd during Hunger Anthem’s set and asked me what size t-shirt I wore, then handed me a green Apples in Stereo tee. “Robert Schneider hates money,” she said. Then, a bunch of kids took the stage – roundabout 10 to 13 years old, I gather. One wields a handsaw and bow, another mans a beatbox, another kid wields a miniature bass (that I’m a teensy bit envious of). And there’s one boy, the tiniest of all, hunched on a stool with a tambourine. That, we find, is Robert Schneider’s son, and the other kids are the Foresters, and they play very decent pop punk for us.

But the best part of the whole set is Schneider himself – and, also, the lovely woman with the pristine face sitting in white in front of him, pure and devout. She is a mirror of Schneider’s inner loveliness – the way he apologizes twice for even the slightest bump, the way he double checks with his partner John Ferguson about every song they’re about to play, the way his face radiates light when he invited the kids back on stage fos some Apples sing-alongs. Fathers were cradling their little girls at the front, people were sitting cross-legged with starry eyes up at Schneider as he serenaded us with songs he’d just wrote that day. Once again, the magic in the air was real and palpable.

Now, each day of the Popfest, a two-hour intermission follows the last act at 5:30. Some folks dart back to their dwellings and freshen up; others, such as me, venture out into the town for grub. I tell myself on this day that I’ll dine with a different party for every intermission – this is the kind of festival where friendships blossom, I told the readers of Immersive Atlanta, so I was keen to fulfill my own prophecy. On this day, Jason Seiple approaches me with acquaintances of his that I’d never met before. Progress? Maybe, except the couple talk largely of various beers and cocktail schemes. They tell me they plot to have brunch at the Grit (a beloved vegetarian diner) later, if they can wake up that early. I gather from the “if “ that they won’t, but I hold my tongue and continue to dip my grilled cheese between the nine different dipping sauces before us.

We reconvene at Little Kings. The writer – Dina, her name is – comes up from an angle and surprises me; she assumes that I don’t recognize her and gently pats my shoulder as an amused mother would chide a wandering five-year old. I decide that I hate her.

At any rate, I find myself crashing during the second half of Wednesday’s bash. Marshmallow Coast keep me afloat at first – see, their latest album, Vangelis Rides Again, sounds not like Vangelis but the Alan Parsons Project, and it works because Andy Gonzales catches the breeze of that breeziest prog without the solemn gravity of pretension. And so the M Coast draws from Vangelis for the entire set, wisely skipping his brow-raising take on “On Broadway” (it’s called “Homeless Baby”, which gives you an idea of why one might raise an eyebrow). And, of course, Gonzales is his lovely humble self, as he softly sings banter and constantly berates himself (“worst song ever,” he mutters about one of his own improv tunes).

Fatigue is sinking in. Marie Uhler (of Eureka California, who you’ll read about much later) actually convinces me to order beer, albeit a very pink blueberry sour draft – this speaks volumes of my mood at the time, as I usually swear by teetotalitarianism. So speaking, Nightblonde do not impress me as much as they should have – still, gotta give them credit for wearing matching black outfits and glitter wings in their left eyes. But the entire set, their angsty synth gothiness remind me of Clan of Xymox, which makes me feel even more sour than my drink.

But! Ah-ha! Casper & the Cookies to the rescue! Nothing cures cynicism like a romp with Jason Nesmith and Kay Stanton, Athens’ premiere power pop couple; before long, everyone’s bopping and hopping to the Taxman-groove of “Drug Facts”, humming and swaying to “Sid from Central Park”. But the Cookies save their trump card for last, the one that turned me on to ‘em three years ago, the sound of three clocks ticking at the same tempo but all out of sync, the wonkiest song that Elvis Costello never wrote, and certainly the most abstract solo that Andy Gill never dreamed of. Oh, “Thing For Ugly”. Hecklers gonna heckle, but when Nesmith grabs his bow for those disjointed jabs, I go nuts. Errytime.

Cancers do me in for the night. They tend to do that. “We’re too poppy for most punks, and we’re too punk for most popsters,” lead singer Ella Kaspar tells us, and I concur enough to quote her here. I last saw this fierce and fuzzy crew two years back at the most wicked punk house show I’d ever been privileged to see (so far); and, watching them cruise and bruise through their catchy-as-fuck set, the vibe of that house show – that magic of being included – keeps bobbing like a soapy bubble in my mind.

You’d have to ask someone else how Dressy Bessy or Elf Power did. Me, I’d already clocked out by Nana Grizol (Neutral Milk Hotel Jr., basically), opting instead to hang by the entrance and cling to some pals’ confidential chat. There will be many cubby holes like this in the Popfest, I’ll find – and mark my words, any other reviewer who elides these moments has left some magic untapped. The sparks of human contact, the refreshing drizzle that would escalate to downpour in the balmy night. This evening, with its murmured secrets and misty highs, would be just a taste of the greater metaphorical feasts to come. I could sense that then, huddled in Little Kings’ doorway, and I confirm that now, deflated and removed from the whole affair. To quote Bachman-Turner Overdrive, we ain’t seen nothin’ yet.