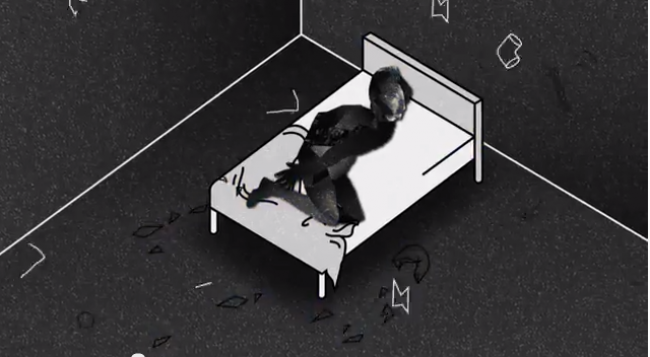 So. By now you’ve probably seen the one TV performance that us muso-types can’t stop buzzing about. But, in case you’ve tuned out yr social networks lately (we are smack dab in the middle of Lent, after all), here it is.

A fair chunk of the discussion ‘round this bouncing black-clad wonder has devolved into just the sort of “lifestyle” writing that Gioia descried in his bitter rant against the pop papers – lookit that mid-aged loser, trying to wiggle his way into the limelight! Who does he think he is, Phil Collins?

Now, we’ll bust up these claims in just a sec. But, first – to state just what we are gathered here today to discuss. Before me I have the product being endorsed in that wildfire video: the Singles LP set to explode in a record store near you.

In my car, on the other hand, I have another LP that ripped my heart out. And FUCK DID THAT HURT.

Kids, for any other writer these two albums would be as disjoint as two disjoint events in statistics – and in statistics, “disjoint” means that two events cannot occur at the same time. You can’t crash a car and cut a jig at the same time. You can’t seriously hammer down on a review while entertaining company. Disjoint. Ergo, Future Islands and Xiu Xiu are disjoint – they should not appear in the same review. The odds oughta be 0%.

But, in all honesty, Stephen Herring (that black-clad twinkle-toes) and Jamie Stewart (the bloke being brained in the video) share a bunch in common. They’ve both been in the biz for well over a decade now – the former cutting his teeth in all manners of tiny pubs, the latter honing his craft in a steady stream of baffling EPs and full-lengths. They possess exceptional voices – Stephen commanding his crew with guttural roars and soulful swagger, Jamie wielding a crypt-like whisper that can erupt into paranoid screams and unhinged machine-gun raving. And both of these new albums – Future Islands’ Singles and Xiu Xiu’s Angel Guts: Red Classroom – could be filed under “electronic music” – though, as we’ll soon see, that’s like lumping apples and pomegranates under the term “fruit”.

This is a joint review, because if we slide the Future Islands LP under a microscope and zoom in, we won’t see much. It’s a glossy thing, with a massive debt to New Order – that majesty of dance, that enigma and nuance of romance so perfected on Power, Corruption, and Lies – and the heavenly lush peak of Roxy Music’s Avalon. In this immaculate chamber – I dare not say “sterilized”, though I very well could – Herring plays out his passions through motion, defying the suave stillness with a burning fervor. Even in the airbrushed bliss of “Like the Moon”, the man pours his heart out.

However, the basic structure changes little – churning bass; lush synths like the fluffy white clouds on the cover; radiant guitar riffs; and of course that restless, searching fellow in the center, reaching with practiced desperation for our hand. Y’know, in that .38 Special kinda way: hold on loosely, but don’t let go!

Mind, I’ll be the last to spurn too much of a good thing. (Case in point – Cure’s Pornography.) But as much as Herring strives and jives, Singles spins out only as pure electric energy – fantastic stuff to fuel yr feet (trust me – I tested “A Dream of You and Me”, and it’s got just the right bounce for sane and happy dancing), and great tunage to safely fill a room with, but little to stimulate anything else.

Our protagonist’s passion is a glassy-eyed one, capturing yearning and even pastoral beauty (“Back in the Tall Grass” is quite a genius juxtaposition of rumbling locomotion and summery images) through shimmering windows into the past. There is bitterness encased under the gilded surface, but encoded only in pretty metaphor –

Looking out, at the burnt land, looking back at me…
They said if I stared
The abyss would stare back at me
So I did…
And I felt it slowly creep in me
(“A Song For Our Grandfather”)

You don’t feel the abyss when you hear this. Oh, no no no. Stephen can give one helluva emotive show, no doubt (and if Future Islands swept into Athens, I’d be the first in line to see ’em), but the abyss is nowhere to be heard or felt in the high sanctuary of Singles.

That’s where Xiu Xiu comes in. The ethereal space that Singles creates protects the listener from the physical world. Xiu Xiu, on the other hand, pins us to the dirt and rips us open.

The threat always sneaks in, through the pulse, or the innocuous drum machine (seriously – for a sec the skin-crawling trip-house of “Black Dick” [yes, “Black Dick”] sounds like Blondie’s “Glass Heart”). But Stewart is a master assassin, his voice the ultimate stiletto. Inhuman shrieks in “Adult Friends” stab through the slicing, sinister paean. Ya hear the ponderous church bells opening “El Naco” and think that something lighter might occur, but Christ no – this is the fanfare of the galloping horsemen, blood raining from the steel gray sky, and we no longer recognize the man who’s led us here, reduced as he is to shrieking hysterics – “THIS MAY BE THE LAST TIME WE EVER FEEL LOVE”, he cries at your face, as the ground rumbles underneath and the earth jerks apart between you.

See, I feel this. This is tangible. A force pierces me in the earlobes, straight through the head, deep in the chest, straight down to me extremities. Singles, for all its lovely energy and earnest passion, cannot do this. Both territories can be rather abstract – but this one, rather than floating above, stares ya directly in the face.

And then there’s “Botanica De Los Angeles”, which aches more than any damn thing Herring could ever wiggle to. I’ve heard this half a dozen times over the past two days, and the gorgeous acid seeping through every pore just KILLS me every. Single. Time. I could literally drown and die in this. A slow sinking downward. Overcome by asphyxiation and sheer awe. The weight of the world in the weight of that pound, in the shower of synth sludge. Destroy me now, please.

Ya wonder, as Jamie spews lines about crowns of hickeys and the black dick and the white ass and people who are stupid in the dark, why this isn’t sparking more conversation. Why a middle-age man jumping around on Letterman could incite more folks than such a heady, visceral, violating, and all-out WRONG album as this. The answer, of course, is that Xiu Xiu can never earn the massive exposure that Future Islands has – not even “Stupid in the Dark” could be unleashed upon a studio audience, lest the fear seep out like a poison gas, lest those folks feel the same raw lust as I do and lose their fragile little minds.

Perhaps my point here of mushing these two LPs together is to contrast this silly little Letterman buzz (wow, a frontman that actually croons and dances!), which amounts to nothing more than a tranquil pop product that both the masses and the musos can enjoy, with something genuinely challenging and provocative. Granted, both albums reflect the peak of each artist’s abilities, products of long, hard work over many years of whittling. But the two complement each other as the head complements the body – one to dream and wish and hope, the other to touch and lust and bleed.