Advice for Everett True on How to Write About Nevermind 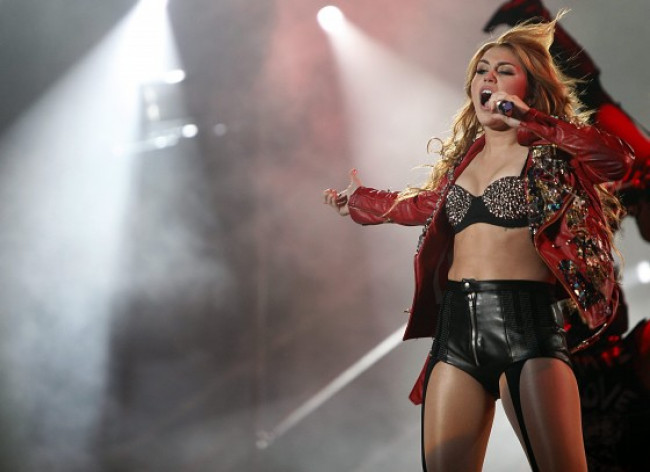 Start with a description of this video of Miley Cyrus performing ‘Smells Like Teen Spirit’.

Call it amazing. Be provocative – say that you think she’s underrated as an artist. Say that you love her song ‘Party In The USA’. Explain how in the song she gets off the plane in Los Angeles and is intimidated by the specificity of the place – the Hollywood sign, stiletto heels – but is finally comforted by hearing songs by Jay-Z and Britney, the familiar pop super-brands that let her know that, “Everything’s gonna be OK”.  Describe it as ‘Born In The USA’ updated for globalization. Act like that’s just fine and that you’re not offended by it at all.

Say that watching the clip on YouTube was profoundly touching. Say that it made you cry (even though it actually only brought a lump to your throat). Describe how in the video the kids do hand motions, and when they sing “It’s not about the bling” they grab their necklaces and when they sing “It’s not about the money” they wave their lunch money at the camera. Describe how at the end they throw their money in the air and then go scrambling after it. Talk about Dr. Luke and how much you love his production for Ke$ha, Katy Perry, Avril Lavigne and Miley Cyrus. Describe his style of ultra-compressed pop confection as coming directly out of Butch Vig’s production and Andy Wallace’s mixes for Nevermind. Talk about how Dr. Luke co-wrote and produced Avril Lavigne’s song ‘Girlfriend’ – the one that’s like, “Hey hey you you I don’t like your girlfriend! Hey hey you you I think you need a new one!”

Say that the song is genius. Say that it was the great riot girl pop radio breakthrough, only 20 years too late and with solidarity-destroying-competition-for-a-boy lyrics. Act like that’s just fine and that you’re not offended by it at all.

Go back to talking about the Miley Cyrus video. Describe how she introduces it as a song that she used to sing around the house with her little brother and how she misses him while she’s on tour. Describe the comments on the video, all the outraged pissed-off comments, declaiming that she has no right to touch the song, that she doesn’t know crap, that she’s just a manufactured pop puppet. Acknowledge that the people making those comments feel like Nirvana represents something precious that they don’t want to see trivialized, defiled, turned into just another product. Speculate that Nirvana represents all kinds of different important things for them, the right to be different, an example of calling out bullshit, the dream of being in your body wildly smashing bass guitars and crashing into drum sets, the right to be ugly, the right to know yourself as beautiful. Speculate that some of these people still can’t resist wanting to play Nirvana on Guitar Hero, even though sometimes the Kurt avatar looks and moves like Axl Rose. Comment that some of them might not notice this or see why that might be unnerving or even upsetting and that really that’s OK, being as 1991 was a really, really long time ago.

Say that right now kids are probably singing ‘Teen Spirit’ in school chorus, doing hand gestures and thinking that Miley Cyrus and Dr. Luke wrote it. Say that the meticulous, detailed – yeah, slick –  production on Nevermind made the messy passion of Nirvana come alive for the marketplace and that for better or worse – OK, for better, you have to say for better or you’ll sound like a jerk – it happened right then, not 20 years later and with the lyrics and meanings all twisted around backwards and inside-out. Say that, sure, you love Nevermind, that it’s a masterpiece, one of the 10,000 best rock albums of all time but that the real thing is not so much in the songs, the playing, the recording, it’s in the way that in spite of (and because of) everything people continue to listen THROUGH the music for glimpses and echoes of something angry, confused, wounded, stupid, fragile, vengeful, moral,  in other words, for visions of what it means to be human in a world that tries to make us not.

Or write something else. But that’s the way I’d do it.  🙂