A review of ‘Wolf’ by Tyler, The Creator based only on the front cover 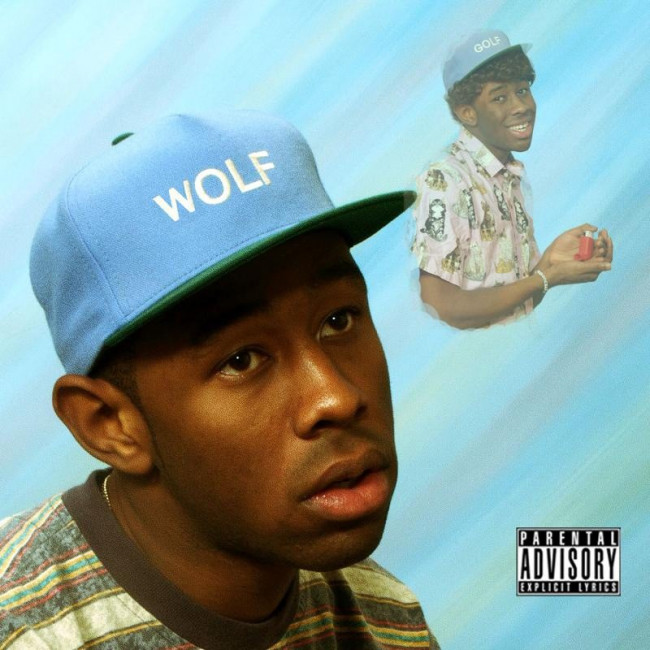 We have a special guest reviewer today, Charlotte (my wife). She doesn’t actually know who Tyler, The Creator is – and I thought it would be good to get an unprejudiced opinion.

I assume this cover is trying to put across some sort of ‘good versus bad’ scenario, unless it’s a ‘before and after’ thing. It’s probably the latter. In the background, he’s wearing a GOLF cap. He’s got longer hair, which is presumably meant to be unfashionable, and he’s simpering. He’s got cats and dogs on a pink shirt. He’s displaying something in his hands,which looks to be an inhaler. In the other picture, he looks a bit stoned: unshaven, and his mouth is hanging open a bit. From GOLF to WOLF. My assumption from the PARENTAL ADVISORY sticker is that he’s some sort of rap artist.

My thoughts are that Tyler is feeling a little vulnerable on this album, perhaps caused by overexposure that he wasn’t expecting. He wants you to know that he’s sensitive, soulful but still rebellious (stoned). That he had a sort of happy childhood that went sour years ago. That the music is a bit spiritual AND a  bit rebellious: hence the unshaven face, the PARENTAL ADVISORY sticker. That perhaps he was once a member of the Mickey Mouse Club like those other great “bit rebellious” pop icons – Britney, Christina, Justin. That there’s something a little Value Village about the music (the crude cut-outs, the washed-out rainbow colours). That maybe he’s looking for salvation of one kind or another, That the music is slightly schizophrenic, split persona. I’m guessing this would be ‘difficult’ third album, where he’s wanting to show off his status as a ‘mature’ artist – just like Britney, Christina, Justin. No longer a street punk, but an old hand with his tales of remorse and revenge. He’s giving himself room to vent, so it’s going to be a sprawling beast of an album – plenty of synth-play among the misanthropic raps and gratuitous misogyny (just to show his critics he ain’t so easily bowed). A touch of jazz, a bit of depression and a whole bundle of defensiveness. Blame the parents? Blame the femi-Nazis? Yes please. Look at that back photo.