A review of ‘Mosquito’, the new Yeah Yeah Yeahs album, based only on the press release 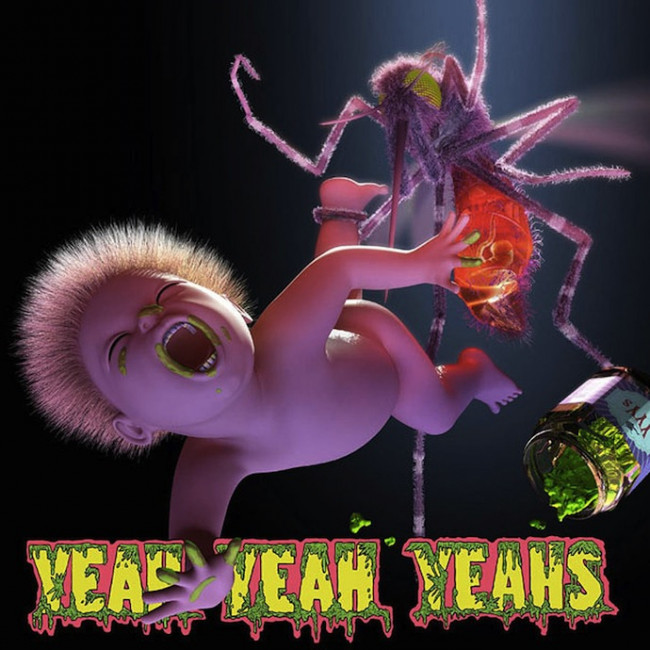 This is a not a review of the new album by Yeah Yeah Yeahs.

Their Australian press agents Mad Dog Publicity do not consider Collapse Board important or influential or trustworthy enough a site to be sent a copy, or a download, or even a stream of the forthcoming Yeah Yeah Yeahs album. Instead we’ve been directed to the triple j website to listen to a stream, because – um… wait a second, isn’t that rather rude? Like telling us how crap and unimportant we are, and we should just shut the fuck up and be grateful for even this smallest of small tidbits. (Rather pointless too, bearing in mind that MP3s are – literally – worthless. Just ask Bruce Willis. Or rather, don’t.)

And there’s a special prize for the first reader who spots the following words rehashed online at a ‘proper’ news or music site.

OK. First up. That opening sentence.

I really do NOT think Collapse Board will be hearing it “first right now via triple j”. For one, we don’t hold much truck in supporting a website that uses Government dollars to champion the most ordinary of Australian music, music that is specifically designed to be played on triple j. For two, we suspect that maybe a few thousand – or ten thousand – other people have already heard it “first right now” on triple j even we did hold any truck in doing the above-mentioned. Also, reliable sources inform us that Mosquito has been available as illegal download in all the usual places for several days now, which means not even the most dedicated of triple j aficionados will have heard it “first right now”… although of course we actually disapprove of such places even more than we disapprove of triple j as their users are leeching the blood out of the music industry even faster than the music industry itself, which is saying quite something.

Those production credits are fascinating, but they don’t give you much sense of the music, do they? It’s a shame we don’t have folk around in Australia who might be able to do that – let’s call them music critics, for want of a better phrase. Of course they’d also need to have some sort of ready access to the music… crazy notion, you say? You’re probably right.

Nice to know there’s a deluxe album but it might as well be a complete fucking Smithsonian Library of Recorded Yeah Yeah Yeahs Burps for all it matters to us, as we sure as shit ain’t going to be hearing it any time soon. (Yes, we could buy it. Yep. So could the PRs, and the managers, and the promoters, and everyone else who works within the music industry.)

That quote from Karen O ain’t up to much is it? Bland as a bland mousse with bland sprinkles on top, eaten in Manhattan with a bland set of bland bald Republicans for company.

“Basically, we trashed that room. We got bored because we were in there for hours. Clinic’s room was next door. It had like a table with all their equipment on it. I peeped in to see if they were hanging out in there and no one was. That really pissed me off. So I motioned to my girls like, ‘Girls, come on – Clinic’s not in here.’ So we ran into the room and the next thing I know my friend is tearing records off the wall and breaking them on her knee. So I start to do it. Then I spy the Clinic masks and there’s, like, three boxes of them. We grabbed them and walked into the hall, stuffing them under our shirts so no one sees us, into the room we’d already trashed, stuffing them under sofa cushions. That’s when we were asked to leave.”

Hmm. Maybe they should hire an expert?

The cover. Yeah, the cover’s groovy. Obvious shades of Nirvana – the title itself, the naked mewling baby – and beautiful use of colour, recalling some of the glory days of 80s U.S. underground comics (c.f. Richard Corben). Plus, the band name lettering, oozing pus and gore, seems to be in tribute to The Cramps, I’d say. The mosquito itself is fuzzy, mean, aggressive: I think we can expect a lot of high spirits and lean instrumentation on the album itself, maybe a slight return to some of the band’s No Wave roots. The baby looks a bit like a doll Troll. Good. Vivid splash of red. Good to have a vivid splash of red. Some green goo in a jar… could this be a signifier for the overall sound of Yeah Yeah Yeahs in 2013? Let’s hope so.

3 Responses to A review of ‘Mosquito’, the new Yeah Yeah Yeahs album, based only on the press release