'A confusing unrestful world' | an encounter with Slum of Legs 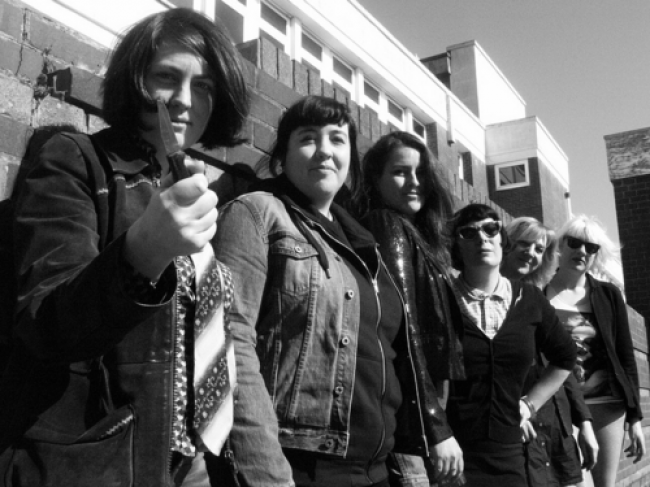 A good friend who keeps her finger on the pulse on all things Riot Grrrl related, its various incarnations since its initial explosion in the early 90s, alerted me to the online presence of a label called Tuff Enuff records, based in Brighton and the spawn of, in their own words, “a Queer/Riot Grrrl night” called Riots not Diets. I must confess I don”t know much about Brighton except that Nick Cave lives there, and Huggy Bear and Electrelane are from there. The name “Riots not Diets” excited me, especially because Huggy Bear were the main force behind UK Riot Grrrl (they released a split album with Bikini Kill and toured with them). It seemed fitting that such energies are still present in Brighton. I tore through the label”s Bandcamp, noting a handful of compilations and single/EP releases. One of their very first comps was Why Diet when you could Riot?, released in early 2013 with an endorsement from Kathi Wilcox. It features many of their staple bands, including Skinny Girl Diet and London”s The Ethical Debating Society. Six months later, they put out a limited edition cassette run titled simply “DEMO” by a band called Slum of Legs. I remember thinking, “what a cool combination of words”. I mean, I”d never considered “slum” next to “legs” but I was surprised that I hadn”t. I googled the name. I discovered the band were soon to support The Julie Ruin on their upcoming UK tour (impressive), had already supported the likes of Perfect Pussy and Joanna Gruesome, and had engaged in a few interviews with some independent publications. I also stumbled across this:

This sculptural, iconic table was designed in 1956 by Finnish American architect Eero Saarinen. Explains Saarinen of his classic 20th century design: “The underside of typical chairs and tables makes a confusing, unrestful world. I wanted to clear up the slum of legs.

Now, I don”t know if the band really are referencing a table architect, but if they rally were looking to articulate a “confusing, unrestful world” then I was interested. And because I”m a chronological sort of person, I went straight to their debut release. On first listen, I was instantly captivated by the strong yet conversational vocals of lead singer Tamsin Chapman. The three tracks had a scrappy, lo-fi quality in keeping with their DIY ethics, which is what you want if you”re after a raw, moment capturing sound, but it was a bit too muddy, and the violin sounded muted. But passion and energy is what I look for, not production quality, and they had it in spades, the scrappy punk leanings reminding me of early Raincoats and Huggy Bear. I was entranced. I listened to the songs several times, ears straining for the lyrics so I could yell along. I was especially drawn to “Benitent and Malevolence”, with its catch-cry of “when you”re sad you”re invisible” and a trailing, mournful guitar line punctuated by shrieks. I needed to hear it live, and while I couldn”t immediately catch a plane to Brighton, I settled for some shaky YouTube footage. The song was the killer I suspected it was – a six-headed eruption of disillusionment and reality checking. From Tamsin”s barefoot gyrating and chant like delivery, to drummer Michelle standing up while she pounded away, from Maria”s dissonant violin and the energetic bass of Alex, to Kate’s unpredictable guitar and the occasional bursts of keys from keyboardist Emily, they sound and look ready to take on everyone and anyone.

Here was a band that sounded bitingly fresh, with an unashamed nod to pioneers The Raincoats and Bikini Kill. I hadn”t been this excited about a British band since my obsession with The Libertines seven years prior, a band that fell into a scene teetering on the aftershocks of the 90s, with manifestos, romantic passion and insightful lyrics, amid the guitar-wielding indie clones of early 2000s bands. Slum of Legs are similar to them in a lot of ways – closely knit, not afraid to pay homage to their predecessors or to subvert stale ideologies. The third track on their debut cassette is called, casino simply, “Slum of legs” and is a manifesto if ever there was one, opening with the lines:

“We are a superstructure

We are a fur-lined rupture

before launching into a scathing cry, that gave me goosebumps in the same way Patti”s defiant opening lines on Horses did when I first heard it:

“The greatest lie that’s ever heard

Is that the meek inherit the world”

placing them in the tradition of not only brazen punk poets like Patti Smith and Lydia Lunch, but also within the lineage of outspoken British bands like The Libertines and Manic Street Preachers, and before them The Slits and X Ray Spex – and yet they are so much more. They are a band for a new age, a female identifying voice that is determined to fight its way through Britain”s throat – heck, the world”s – and be heard, damn all who stand in their way. The era of indie boy clones – that magazines like the NME like to champion – is over. Slum of Legs is here to offer us a guiding rough around the edges lantern through the mud of stereotyping and normalising mainstream media, alongside other new Brit bands like PINS and Savages, who all happen to be female, who all seem to burn inside – wouldn”t you, if you grew up being fed stories of indie boy clones and their goings on, in the meantime scrounging for what you could find of alternative rock made by women? But I digress. I”m a little bitter, as a former reader of NME, and yes, I know, NME loves The Libertines. Theirs is a ship that is sinking, and so of course they cling to a band that offered a manifesto they could take up as their own. Moving on! You might be thinking, what else has Slum of Legs put out since that first tape in 2013?

Well, exactly a year later they released their first single “Begin to Dissolve” and embarked on a string of shows between Brighton and London, and just last month, followed with another single, “Doll Like”. It”s no surprise that I loved the sum total of four additional songs.  The sound quality has lifted from barely there home recording to something that is still DIY punk rock but louder and clearer. The first A-side “Begin to Dissolve” opens with spooky synths and violin laced around a repetitive rhythm, as Tamsin sings from the eerie point of view of a newly initiated ghost who is about to “dissolve”. You can”t pigeonhole her lyrics – they literally will be about anything and everything you ever felt but either couldn”t articulate or were too afraid to voice because it might be too weird. “It only takes a short time to get used to thinking about someone in the past tense,” Tamsin shouts as the music builds up towards a climatic implosion, and it puts into words something I”ve been feeling for a long time about death and the idea of legacy. Their second single A-side “Doll Like”, written by drummer Michelle, is catchy as fuck. It is very reminiscent of the ramshackle yet strangely melodic early Raincoats, and the opening lines are so brilliant I nearly shouted them at some commuters the other day: “Ohhh you”re looking good to me. You said you look like Grayson Perry, wiith your nancy curly hair. Ohhh all I want to be is a fuck you granny. I”m not a tranny.”

Lately I”ve been reading a lot of intelligent, passionate articles featuring transsexual voices ranging from one of my hometown bands to the rising Against Me!, and I am so fucking glad. We need the multifaceted voice of bands like Slum of Legs, who in their songs underline the importance of marginalised voices and what it feels like to deal with labels and stereotypes. When we label things or people without stopping to think about the complexity behind that label, we are also halting our ability to empathise, to hear the stories of others. But Slum of Legs aren’t all about manifestos either – they”re also a band that want to surprise you. And B-side “Half day closing” does just that. It”s an unconventional ballad, an ode to being relieved of work halfway into the day, with an earnest romantic lyricism that Peter Doherty would be envious of. Tamsin talks of “having time to kill”, of finding gas masks and rosary beads, of liminal spaces and school days and burning bridges, and as ever the spiky glass is still there, as she adds “but you can”t forget that you will never belong”. It”s a song that is beautiful in its articulation of the weirdo voice, the misfit, the outsider, in a society where so many people – especially in a still fervently class conscious England – still reside on the outer edges of media recognition and public opportunity. And yep, I”m still going to believe Slum of Legs are the best thing to come out of Britain in years tomorrow, and the day after, and the year after that. I”m already excited about the debut album. Are they going to pull off some of the claims I”ve made about them? They”ve already presented us with a magnifying glass to “a confusing unrestful world” bleeding through their blissfully noisy anarchic rock, dripping beneath the veneer of modern architecture and modern society, and I reckon they”re tuff enuff.

Postscript: I”ll be interviewing the band in a few weeks. Watch this space.