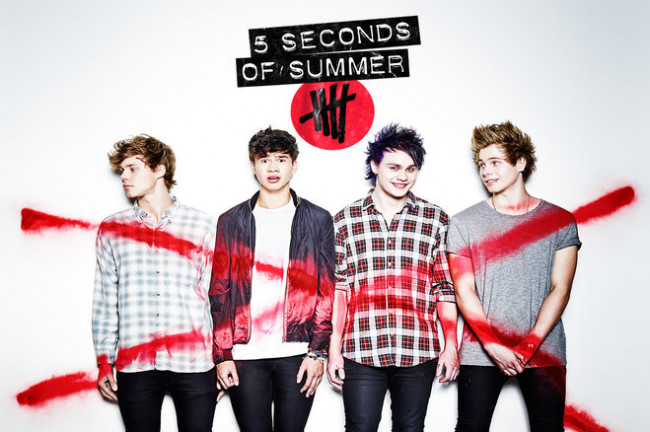 (And before you protest – “But Lee, how dare you bash pop music” – I direct you to this. Read it and weep, you smug little louts.)

Any 20-something American probably recalls the irrepressible refrain from Fall Out Boy rebounding down their school halls – “down, down, in an earlier round, / sugar we’re going down swinging.” Or, no doubt, that one Green Day song that nearly every girl in class soundtracked their life story Powerpoint presentations to, that acoustic one which I don’t even remember the words to now but was something like a über-gushy kiss-off. “Good Riddance”, that’s the name of it.

Attitude for the masses! Melody and eye candy for the ladies! Scientifically proven and homogenized riffs for the industry saps who program radio stations like 22nd century industrial factories, i.e all shiny and round corners and robots at the assembly line! Yes, ladies and gents, it’s POP-PUNK, the disposable riff-raff of my generation, which blends carefully concocted rock formulas with Autotuned voices and young wiry pin-ups guaranteed to appease the lusty youths. Such is the blueprint for 5 Seconds of Summer (herein referred to 5SOS) – who, at a first glance (from someone who NEVER, and I repeat, NEVER fell for the pop-punk plague), only seem to perpetuate the same overblown format for a new crowd of schmucks.

Now. This article suggests a conflict in nomenclature, and a difference in values between two categories. There are boybands [a collective of pricks that don’t play instruments and, indeed, minimize the importance of the music itself only to flaunt their altered voices] and pop-punk bands [lads who play instruments and act as stewards of the hallowed RAWK traditions, nurturing good taste in the upcoming generation of iPod-waving rock rebels]. “You can tell our fans from a mile away, they’re the ones wearing Nirvana shirts,” one of the eager-eyed blokes said to the Guardian.

Me, I consider this a trivial and downright silly argument – equivalent to an American and a Brightonian debating over the terms whipped cream and squirty cream – which skirts conveniently over the contents within, i.e the music itself (or the cream itself, though in that example methinks all sides would agree that canned, squirtable cream is delicious and an essential staple of any good slacker’s fridge). Debates like this allow non-music critics to spill over aesthetics – the band’s image (squeaky-clean…ripped Unknown Pleasures vest), stance (“We’re not going to write about politics. Maybe when we’re older. But we write about being a social outcast”), and fan base (“Not. A. Boy. Band,” one [female fan] says, with terrifying solemnity) – whilst barely dipping their toes in the actual aural stuffs that musical groups exist to create.

So, without further ado, let’s dive in, shall we? Exhibit A – the crystalline, chlorine-reeking swimming pool (replete with lifeguards to watch the kiddies) of 5SOS’s self-titled debut. Safe for all ages. All the dirt and crud’s been siphoned out, bleached away by shock treatment, scrubbed down routinely. But guess what the first song’s about?

You look so perfect standing there
in my American Apparel underwear

The crime isn’t the explicit reference to sex. It’s the polish. The anthemic “HEEEEEEY”s, the stadium-light-bright riffage. The reduction of an angsty, furtive, frustrating, sweaty, euphoric, embarrassing, nasty, smelly, awkward, and so forth activity to a rosy red success story cliché.

Worst of all, however, are the painstakingly specific choices of dress and aesthetics – American Apparel, ripped skinny jeans, the “Arrow heart” tattoo, “a mixtape straight outta ‘94” (which I’m willing to bet is a custom-made CD-R – mind, I’m all for CD-Rs, but not for misappropriated nostalgic terms). 5SOS exist and thrive because the image of the American teenage “rebel” has crystalized not just into a highly commercial product, but an acceptable and mainstream style in itself, as predictable as the preppy-types they detest. That’s not their doing, of course – for two decades now, American teens that wanted in on the counterculture need only poke down to the Hot Topic at the nearest shopping mall, which ya might think of as the corporate and franchised recreation of Malcolm McLauren’s Sex boutique (but stripped of its mind-boggling variety, Dadaist creations, and rubber shirts). But “She Looks So Perfect” establishes 5SOS and the album that follows merely as a commodity imported from our shores, a simulation of defiance and rebellion that only redirects youth to another sector of the corporate machine.

I do ramble, but really all the despicable stuff about this debut does stem from that opener:

1. The uninspired stock riffage and airtight vocals. Rampant. But especially deplorable – yes, some tunes ARE worse than others – are tracks that betray even 5SOS’s skater dude / Foo Fighter stance. “Everything I Didn’t Say”, for instance, has that dreary oceanic “whooooaaa” ripped outta folk-pop brother outfits (or even those dull Fun. blokes), and also that horrid flat kind of chorus that defines soft rock power ballads. “Beside You” hardly even qualifies as pop-punk – I hear this and think instantly of adverts for those radio stations that claim to offer “all the hits! From the 80s, 90s, and today!” and then play clips from Maroon 5 or some other dull groomed white boys crooning at the screen.

2. The boneheaded “good girl vs. bad girl” dichotomy. Also rampant, but presented explicitly in track #3 – ”good girls are bad girls that never get caught”. Maybe I demand too much from a pop song, but every once in a while, these dudes oughta champion girls for other qualities aside from their willingness to have sex. Y’know? Which leads me to my next point –

3. 5SOS’s aggressive possessiveness. Catchy, ain’t it? So is “18”, a headbanger about a lascivious minor who keeps pictures of an older girl in his “private folder” and admires her “naughty tattoo”, which is “in a place that I wanna get to”. Songwriting gold, I know.

Now, as a technical grownup (eek), I can step back and see this as perhaps some fleeting youthful lust, which the kid’ll probably forget about by the time he really IS 18 – but ya think the song conveys that angle? Noooo, it’s another stadium-filling anthem, encouraging all male listeners to keep their eyes on the prize, ‘cos one day you WILL bang that chick and then she will be YOURS. I don’t even know how girl fans can listen to this with any trace of approval: “Yay! I’m so glad that boys want to mark me as a sexual object!” But then, many chicks approve of Twilight and its stalker pseudo-vampire protagonist, so maybe I’m just not in with the young ‘uns.

The same self-entitlement stabs through “Heartbreak Girl”. You’ve heard that story before – the “he’s no good for you, take me instead” plotline. (You’ve heard the melody before, too – but bugger me where.) But then they say this:

And when the phone call finally ends
She says, “I’ll call you tomorrow at 10”
And I’m stuck in the friend zone again and again

Hey, dickwads. Sometimes (in my case, nearly all the time) a girl needs friends more than lovers. And you realize what a massive RELIEF it is to find blokes who listen to me like any other human being and doesn’t plot to conquer my body when I leave the room? If a chick tells you you’re a great friend, ya better fuckin’ appreciate it, or I’ll knock yr pearly whites out, EACH AND EVERY ONE OF YOU. BRING IT.

In light of this, “Lost Boy” does not ameliorate things (even if the intro, for five seconds, reminds me of “La La Love You”). I imagine the girl fanatics love this one, and insert themselves in as the object that the singer(s) “can’t do without”. But this sounds to me like overblown whining. Gal up, y’all – go listen to Sky Ferreira’s “24 Hours”, a far more gripping take on this “you complete me” territory ‘cos the protagonist in that song HAS to let go, for some deliciously unknown reason.

4. Exploitation of nostalgia. What other reason would the singer say “I saw you with your Cobain shirt” (“End Up Here”), “I made you a mixtape straight outta ‘94” (She Looks So Perfect), or “Green Day on the radio” (“Long Way Home”)? We touched on this with Kimbra back in May – the “cashing in” on bankable names to give yourself credibility. You’d expect references in a song called “90s Music”, though – that’s part of the conceit. But even there, as here, the connections to the music itself seem superficial. If 5SOS really dig Nirvana, then #3 wouldn’t be such an eyesore of an issue, now would it?

Plus, the inevitable “hey-we’re-sensitive-see-we-wrote-an-acoustic-ballad” closer, “Amnesia” is an atrocity in itself. Especially the “I wish I could wake up with amnesia / and forget the stupid little things” lines, the refrain of a godawful poem from a lusty high schooler, belted out again in that dated heartthrob style that just about every solo singer from a boyband goes on to do. Grow up, you wimps – a sour relationship, and yours in particular, ain’t the worst memory in the world. (That’s not as bad, though, as the hopelessly equivocal “I’m pretty sure that we’re halfway there” bit from “End Up Here” – OH THE HUMANITY.)

Fuck. Maybe there’s merit to that “Good Riddance” number, after all.

But see, we have to scrunch our eyes and stare mega-sensations like this square in the eyes. We may not agree with Sub Pop or Matador or Captured Tracks all the time, but really – how many folks buy Mac DeMarco rekkids, anyway? Now, how many kids do you reckon consume junk like this? Lots. Lots and lots. Girls on both sides of the Atlantic will swoon in droves for these stick figures. That’s why I’m-a trying to elucidate exactly why this 5SOS stuff is trash – dull, conventional, sterilized, uninspired trash.

Have I made myself clear? Good.