4 tracks with the Versace stamp of approval for April 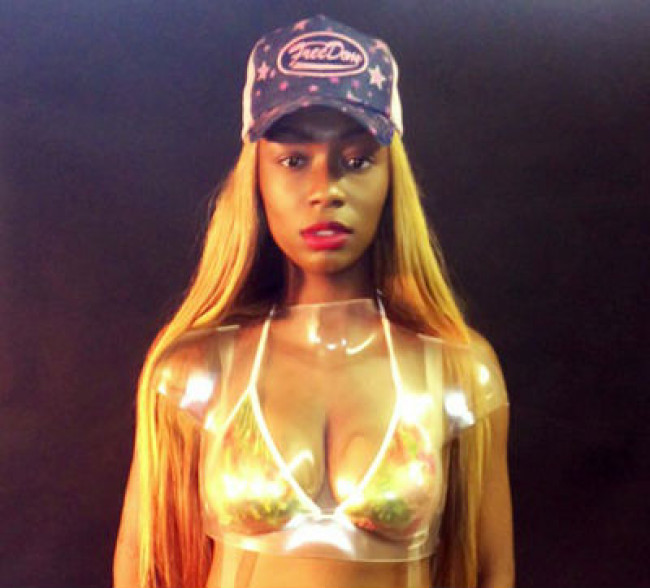 Speaking of Versace – Rihanna straight up sported the hottest look of the past decade this week in Versace’s crucial Fall/Winter ’15 collection.

I find no better way to commence than to feature this absolute corker in celebration of Rihanna’s new release ‘Bitch Better Have My Money’, primarily because Low Life have written eons of tracks more effectual than anything Rihanna has ever dropped.

“Amazonian Queen I wish you were here, here to dominate me, here to destroy me.”

In high school I woulda written lovelorn letters to this band. Now I just wish I was capable of producing music like this – the sheer demonic veracity behind the repeated, shrieked vocals, the repetitive No Wave guitars and the bleak simplicity as it all unfolds and plays out unescapably. ‘Mambo #666’ is a primo example of what hellish plane Whitney Houston’s Crypt exist within. I’m left to my own defences as I involuntary become obsessed with this sickly, powerful beast of a band straight outta Newcastle. It’s compulsive and it fucken rules. I’m only embarrassed my introduction is this late considering the potent ‘Chair Page Dotcom’ was released mid last year. It took being on a compilation  alongside this band to come to realise that they’re one of my favourites in Australia. On their Bandcamp they describe themselves as devotional No Wave and I reckon that’s pretty apt.

Tinashe – Worth It Feat. Iamsu!

Tinashe’s ‘2 On’ was unstoppable – it very rapidly upon its release became the certified anthem for legless girls shonkily applying liquid eyeliner pre-club. Her debut record Aquarius (most of which was concocted in her bedroom at her ‘rent’s place) was dizzying, silky and hedonistic.

I was hesitant to jump into listening to her mixtape Amethyst (recorded in that same childhood bedroom) released March due to the fact I had so frequently listened to Aquarius and due to the fact a day wouldn’t go by where ‘2 On’ wouldn’t creep up on me unexpectedly. Finally giving the amatory slow-burner Amethyst the chance it deserves I’ve discovered ‘Worth It’ featuring rapper Iamsu! It explores the wrong – who would’ve thought I’d come round to irritating computer-generated water droplets so quickly? However, I’ll be damned if I ever have to face that obnoxious sax solo – I choose to finish the track at 3 minutes 40 seconds save hearing that bullshit.

“Fucking the mental while you strokin’ the soul, that’s what you call fucking self control.” Junglepussy’s Satisfaction Guaranteed released through Vice last year was a preliminary introduction to the innumerable personal mantras that guide the deeply spiritual JP through the universe. Highlights on the record included the zinger “like Rihanna forehead you gotta think big” on the pulsating, fast and furious ‘Bling Bling’. Now a year since its release the overwhelmingly erogenous ‘Me’ is gifted visuals. Junglepussy is cheeky, intelligent, blaringly self-aware and at all times – inspired. ‘Me’ with its sparkling lounge pianos and bursts of saxophone courtesy of producer Shy Guy, is essentially the impeccable beginner’s insight to the spiritual finesse of JP as she informs us that fruits are the earths candy, her titties are lotioned, her mind is open and that you too can replicate this embodiment of human excellence if you’re disciplined enough.

With lines such as “all skin is intimidating reflecting power equally shared within – quit the hating” Junglepussy cements her place as the rap game Lauryn Hill or Erykah Badu (whom she name drops on the track). ‘Me’ has me moisturising compulsively, embracing the feminine more heavily and activating my crystals under the full moon in the hopes I too can gain the clarity of thought she so often preaches to us mere mortals.