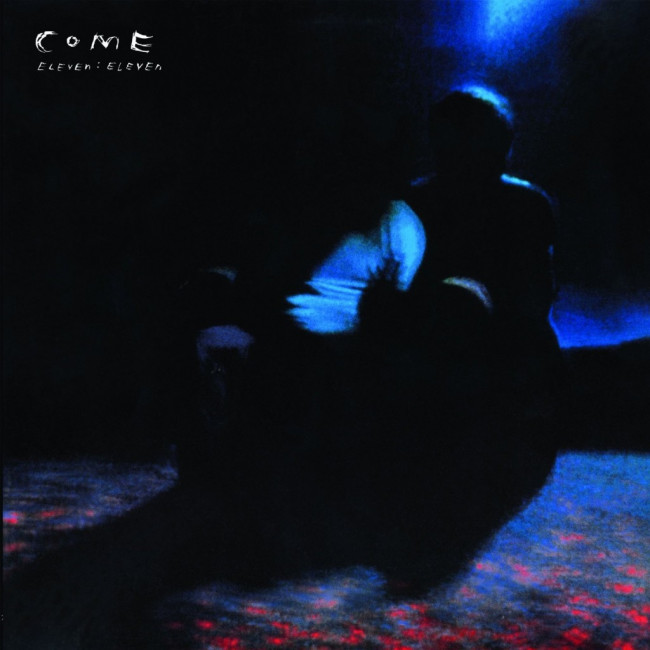 I believe that the reissue of Come’s 11:11 has happened. Doubtless someone will send me a copy at some point.

Meanwhile, here’s what I wrote for it.

“Just relax,” the lady sang, knowing we could never do that.

“Just relax,” the lady sang as the guitars wound their way inexorably to a resolution all the more unnerving for its false hope. “Just relax,” she sang relentlessly, every nerve-end tingling. Silence, and then there was more… what? More intensity, more layering in of claustrophobia, more words wrenched from the depths of isolation.

I can’t recall any Come shows from the Nineties. Maybe I’ve blocked them out, blacking out on a regular basis in futile resistance to a life that never came tumbling down, not in that way at least. When I was in my twenties, I would listen to Otis Redding’s version of ‘A Change Is Gonna Come’ on my Dansette portable mono record-player over and over again, the volume turned past 11, no lights on anywhere, tears streaming down my face. Where was the joy? Where was the resolution? I can’t recall any Come shows from the Nineties, not from Boston London Manchester anywhere. I can imagine how I danced, though: feet lurching drunkenly from one blank face to another, shoes grinding an imaginary hole into the floor as another twisted riff from Chris Brokaw crossed daggers with another bruised chord sequence from Thalia Zedek, not looking at anyone, ears long ago lost to blissful oblivion.

It was in the voice mainly. The way it seemed dragged down by layers of hopelessness. Come were performers, of course. All art is a performance. But it never seemed like there was any separation in their music, that it was an act (beyond the carefully constructed songs and harmonies and instrumentation). They were giving all of themselves, every time they played live or stepped into the studio. The art becomes the life becomes everything.

Ah yes, blissful oblivion. Sometimes that seemed to be the only aim of Come’s music. Fill the gap in between the silences, find some form of noise to fill the roaring silence in your head. Flick the switch back to ON somehow.

In the Eighties, I used to go see this band UT – NYC contemporaries of one of Thalia’s earlier bands Live Skull. Their tuning-up between songs would frequently take longer than the songs themselves. They had bottles hurled at them by Fall and Birthday Party fans. They layered intensity upon intensity – wrenched out with a passion that must have physically hurt – in a way I didn’t see again until I saw Come play live and danced my desperate, lonesome groove to their desperate, lonesome blues.

Ah yes, those Come shows of the Nineties. I remember them fine. I just don’t want to admit to such a feeling of vulnerability these days now I’m a dad and have folk reliant upon me. Noise and lights and thunder and claustrophobia and guitars churning up meadows of ancient refrains, with everything teetering on the edge of collapse and sometimes collapsing right in on itself before starting up once more, painstakingly; almost blindly. The drums would strike up. A guitar might be raised, although I recall the musicians being as unwilling to look at me as I was at them.

This was too precious, too charged, too intense. I don’t want to sully it with memory,

11:11 is Come’s debut album from 1992. It’s the one where everything should have fallen apart but came together so devastatingly. Raw, beautiful, intense: many bands at the time claimed to be doing what Come were doing but none were. Really, none were. It’s a fucking great job music ain’t a competition because… (shrugs)… never mind.

‘Brand New Vein’ builds and builds until you just want the whole world to stop turning and take notice. ‘Bell’ is sparser and icy-blue cold, arpeggios in stark contrast to the dark sentiments, rhythms serrated and mutinously belligerent. Great rhythm section. The opener ‘Submerge’ (B-side of the debut single) is classic Come … and yes, there should be a phrase like ‘classic Come’, bearing in mind that without a shadow of a denial Thalia Zedek possesses one of the great Lost Voices of the Nineties. Just one song in, it feels like the darkness can’t become any deeper.

It does, of course.

Guitars churn, and the rhythm section of Arthur Johnson and Sean O’Brien forms a molten broth that coalesces around the dissonant harmonics. Guitars churn, and Johnson and O’Brien play like men possessed at the crossroads. ‘Power Failure’ betrays Zedek’s No Wave roots in Uzi a fraction, and then moves on, slowly and tirelessly searching for a (final) solution.

“I don’t remember being born,” she rasps on second single, the relatively sophisticated and upbeat ‘Fast Piss Blues’ (the title perhaps an unconscious tribute to Patti Smith’s ‘Piss Factory’?), the noise and  claustrophobia still building. Where are you from? Well, you’re wrong.

I interviewed Come three times in 1992 – in an attempt to distance myself from their music and understand the personalities. It didn’t work. I couldn’t distance myself from their music. I didn’t fucking want to. It was too darkly beautiful, too beautifully unnerving. It soundtracked the downside of my desperate hedonism, which was pretty much all of it, now I look back.

The final song, ‘I Got The Blues’ – a Rolling Stones cover with added desperation – was Billie Holiday, like I always understood her.

“Just relax,” the lady sang, the bleak humour all the more potent for its uselessness.