101 Albums You Should Die Before You Hear, Vol. 1 – A Biased Review 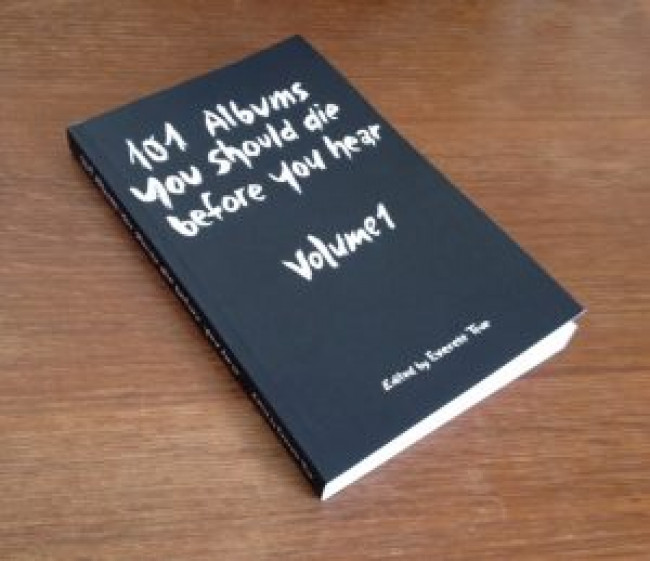 So. You remember that rejected 33 1/3 chapter that Everett True posted on here back in September? Well, shorty after that, he posted on the Facebooks that he had a new idea for a book, and he needed writers FAST! Within a day, those who replied were shepherded into a new group called Rejected Unknown – and their first mission, should they choose to accept it, was to pick the albums they loathed the most and tear them to shreds. Thus – after several tight deadlines, thousands of gnashing teeth, haiku think tanks, and a few choice cuts from the archives of the internet – the body of 101 Albums You Should Die Before You Hear, Volume 1 (i.e the book I’m reviewing to you) coalesced into being.

If you’re a loyal devotee to Collapse Board, then some of the chapters will look familiar – Lucy Cage’s furious fist-shake at Spiritualized, several of ET’s takedowns, Neil Kulkarni’s almighty screed against Peace and the writers that defended them and their mediocre ilk. But hey, now you have them to hand, to flip to instantly and study for hours until you can quote full lines.

Collapse Board readers will also recognize many other all-stars, young and not-so-young. Prodigal son Scott Creney lent five fresh dissections to the mix, killing sacred cows like Loveless, 69 Love Songs, and the Band’s “Brown Album” with brutal efficiency. Tiarney Miekus, who penned some righteous essays for us in recent years, sent a real zinger on the Doors’ LA Woman. And kicking_k tackled Metal Machine Music with a letter from Lou’s publisher (and a genius twist).

Wait, a letter? Oh, yes. Some of the entries – in fact, a good swath of them – aren’t reviews at all. That’s what makes this book really special: you, as a reader of music-related books, know how albums and artists shape your identity, your philosophy, your interactions with other people. And thus, the stories that these writers share – Brigette Herron’s empowering break with a possessive boyfriend, Ngaire Ruth and her vibrant memories of a childhood illuminated by radio, the brush with the law that convinced Amber Bighorse to drop her Scooby Doo voice – resonate so much with us, that they illustrate an album’s mediocrity without even touching the content. After you’ve read Frances Donnelly’s chilling tale about OK Computer, you may never want your earphones dialed to Radiohead ever again (as though you didn’t already have your reasons for staying well away from A Moon-Shaped Pool).

I have not even mentioned the twisted illustrations from Vincent Vanoli, who drenches album covers in slime, maims familiar faces – and yes, drew Bono taking a piss. Even when a review doesn’t quite skewer its subject through, the accompanying picture at least adds a smart kick.

Yeah, not every review zings like it should. You’ll roll your eyes at some of the haikus. Enid Yobigh’s piece on the Soft Bulletin elides the album entirely and stretches into a preach-to-the-choir rant about the Flaming Lips in general. And there are some fine opportunities missed – like how did the team fire three missiles at the Beatles (four, if you count the assault on John Lennon) and completely miss the Rolling Stones? Me, I lament not tearing into Bad, Michael Jackson’s post-Thriller blockbuster that won Americans’ hearts all over again after a razzle-dazzle documentary aired on ABC back in 2012.

I did lend some words to 101 Albums, though. From the moment True announced the book, I knew I’d write something – but once I signed on, I had to think about what album I truly wished could die. Part of me wanted to follow Scott’s lead and snipe out some critical darling of the white boy’s canon, but no red flags came to mind. I didn’t grow up and hang out with other hipsters, after all. That’s when I thought about Imelda May, the Irish flirt that peddled her homogenized jazz to the greater Atlanta area one morning and charmed my easily-impressed mother enough to buy her latest album, Love Tattoo. I didn’t know if she’d be a worthy target for the book. I just knew I hated her flouncy guts.

But the community said yes – and so with several lyric sheets, a pent-up rant on burlesque, and the most terrifying memory I could muster of my dad, I launched into my review. I reckon it came out OK. My middle name’s printed incorrectly at the end of it, and if I had been asked first, my middle name wouldn’t even be there, but so it goes.

Few blogs these days burn with as much vindictive power, and as such their writers will fade from collective memory. 101 Albums, on the other hand, is a readymade treasure begging to be read, a collection of distinct voices (not just ET’s) that affirm the stance of anyone who define themselves through resistance.

You can order your copy of 101 Albums, along with some of Vanoli’s prints, here.